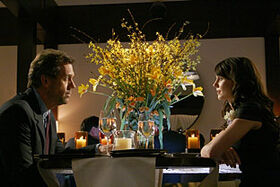 "But here’s the thing. Humiliation comes in all kinds of packages. People finding out that your son’s a perv, that’s…. that’s pretty high up there. People finding out that you’d rather let your son die than sign a piece of paper… where does that rank? And trust me, if I have to paste up a sign in every nail salon and dumpling shop in Pennsylvania, I’ll make sure they know"
―.House

Love Hurts is a first season episode of House which first aired on May 10, 2005. When House snaps at a patient in the clinic, the patient appears to suffer a stroke as a result of the confrontation. To avoid legal trouble, he agrees to take the patient’s case. However, when none of the easy answers are right and the patient soon gets worse, House has to push past the patient’s lies to find the right diagnosis.

House is in a clinic exam room with Wilson and a "patient" who does not appear to be ill, watching a baseball game. Wilson is trying to learn the condition set by Cameron for her return to work. House has agreed to her request for a date. After he walks out of the exam room, he lashes out at Korean patient Harvey Park (John Cho) who he mistakenly believes has spilled urine on him, but it is actually only apple juice. When he goes back to apologize to avoid the inevitable suspension, he realizes the patient is having a stroke.

Chase and Foreman are surprised, but glad, to see Cameron back. The team is unable to perform an MRI because Harvey has a steel plate in his jaw. As Foreman attempts to take his medical history, he is continuously interrupted by Harvey's accompanying female friend. Foreman requests that Harvey provide his own answers. When he describes his teeth grinding, Harvey exhibits a condition called nominal aphasia (in which relatively simple words, i.e. nouns, cannot be recalled to mind easily). Harvey has been to a number of alternative medical practitioners. Annette says that Harvey first saw an acupuncturist, who sent him to a Shen balancer, who referred him to a homeopathic doctor, who sent him to a chiropractor, who sent him to a naturopath, who sent him back to the acupuncturist.

Foreman asks Chase if everything's ready for the angiogram. Chase says that Cameron's doing the EMG first. Chase asks who the woman with Harvey is. Foreman says she's his guru, but Chase scoffs, "That's what she called herself?", but Foreman says that’s just from how she acted.

Before Cameron begins the EMG, she explains to Harvey that it may be painful having needles inserted into his arm and having him flex his muscles. The machine will measure the electrical impulse exerted my his nerves. If it is too painful, she can pull back. He tells her no, that he can handle the pain. As she inserts the needle, Harvey smiles slightly, seeming to enjoy the sensation.

Cameron briefs the team on the clean EMG. House says his symptoms could be the result of treatment from one of the alternative medical practicioners. Foreman says the only abnormal result was a mitral valve prolapse in the echo report. A clot could have formed on the faulty valve and gone to his brain, causing a stroke. Chase says it could be an aneurysm due to trauma, but Foreman dismisses it. House picks up a magic 8 ball and shakes it while sarcastically wondering out loud if he should go with Foreman's theory, which is marginally supported by medical tests, or Chase's theory, which is completely unsupported by medical evidence. Unsurprisingly, House goes with Foreman and prescribes blood thinners and antibiotics.

House, Cuddy, and the hospital's lawyer go to Cuddy's office with Annette. She insists that Harvey was in no real danger and the asphyxiation was to reduce his anxiety. House insists she be barred from the hospital.

Cuddy finds out about Cameron's interest in House, and surprisingly expresses approval. She tells him he should wear his sky-blue shirt for his date with "the only female that can tolerate" him.

Harvey starts to develop weakness on his right side, indicating mini-strokes, and the blood thinners are discontinued. The team then plan surgery to repair what is most likely damage to his arteries from the strangulations.

Cameron asks House what would be appropriate clothing for their date. After teasing her about paintball, he tells her he has booked a table at a nice restaurant. However, he still asks if she has any spandex.

The lawyer says House will need a court order for the surgery since the patient refused to consent. The patient had said his parents were dead, so they need proof of this to get a court order. The team discusses where to look for an obituary for the parents. House realizes they must still be alive, since they're accountants but Harvey lives in a slum. House sends them to the patient’s apartment to look for leads.

Foreman tries to talk House out of getting involved with Cameron. He tells House to be himself (a jerk) because if he lets her down easy, she'll just fall for him more.

Chase and Cameron are examining Harvey's apartment. They are shocked at the S & M gear they find, but see nothing that would explain the symptoms. Chase finds a drawer full of Tic-Tacs and pockets a few packs for himself. Cameron finds a high school yearbook.

Back at the hospital, Cameron, Chase, and Foreman are calling people who might be their patient's parents. When Chase finds them, they hang up when they hear their son's name. House calls them back and lies to the parents by telling that that Harvey is dead and they need to identify the body.

When Mr. Park and Mrs. Park arrive, they are angry about being deceived and are intensely embarrassed about Harvey's fetishes. They have been estranged from their son for some time. Only when House threatens to expose their callousness to their entire community do they finally give their consent to Harvey's necessary treatment.

Wilson is worried about House getting hurt, and goes to speak to Cameron. He advises her to go easy on him, explaining that if he opens up and gets hurt again, there won't be a next time.

As House is preparing for his date with Cameron, Wilson tells House to compliment her earrings and shoes and then ask about her dreams, hopes and aspirations. House takes a corsage out of the refrigerator, commenting on how lame it is. Wilson says that Cameron likes "lame". Cameron loves the corsage but when she realizes House is attempting to be different, she tells him she has one chance and wants him to tell her honestly what he thinks of her. The date appears to go downhill from there as House tells Cameron he believes she is only dating him because she likes men who need to be fixed and what he is what she needs: he's "damaged".

The surgery goes well, but Dr. May finds no aneurysm or other cause for the strokes. Meanwhile, Cameron tells Chase and Foreman about the date; she says they had a nice, candid conversation and that she doesn't know if there will be another date. House tells Wilson how the date went: nothing too intense, mostly small talk. He also says he doesn't think there will be another date.

They still don’t know what is causing the strokes. However, when he sees another patient using a breath freshener, he remembers that Chase is eating new mints. Chase says he got them from the patient's apartment, where he has a whole drawer full. House realizes that the patient is using large amounts of mints to cover up bad breath. House has Chase smell Harvey's breath, which he says smell like old vomit. House says that the patient has ulminating osteomyelitis, an infection of the jaw, likely resulting from the original break not healing properly. Pieces of infected tissue kept breaking off, impeding blood flow to the brain. House inserts a syringe into Harvey's jaw, extracting fluid, proclaiming that "we have pus."

The pus and infection in the jaw are causing the strokes. House has the jaw surgically repaired. When he goes to check on Harvey post-op, there is a woman in scrubs there - it's the dominatrix. House says hello to her, asking her to stay because he wanted to speak to both of them. He tells them that the strangulations must stop or the patient will die. Annette explains that it isn't about pain, it's about being vulnerable. She says that when you can be that open, that trusting of another person, it changes you. Harvey asks about his parents, but House doesn’t answer.

Later, House is in his office, wistfully gazing at a photograph with worn edges.

A senior woman comes to the clinic complaining of vaginal pain that is exacerbated by urination. House finds some vaginal tearing. She complains that her husband Myron, who is now trying Viagra, has been a little overeager with her. House prescribes a hormone replacement to increase vaginal lubrication. However, when Myron (Peter Graves) comes back for a refill, House finds out that he is feeling the pressure to perform. House prescribes blue pills that aren't Viagra instead. They both return later to complain the new pills weren't working. House admits that he prescribed acetaminophen. House makes them admit the fact that they both want less sex. House then realizes from their different wedding bands that they are married to other people and are having an affair. They settle their differences and House tells them they can go drug-free for a while.

Chase: "He’s so, he’s so old!"
Cameron: "And you’re so young"
―(Expressing disbelief that Cameron came back to the hospital for House)

Cameron: "According to Freud, and I’m paraphrasing, instinct of love toward an object demands a mastery to obtain it, and if a person feels they can’t control the object or feel threatened by it, they act negatively toward it. Like an eighth-grade boy punching a girl"
House: "I treat you like garbage, so I must really like you. Given your Freudian theory, what does it mean if I start being nice to you?"
Cameron: "That you’re getting in touch with your feelings."
— Cameron, on why House treats her so poorly.

Cameron: "We had a nice, candid conversation."
House: "Nothing deep, mostly small talk."
―House and Cameron explain their date to their friends