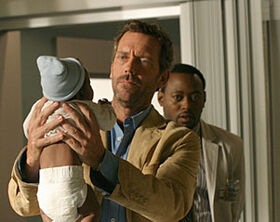 Maternity is a first season episode of House which first aired on December 7, 2004. When a newborn has a seizure, followed by another newborn that becomes ill, House believes a virus is spreading through the hospital, but Cuddy doesn't buy it. House and his team race against time to diagnose the illness, but the treatment may be lethal to some of the newborns if their diagnosis is incorrect.

The parents of a newborn are discussing what to call her when the baby starts spitting up, even though she hasn't eaten. They call the pediatrician to examine her, and he realizes the baby is having a seizure.

House is diagnosing the problems on a medical drama when the pediatrician comes in. The pediatrician and another doctor start talking about the sick baby, and House leaves the room. He goes to intensive care and finds two babies with similar symptoms. He thinks it is an infection. Wilson thinks they are unrelated, but House has an explanation for what differences that they do have. House goes to Cuddy to ask the two patients be put in isolation. Cuddy thinks the other doctors are right but House is standing by his opinion and says they have an epidemic. However, Cuddy says two sick babies don't prove an epidemic.

House gets his team. They go to look at all the other babies in the maternity ward. All of the other babies are fine. However, House finds another sick baby on another floor with the same symptoms. Cuddy starts directing women in labor to other hospitals.

There are now four sick babies, and they are getting worse. They can't find anything in common. Cuddy goes to swab surfaces for infections. House starts to think what the disease might be. House orders two narrow spectrum antibiotics for the two most likely resistant bacteria.

They do an MRI on the babies, but find nothing. They start them on antibiotics. Cameron tells one of the parents that the baby is very sick, but Foreman has to step in to tell them how bad it is. One of the parents says they had a cold, but Cameron rules it out because the child was healthy at birth.

Foreman challenges Cameron about not being up front with the parents. Cameron tells Foreman it's easier to die than to watch someone die.

Cuddy is still looking for the infection by swabbing surfaces. She admonishes a doctor for letting his tie flop around over all the surfaces, spreading any possible infection.

The antibiotics are shutting down the babies' kidneys. However, they can't decide which antibiotic to discontinue. House tells them to withdraw one antibiotic from each of two patients. However, this will mean one of them is likely to die. His team challenges him, but House makes it clear he knows what he is doing.

Cuddy and the hospital's lawyer challenge House's decision. House can't get informed consent because the parents would have to know. The number of patients is now up to six. The lawyer doesn't want to do it, but Cuddy lets House go ahead.

Cameron and Foreman tell one set of parents each that they have to discontinue one of the antibiotics. Foreman is straightforward, but Cameron is evasive.

Wilson asks Cameron if she told the parent how sick the child was. He upbraids her for not preparing the parent for the worst possibility. However, she snaps back at him that it won't matter what she said if the baby does die.

Cuddy is finding more contamination, but nothing related to the illness.

One of the parents finds Chase and tells him she's afraid her marriage might break up if the child dies. He tells her not to get ahead of herself. At that point, one of the babies goes into distress - the baby of the woman Cameron talked to. The baby goes into cardiac arrest. Chase and Foreman work hard, but can't get the heart beating again. House calls off the code blue and calls time of death. They realize that the other antibiotic, Vancomycin, is the one that will work. House tells Cameron to tell the parents, and tells Wilson to make sure she does.

Cameron goes to see the parents, but freezes up, leaving Wilson to tell them The mother starts crying. House is angry at Cameron and at Wilson for letting her get away with it. However, at that moment, Chase comes and tells them the Vancomycin isn't working either. They think it might be Vancomycin resistant staph, but it's very rare. House blames the medical profession for overprescribing antibiotics. However, then he wonders why the dead baby's blood pressure was so low before it died. The only explanation is heart damage. He sends his team home and starts an autopsy on the dead baby.

House shows the team the autopsy results - it's a heart virus. Foreman notes that there are thousands of possibilities. However, they can't draw enough blood to test for them all. They start eliminating possibilities and getting likely candidates. Even Cuddy is helping. They narrow it down to eight and get a sample from an uninfected baby as well.

All the infected children are antibody positive for three viruses, except the healthy baby which only had two. However, House realizes the antibodies are from the mothers. Foreman goes to take blood from the mothers. They rule out everything but Echovirus 11. Foreman tells the parents that the only possible treatment is experimental. Cameron lets the parents help when they change the baby's bed linen.

House wants to speak to Foreman about how Cameron is doing. Foreman thinks she is doing fine.

Foreman checks the patients - they are getting better. He and Chase give the parents the news.

House goes to see Cameron. He thinks she's had personal experience with death. He asks her where she got the idea to let the parents help. She doesn't want to talk about it. As she's leaving, she sees one of the families getting ready to leave and brightens up.

Wilson finds House wondering where the virus came from. He finally sees one of the volunteer women who hands out teddy bears coughing. He realizes all the sick babies had a teddy bear.

A patient is exercising but not losing weight. House tells her she's pregnant. She thinks it's impossible because she's on a birth control implant, but House tells her it didn't take. She tells House the baby might not be her husband's. House tells her to have the baby if the boyfriend looks like the husband.

The woman comes back with her husband to get his blood tested for a paternity test on the pretext she has mononucleosis. House schedules a test. He realizes that she may want to have an abortion if the baby is her boyfriend's.

The tests show that the baby is the husband's. The patient is grateful and wants House to deliver the baby, but House wants to be done with her. However, he uses her as an excuse to hang out in the lounge reserved for maternity ward doctors.

The title of the episode comes both from the fact that most of the case takes place in the maternity ward and from the case of the clinic patient.

Echovirus is a common infection, and just about everyone gets it at some point during their life. It is generally only dangerous to infants.

The antiviral drug used to treat the newborns is most likely Pleconaril, an experimental pharmaceutical for Picornaviruses (which include Enteroviruses).