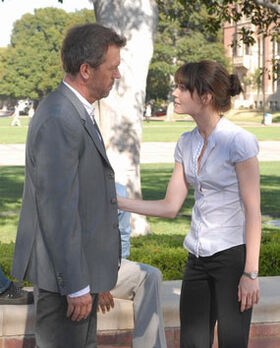 Meaning is the premiere episode of the third season of House which first aired on September 5, 2006.

An uncommunicative man who had been treated for brain cancer and is currently confined to an electric wheelchair suddenly drives the wheelchair into his family's pool in an apparent suicide attempt.

Meanwhile, thanks to the fact he was treated with ketamine during treatment for his gunshot injury, House's leg is pain free and he is jogging eight miles before coming into work each morning.

Cuddy and Wilson are discussing cases that they think will interest House. They are astounded that House has run to work. Although it's only been eight weeks since he was shot, House is raring to go. Cuddy tells him that she has a 26 year old woman who is paralyzed despite no obvious injuries. He also agrees to take the case of the guy who drove into his pool even though there does not appear to be any real diagnostic problem.

House's team welcomes him back. They start a differential on the paralyzed woman. Suddenly, House sees his own blood on the carpet. He says he wants to keep the stain. He then starts on what to do about the wheelchair bound man, and suggests tendon surgery to deal with pain from his atrophied muscles.

They proceed with the surgery on the wheelchair patient. His family is denying he would try to commit suicide; they think he was confused. House thinks it is promising the father attempted suicide because it shows his brain is still active. The wife thanks House, astounding Cameron, who has never seen a patient thank House. When she demands he tell her why the wife thanked him, House avoids answering by quickly running away.

The woman's muscle and nerve control are slowly getting better. House burns her to show she can move, and claims that she is faking. However, the patient denies that she's faking. House orders her to be discharged.

Wilson is also astounded that a patient thanked House. House admits he didn't have any emotional response. Wilson said it will come back.

Cameron comes to say the woman patient is having trouble breathing. House threatens her with a needle but she continues to have trouble. He then notices something on her neck. He puts her on her back and draws blood, showing it's a heart problem.

The team has to keep drawing blood from around her heart. House suggests exploratory surgery to look for a spinal tumor, even though they don't know exactly where on the spine to look.

House goes to see the wheelchair patient. Cameron sees House being kind to the patient and teases House about it. He astounds Cameron by asking her out for a drink. Cameron gets very uncomfortable until House tells her he did it to prove she was only interested in him while he was ill.

House goes to see Cuddy. She won't let him do the exploratory surgery because it's too dangerous. When House tries to bargain, Cuddy pulls rank.

House turns his attention to the wheelchair patient. He wants to discharge him. His wife is grateful that House treated his pain. House asks why she hasn't institutionalized him. She says she wants to take care of him; House thinks she does it because not taking care of him would make her miserable. As she goes to get him out of bed, House hears him make a noise. He asks the patient to do it again. He tells the wife that her husband was trying to talk.

House brings the wheelchair patient's medical records to the team. He tells the team he spoke, but they realize he grunted. He orders them to review the patient's medical history. Wilson accuses House of being bored while House attempts skateboard tricks. Wilson tells House to tell the wife the patient just grunted, but House refuses. Wilson leaves and, after he does, House grabs his right thigh in pain.

The team is dissecting the wheelchair patient's medical history and finds 214 symptoms, all of which go on the whiteboard. However, even Chase is able to eliminate all possible unusual diagnoses. Cameron thinks the symptoms are essentially random and don't show any underlying disease. House decides to perform an endoscopy to look for infection. Chase does the procedure, but the patient can't even respond to simple commands. The patient's throat collapses during the procedure, just as the team warned. They manage to get him breathing again.

House can't understand why the patient gagged during the endoscopy while he was under anasthetic. House denies it was a spasm, that his throat locked down. House wants to look into his brain for cancer, but the amount of dye necessary would be life threatening. House tells the wife that if it is cancer, it is a new cancer. When the wife asks if the husband could get better, Cameron shouts "No!". Although the wife realizes the test is risky, she admits her husband is all but dead and consents to the test.

The team starts the procedure and injects the contrast material. Unfortunately, the patient starts bleeding from his ear, again as the team predicted. Worse yet, the scans show nothing. House wants Foreman to review his previous radiology. Finally, the team has had enough and refuses to help with new tests.

Cuddy confronts House about his judgment. He points out that House never says he wants to help someone, he comes in with a prediction of catastrophe. She orders the patient discharge. Even Wilson refuses to help him. House then admits to Wilson his leg hurt, but has since gotten better. Wilson tells him it's nothing more than aches from the running and skateboard tricks. He refuses to prescribe him Vicodin. He accuses House of trying to get high either from drugs or solving problems.

House goes jogging and stops by a fountain to cool off. He then gets an idea and runs to Cuddy's house. He wakes her and tells her that the patient dove into the pool because he was overheating. He thinks he has hypothalmic deregulation - Addison's Disease. He asks her to inject the patient with cortisol. Cuddy blows him off - she says he is guessing, not acting on evidence. He tells her there is no risk to the shot. She tells him he has to learn to hear the word no.

Wilson finds House despondent in his office, expecting him to try to inject the patient instead. House admits he had no reason to think he was right.

Cuddy meets the patient as he is leaving. She gives him a shot of cortisol. However, the patient doesn't respond right away. Cuddy is despondent, but all of a sudden the patient starts moving and releases the seat belt on his wheelchair. He then stands up, although with difficulty. His wife and son rush to him.

Wilson tells Cuddy she can't tell anyone. She admits she had no medical reason to inject the patient. Wilson reminds Cuddy that House was just lucky this time, and if he tells House, he won't back down. When Cuddy says she can't do it, Wilson reminds her everybody lies.

The episode ends with a scene in which House enters Wilson's office and takes one of Wilson's prescription pads, writing himself a prescription for Vicodin. This foreshadows plot developments that will occur later in the season.