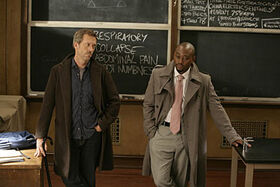 Mirror Mirror is a fourth season episode of House which first aired on October 30, 2007.

Two young men plan a mugging, but when they approach their intended victim, he insults them. Then, they threaten him and the victim starts coughing and collapses on the street. They steal his wallet. One of the criminals calls 911 for an ambulance before they flee the scene.

House meets with the applicants, who start suggesting diagnoses. Cuddy and Foreman come in - Foreman has been re-hired. Cuddy insists he be added to keep an eye on House. House orders a treadmill test to see why the patient is having difficulty breathing.

Foreman apologizes for Cuddy humiliating House, but House knows why she did it. House says he's going to make Foreman quit again by making him miserable, but Foreman won't quit - he says he's already miserable.

The applicants put the patient on a treadmill, but he starts having pain and can't complete the test.

The applicants find out there is a betting pool on them. They start betting heavily on each other.

Foreman is leading a differential with the applicants when House comes in. House reminds Foreman he quit because he didn't want to become like House. He asks Foreman why he came back. House announces to the room that the patient has crashed and the applicants leave. After the applicants leave, Foreman admits no-one will hire him because they think he's as dangerous as House - he wants to quit, but he can't find a job.

The applicants treat the patient. House comes by and tells Foreman that he will make Cuddy miserable instead. Foreman thinks it is Munchausen syndrome - the patient's symptoms match those of other patients in the hospital. However, given the same information, House thinks it is Mirror syndrome - a disease where the brain copies the surroundings because the patient has brain damage and has no sense of self.

House goes into an operating room with the patient, who can't answer questions about himself. Wilson tells House to stop making power plays - he's threatened by Foreman and afraid of Cuddy. The patient starts acting like Wilson, confirming House's diagnosis. They then find out that the patient's blood has started to congeal - he needs to be heated. House points out to Foreman that the patient can't possibly be faking the symptom.

House starts talking to the applicants about Mirror syndrome. They start talking about why his blood congealed with the cold. The applicants start talking about how to do tests. At that point, House tells the cafeteria they have food poisoning and Tell them to go to the clinic. Foreman tells them that House is lying, but House tells them that Foreman is an affirmative-action hire. The people in the cafeteria head out, and House sends his applicants off to do tests. He sends Cole to find the car, but Thirteen volunteers to go with him. House comments sarcastically that they have a love connection, and leaves.

Amber finds a way to draw blood from the patient, who starts acting like her- he says that he always has to be right if nobody likes him, otherwise he's worth nothing. Taub does an ultrasound, and the patient starts acting like Taub wants to have sex with Amber. Taub says that he's married, and that Amber is a little too aggressive, but the patient says that aggressive is never a bad thing. Taub find a lesion on the liver. House and Wilson discuss the lesion. Wilson is making fun of House because the patient was mirroring him instead of House- Mirror syndrome patients mirror who they think is in charge. House tries to counter the comment by saying that since Wilson was the surgeon, he was in charge, but Wilson teases him by saying that House would pick up his laundry if Wilson asked him. House tells him to ask, but Wilson refuses. They enter the main room where House lectures his applicants, but there's nobody there. They wrote the word 'Clinic' on the white board backwards as a clue.

House goes to the clinic to get his applicants, but Cuddy keeps them there to deal with House's lie about food poisoning. House starts going around to his applicants, and asks them for ideas. He gets back at Cuddy again by ordering expensive tests for the uninsured patients.

Brennan is doing tests when the patient starts acting like he doesn't want to be working in a hospital. He finds that the patient may have pus from fungus. He orders treatment for it. House asks why he let Amber administer the drug. The young doctor did it because he thinks House will eventually let him go. House reminds him that he has to stick around even though he really wants to work in the third world. House tells him that he's a good doctor and should stay. He instead says he will leave in an hour when the patient is better.

Amber and Number 6 once again find the patient's blood has started congealing. The patient needed to be reheated. It turns out the fungus diagnosis was incorrect - the pus was congealed blood. They start talking about diagnoses. House wants to do a medical history despite the patient not remembering who he is.

Number 13 and Cole have found the patient's car, but it is behind a locked fence with two angry dogs. When House calls them, and asks them what's taking them so long, Thirteen says that the car was towed and the yard's locked - they can't get the key. House responds that it's why he sent two of them - one breaks in, the other posts bail. When Thirteen says that getting arrested isn't what she's worried about, House says, "Not a problem. You know how to kill dogs, right?" and hangs up. He then orders the team to test the patient for antibodies. However, Foreman says he hasn't signed off on it. The applicants ignore him. Taub apologizes to Foreman for the way they are treating him.

Foreman goes to see Cameron - the odds on Foreman are even, but Cameron has bet in his favor. She reminds Foreman that he loves his job and, even though the job is crazy, he should keep doing it.

Number 6 draws spinal fluid for the antibody test, and the patient starts mirroring him- when 6 tells the patient that drawing the spinal fluid might hurt, the patient tells him to bring the pain. 6 says he isn't a masochist- he merely likes new experiences. The patient says that he doesn't just like new, he has to have new- if he acts like everyone else, then he's not an individual anymore. Then the patient comments that he likes hot tubs.

Wilson finds Cuddy trying to prank House by replacing the Vicodin with laxatives. Wilson tells her to make House think he has beaten her. He finds out Cuddy has already pranked House somewhere else.

They start talking about where patient might be from, but Foreman belittles the clues. They are still having problems keeping the patient warm enough, so House orders a procedure that could give him a severe fever. He goes to Cuddy for approval when Foreman objects. She pretends to object and then give in, but House realizes its a trick. He also says he can tell the difference between Vicodin and other pills. He says he wants Foreman gone.

Foreman starts to induce the fever, and, like Foreman, the patient starts expressing both doubt and excitement- he says that although Princeton-Plainsboro is weird, he's happy. All of a sudden, the patient collapses. They have to get him out of the water and dry him off to shock him. Once again, Number 6 is quick with the defibrillators. He resuscitates the patient, but electrocutes himself.

Number 6 recovers, and House compliments him on saving the patient, and then calls him insane. They start discussing whether to biopsy the patient's heart.

House tells Foreman he has found him a job in Boston, but he turns it down. House is angry and tells him to do the biopsy himself.

Number 13 and Cole find out who the patient is, but there is no useful information apart from the patient's name. House is annoyed that they spent so long finding the car when they barely found anything useful, and asks Thirteen why she went with Cole. He thinks that Thirteen didn't want to have the patient mirror her, and decides to make her do the heart biopsy instead.

House tells Foreman that they'll do the biopsy and Foreman leaves. House makes Thirteen do the biopsy. The patient starts acting like House, making sexual comments about how hot Thirteen is, but House tries to pretend that she's his boss. After the patient says, "This is so frustrating," Thirteen says that she doesn't think he's mirroring her, and House realizes that he has to leave, since the patient won't mirror Thirteen while he's there. After House leaves and Thirteen completes the biopsy, the patient starts acting like he is very scared. Thirteen tries to reassure him by saying "It's OK. It's going to be OK," and the patient responds with, "No. No, it's not." House tries to get 6 to go in to see what the patient says about Thirteen. He threatens to fire 6 if he doesn't, but before 6 can, Thirteen walks out.

House asks her how the patient is, and Thirteen says that his fever's at 106. House cuts her off and how the patient was when he mirrored her, and she says sarcastically that 'He's delightful- he loves the smell of freshly baked rhubarb pie and isn't afraid to love.' Then she follows it with, "Also, his rash is coming back.' 6 says that the patient needs the meds and the tub to keep him stable. House agrees, and 6 makes a comment about how the patient will be happy- he loves hot tubs. House thinks that 6 likes hot tubs and the patient was mirroring him, but 6 mutters that he hates hot tubs. Once they've established that no one else was there, House is angry that 6 didn't mention it, but 6 says that he didn't think it was relevant. House says that they need to 'splash him some more', meaning they need to jog his memory.

House comes in. He announces the patient is a farm equipment salesman and merely needs antibiotics to cure him of an infection commonly caught from pigs. They go to give the patient the treatment, but Foreman has an idea. He puts House and Cuddy in the room with the patient to see who is dominant. The patient starts acting like House - he makes a comment about Cuddy's breasts.

House tells the applicants they all suck - they all made mistakes. However, House decides not to fire anyone. Foreman asks why he didn't fire anyone. House says they are all good doctors. However, he points out that because none of them got fired, they all lost their bets to Chase - House got 50% of the take by fixing the results. However, House notes something else - all of the applicants and Foreman got insights into their personality from the patient, but Foreman is the only one who took advantage of that insight.

Is there really such a thing as Giovannina Mirror Syndrome?[]

It took a lot of searching, but there is a reference here to a patient similar to the mirror patient in this episode. That patient had a frontal lobe brain injury and it manifested itself as acting out a certain social role depending on the environment. The doctors believed that the injury to the frontal lobe, which controls inhibitions, allowed the patient to abandon his own identity in favor of one that worked better in the circumstances. It appears our own frontal lobes are vital in allowing us to keep our basic identity in social situations.