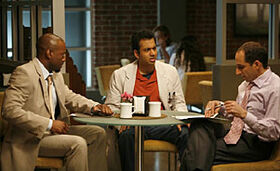 No More Mr. Nice Guy is a fourth season episode of House which aired on Monday, April 28, 2008. House suspects an emergency room patient has a bigger problem than the E.R. initially diagnosed based on the fact that the patient is too nice. A skeptical House questions the patient's sunny disposition as the team tries to get to the bottom of his illness, but disagrees with House that niceness is a symptom. Meanwhile, House and Amber are at odds about how much time they each get to spend with Wilson, and Cuddy demands House give his team performance reviews.

After defusing a confrontation on a picket line, one of the picketers collapses.

The hospital is in chaos - it's the nurses on strike. House shows up in the emergency room to hide from Cuddy during the crisis. House notices the picketer, sitting quietly and smiling. House gets confused about why the patient isn't upset that he's been sitting there long enough to get two meals. House hits him with his cane and the picketer brushes it off as an accident.

House gets interested and calls together his team. He's wondering why the patient is being so nice - he's been acting that way for 11 years. Kutner thinks he's just an outlier - an unusually nice person - the anti-House. The team thinks niceness is not a symptom, but House thinks otherwise and orders an environmental scan and tests.

House goes bowling and invites Chase. Chase wonders if Wilson is busy that night, and House confirms he's with Amber. House is planning to break them up. However, Chase doesn't think House is up to the challenge.

House goes to Amber and Wilson and proposes joint custody. Wilson tells Amber that House is being reasonable, which is not like House. Amber and House start negotiating. Wilson stays uninvolved because he knows if he takes sides they won't be able to work it out.

Kutner and Foreman do the environmental scan. The patient turns out to be a very nice guy, helping out with charities.

Kutner and House start to talk about the case. House goes to the patient and starts insulting his wife, and the husband doesn't react. He thinks the patient has William's syndrome, a genetic disorder that makes patients lack suspicion. However, the team points out that the patient has none of the other symptoms, such as low IQ (he's a carpet cleaner) and elfin appearance (he's obese). It's clear to everyone when he starts singing (Williams patients have perfect pitch) that he doesn't have it, but the patient suddenly has a stroke.

House admits he was wrong and starts giving his team their performance reviews, but it's just a copy of Wilson's review. House thinks it might be syphilis, and Kutner agrees to test for it. Foreman notes that House is intimidating Kutner, and he also agrees to do the real performance reviews.

The patient doesn't think he has syphilis and he trusts his wife.

House screams at Wilson and Amber for being late. They were late because they had sex.

Foreman meets with Thirteen. She tries to convince Foreman about her diagnosis, but Foreman gives her a performance review. When Kutner comes in, he tells Foreman that House was right - the patient tested positive for syphilis.

Taub talks to 13 about how married people feel when one of them has an STD. The patient figures that his previous syphilis test was wrong. The wife denies having an affair to Kutner. She tells Kutner why she's in love with her husband - his niceness made her a better person. She doesn't think her husband will change. Kutner tells the wife to get tested for syphilis. Foreman does Taub's review. Taub does Foreman's review. Taub and Kutner tell Foreman that House only let him do it to screw with him.

House and Wilson are enjoying a night out. Wilson doesn't want to get drunk to prevent impotence. The team calls House that the patient is continuing to get worse. House admits he's getting Wilson drunk so he will get into a fight with Amber. Wilson leaves so Amber doesn't get mad at him.

Kutner thinks if personality is a symptom, House must also be sick. Kutner runs tests and finds out House has syphilis too.

The team finds House in his office watching TV, and tell him the patient has hepatitis. They then tell House his has syphilis. They give him a prescription and leave. They tell Cameron and Chase, who think that the syphilis may explain his personality. They wonder if the cure will change House's personality or brain. Chase wonders if Cameron slept with House.

Amber and House fight about House getting Wilson drunk. Amber threatens to get rid of House. She adds penalty clauses to the shared custody agreement. House sends Amber out to talk to Wilson alone. House is afraid Wilson will tell Amber what he wants to tell him.

Foreman gives House his performance review. He asks for authority over the team. House tells Foreman he has to humiliate him in order to get the rest of the team to fear him. Kutner tells House the test for sarcoidosis was negative. House orders him to test for everything he can think of.

The patient is more combative, screaming at his wife. He suddenly has a heart attack.

House gives Kutner the chance to write on the whiteboard. They try to explain the patient's rage. 13 keeps pushing for PFO. House pressures Foreman to decide who's right, and he sides with 13.

They discuss why House seems to be getting nicer. 13 notes that House now has no opinions.

Wilson promises not to tell Amber, and House tells Wilson he faked the syphilis by swapping out a blood sample. He's pretending to get nicer. He invites Wilson to go bowling.

Amber tells the team that House doesn't have syphilis.

Kutner finds House and confronts him about faking the test. He admits Amber told him. However, Kutner also has a theory - the patient doesn't have syphilis either. Kutner thinks it is Chagas disease from the patient's time in the Peace Corps. He would test positive for syphilis if that were the case, and it explains the other symptoms. House can't do anything but agree.

They go to tell the patient, and also tell him his personality will probably change once he is cured.

House brings reviews to Cuddy. Cuddy notes that the reviews are identical. There is also a review of Cuddy. The nurses' strike is over. Cuddy rules that Amber and House are both to be penalized for breaking the joint custody agreement.

House and Amber are punished by having to deal with the care of comatose patients.

The bowling scene is faked. Chase throws a Brunswick Twisted Fury down the lane. On the last shot, it cuts to show him striking again, but as House walks away and the scene zooms out to showing Chase, you can see that he actually only got six. The strike was not actually bowled by Chase. You can also tell because in his first shot, the ball is in the middle of the lane by the time it reaches the end of the camera, but when the angle switches, the ball is on the outer portion of the lane, and hooks in. When Chase threw the ball there was almost no rotation on it yet the ball has high revs when the strike is shown.