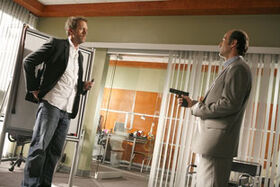 No Reason is the final episode of the second season of House which first aired on May 23, 2006.

While doing a differential on a patient with a badly swollen tongue, a man claiming to be a former patient of House comes in and shoots him twice.

House wakes up in intensive care and finds Cameron next to him. Cameron lies that she hasn't been there the whole time. She tells House about the bullet wounds. He asks about the patient with the swollen tongue. She tells him that they haven't diagnosed him yet. They wheel in the shooter, who has been shot by security.

House decides to walk out of the room, his leg pain killed by the morphine. He tells Cameron to biopsy the swollen tongue patient's lymph nodes.

House asks Cuddy about the shooter being in the same room. She tells him its unavoidable. Cuddy tells House not to up his morphine, but instead he is lowering it. He can't understand why his leg doesn't hurt when everything else does. Cuddy tells him to go back to intensive care.

The patient starts talking about his wife, who was a former patient of House. She survived, but the shooter had to admit he had cheated on her. However, that confession had nothing to do with her condition, and House told her anyway. She killed herself over the affair.

House goes to see the swollen tongue patient, and meets his wife. He is surprised that she is so much better looking than the patient is, but tells her that he might have an STD and asks her to confess to any affairs. She denies having any.

After the lumbar puncture, the patient starts bleeding into his eye, which starts to pop out. House notices at the time his own stitches have torn out, and he collapses on the floor.

House and the shooter are back in intensive care having breakfast. They discuss his (the shooter's) wife's suicide and why the shooter is blaming House.

House decides the swollen tongue is not an infection, it must be a bleeding disorder. Since his team won't discuss the case with him, he starts impersonating their reactions. He orders a biopsy of the blood/brain barrier. They start talking about STDs, and House says he doesn't think the wife is cheating. The team tells him that the patient doesn't have a wife.

House goes to Wilson about seeing a wife where none existed. Wilson tells House he may have imagined it and advises he rest. House wonders why he got ketamine during his surgery.

House goes to see Cuddy about the ketamine. The ketamine would have put him in a coma. Cuddy admits that they did it on the chance that his chronic pain could have been treated by putting him in a coma. House is still afraid the ketamine might have affected his brain. He denies having any neurological symptoms, like hallucinations.

House goes back to talk about the swollen tongue patient with his team. Chase understands that House believes that the infection may be spreading through the lymphatic system. The shooter wonders how Chase anticipated House, and that maybe House isn't as smart as he used to be. He points out that House is a rebel, but he runs with his own rule - that you have to be blunt and honest or else you're a coward. The shooter counters that being polite and having humility is not a bad thing.

The team comes in to see House. The test on the lymph nodes was negative. Chase is walking the patient to the washroom, where the patient's scrotum starts swelling with blood and bursts.

They can't figure out where the swollen tongue patient's scrotum blood came from. When House suggests the kidneys, Cameron points out that it's impossible - the kidney isn't connected to the scrotum. Foreman suggests testicular cancer.

House talks to Wilson about why he didn't think of testicular cancer and why he screwed up a basic anatomy problem. He thinks his brain is screwed up. Wilson suggests that House doesn't want a healthy leg, because then he would be happy. Wilson points out that persons incorrectly diagnosed with a terminal disease often get depressed when they are told they aren't sick. House wonders why Wilson isn't more upset about the ketamine. He goes to Cuddy to confront her about the problems with his thought processes and starts trashing her office and in a moment of rage, actually punches Wilson. He then realizes he's hallucinating. He's back in intensive care with the shooter. House realizes he has wet the bed.

The team comes in - the swollen tongue patient doesn't have testicular cancer. They start walking down the stairwell, and House wonders how they all got there.

House goes to Cuddy again to tell her he thinks he is losing his mind and having blackouts. He takes himself off the swollen tongue case. However, he then realizes that Cuddy knows about his last hallucination, and that he must be having a hallucination at that time too. He finds himself back in intensive care again.

House is talking to the shooter about how he can tell what's real. The shooter discusses whether or not it makes a difference, but points out that his team would stop him if he were doing anything dangerous.

House goes back to discussing the swollen tongue patient with the team. They talk about their basic assumptions. House starts discussing exploratory surgery, but Chase is opposed because of the bleeding problem. They discuss robot surgery, which is far more accurate than a human surgeon.

They take the patient to the surgery suite. House uses it on Cameron and stops the knife just before it touches her face and navel, and cuts a button off her shirt. The patient is still not convinced, but House tells him he will die without it.

House goes back to intensive care. The shooter asks him if he cares if he lives or dies, and tells him that House only cares about things he can measure objectively. House finally realizes what the problem is - his team isn't trying to take him off the case or argue with him. They also have the same knowledge he does. Chase goes to stop House, but House was thinking of hurting the patient, and Chase couldn't have known that. He deliberately kills the patient. The patient lies there without vital signs, but suddenly, a bullet drops out of the patient's hand and lands on the floor.

All of a sudden, House finds himself on a gurney listening to the emergency room personnel and Cameron telling them where he had been shot while they work to keep him alive. He tells Cameron to tell Cuddy he wants ketamine before passing out.