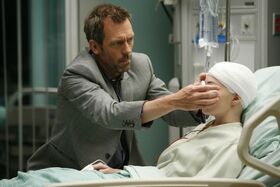 Not Cancer is a fifth season episode of House which is scheduled to air on September 23, 2008.

House and his team have to find out why recipients of donor organs from a particular donor are dying before the same thing happens to the last two recipients.

A young woman collapses suddenly on the tennis court. Elsewhere, a crane operator collapses in his cab. In an MMA bout, one of the participants collapses bleeding right after handing out a beating to his opponent without taking a significant blow himself. At a rehearsal, a music teacher playing the tuba coughs up blood before collapsing.

In a lecture hall, Thirteen bursts in. She asks the teacher if she had a cornea transplant. When the lecturer confirms it, she informs her that all the other donees are dead or dying.

Foreman is describing the symptoms to the team and House. The donees all received different organs, but none of those organs failed. Four of the six donees are dead, one is dying, and only one seems healthy. The donor died in an industrial accident. The autopsies provide no clues. House thinks it is cancer, but Foreman argues it can't be - all the symptoms are different and the tests for cancer were negative.

House is trying to make friends with another doctor who likes monster trucks. Foreman comes in to tell House the transplanted cornea needs to be removed. However, House thinks it is psychological. House gives an eye test to the healthy patient. However, she fails it. House thinks it is a brain problem rather than an eye problem. The patient starts hallucinating that they are going to remove her head.

The team is watching the MMA match. They know the tennis player had a heart problem. The crane operator's liver failed. Suddenly, the coffee repair guy chimes in. Kutner realizes that the coffee repair guy is not a coffee repair guy, and House tells them he's a private investigator he hired. The private eye starts telling them about the dead people because House had him check them out. It was the private eye who obtained most of the MMA footage. It shows that he may have had a temporal lobe seizure. House wants to do a brain biopsy on the healthy patient, but they decide on the sick patient. However, Taub can't get consent from the wife for the test. The healthy patient tries to lie to get her to consent, but all of a sudden the sick patient gets worse. He goes into cardiac arrest. Taub tries defibrillation, but can't save him. House tells Taub to make sure he saves the dead patient's brain.

They autopsy the newly deceased brain, but can't find anything. House thinks it must be cancer because metabolic diseases only attack a specific organ. Foreman thinks House merely wants a reason to consult Wilson on the problem. Kutner thinks a perforated intestine could explain the problems. House agrees its possible, but not probable. However, the living patient's colonoscopy was clean. House wants to do a colonoscopy on the donor's child. They get the mother's consent.

House checks out the private eye, who is keeping an eye on someone for House. However, the private eye realizes its a test - House doesn't care about the guy he's doing surveillance on and he really wants to find out about Wilson.

The child's colonoscopy was clean, so House still thinks it is cancer. Kutner suggests that they test the dead man's colon with water pressure. House agrees. Foreman is skeptical, but the procedure actually works. They can't find any leaks until Kutner turns the pressure up and the patient's internal organs explode onto Foreman.

The healthy patient is getting sicker - tachycardia and labored breathing. House demands a new idea, but no-one has any ideas. House decides to treat her for cancer even though they can't confirm it - it's clear she has something wrong with her. He goes to the patient to get consent for chemotherapy. He admits that he doesn't know she has cancer, but makes out like he's trying to do away with the placebo effect. The patient consents. The patient tells House that she used to be an architect, but gave it up after she regained her sight because she found out the world was ugly - having sight didn't make her happy.

House meets the private eye again. He starts telling House about Wilson. Cameron has been seeing him, but only to counsel him. Cuddy has been contacting him too. Wilson hasn't mentioned House at all.

The patient has started vomitting from the chemo, but her symptoms are improving. Foreman congratulates House for diagnosing cancer, but House realizes it isn't cancer.

House thinks it is a disease that acts just like cancer, just isn't. The tuba player was taking a drug that was for arthritis, but also attacks cancer cells. He died anyway. House realizes he's missing something. He goes to visit Wilson for a consult because he needs Wilson's ideas. Wilson tries to send him away, but House won't go. He admits he hired a private eye to spy on him. Wilson says he wants to move on and shuts the door.

House runs into the private eye, who listened to his breakup with Wilson. House admits Wilson was his only friend. The private eye tells him that things are what they are. House realizes the patient's seeing ugliness is a symptom. He wants to remove a part of the patient's skull and needs Cuddy's approval. She wonders why she is paying $2,300 for a coffee machine repair. House tells her his theory - the donor had cancerous stem cells. They masqueraded as proper cells in every patient, but because they were cancerous, they didn't perform their assigned function. He thinks that the chemotherapy is merely hiding the problem.

To keep House from trying to make the patient crash, she hires security guards for the patient. Cuddy continues chemotherapy. All of a sudden, the patient's heart starts to race - we see the private eye walking away from the patient's bed - he snuck in dressed as a nurse. House changed the chemo for saline. They start drilling into the patient's skull before they realize the trick. The private eye shows up and they watch the surgeons remove an anomaly in her brain.

The patient has her eyes bandaged, but realizes House is in the room with her. He tells her that her perception of ugliness was a symptom of her disease. The patient is astounded how different things look. She notices how "sad" House looked.