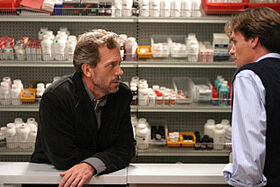 Occam's Razor is a 1st season episode of House which first aired on November 30, 2004. After spirited sexual intercourse with his fiancee, Brandon collapses, suffering from abdominal pain, nausea, fever and low blood pressure. House and his team cannot pinpoint Brandon's problem since there is no illness with this many symptoms. But then Brandon complains of pain in his fingers and House suddenly zeroes in on the cause.

A young man is complaining about his lack of sleep, scratchy throat and fever on the phone, but it is clear he is talking to his boss so he can skip work. However, he admits to his girlfriend he really does have a cough, and she notices he has a rash too. They start making love, but all of a sudden he starts having trouble breathing and collapses on top of her. She can't revive him.

The patient is taken to Princeton-Plainsboro. He has abdominal pain. Wilson is trying to get House to take the case, and House agrees - because the patient's blood pressure isn't responding to fluids.

House goes to his team, who starts a differential. Cameron notes no condition accounts for all the symptoms. House says the priority is to control his blood pressure. He orders antibiotics for sepsis and an echocardiogram. The girlfriend is upset that they are testing him rather than treating him.

House goes to the clinic. Cuddy notes he's late to clinic. House tells the waiting room he's bored and doesn't really want to treat them. He asks who wants him. No-one volunteers. They agree to wait for one of the other two doctors on duty. However, Cuddy assigns a patient to House anyway.

The girlfriend apologizes to Chase and admits they were having sex. She's afraid she's responsible because she was rough. Chase shares the information with the team. Foreman tells them to stop the antibiotics because the patient's test results are getting worse because his kidneys are shutting down from the treatment.

House notes the patient now has seven symptoms. Foreman thinks the treatment caused the seventh - kidney failure. Forman thinks it is a cardiac infection, but it only explains five symptoms.

However, House writes down several other conditions and realizes that nothing covers all seven. They start to think it might be two conditions, but Foreman disagrees. However, both conditions that explain the symptoms are rare. House wants to treat for sinus infection and hypothyroidism.

They start treating the patient when his parents arrive. The patient introduces his parents to his girlfriend and tells them they're engaged.

Foreman wonders why the other two are always agreeing with House. They say House is always right. Foreman isn't convinced and goes to test for viral infections. However, Cameron and Chase agree to help him. Chase and Foreman start talking about how attractive Cameron is. House comes in - he knows they were in the lab trying to prove him wrong. House tells them to test the patient's urine.

The tests show the antibiotics didn't cause the kidney failure. House informs them the patient is getting better.

House tells Wilson he criticizes his fellows to make them feel terrible because it will make them better doctors.

The patient is improving, but he still has a cough. Foreman orders some more tests. They show that the patient doesn't have hypothyroidism. Foreman goes to House and says it can't be two diseases and he still thinks he's right about the virus. House bets $50 and sends Foreman to do a white cell count.

Chase is pouring coffee, but spills some because he was staring at Cameron. They talk about her remark about sex killing the patient, and Cameron starts to get very graphic talking about the effects of sex on the human body. She stops when Foreman comes in. The tests show the white cell count is down - the patient's immune system has completely shut down. They move him into a clean room. Foreman tells the parents that a cold will now kill the patient.

They do a bone marrow biopsy on the patient. The patient is worried he will have to stay in a clean room for the rest of his life.

House goes to Cuddy to get excused from clinic duty. Cuddy is making him do it so he will have to deal with people. She threatens to make him more miserable if he tries to keep calling her in for consults.

Wilson asks if House has a thing for Cuddy, but he denies it. Wilson wonders why House isn't kissing up to Cuddy. All of a sudden, House asks Wilson what the patient's first symptom was. Wilson says it was a cough. House goes to think in his office.

House meets with his team. He thinks the patient was given gout medicine - Colchicine - instead of cough medicine - a pharmacy screw up. It explains all the symptoms. However, Cameron points out that he isn't getting better - he got better then got worse. House thinks there may have been another screw up - someone gave him the medicine at the hospital.

House has to admit he was wrong although his theory was perfect. However, he now thinks the cough medicine may have caused the problem. Wilson suggests exploratory surgery, but the patient will likely die if he undergoes surgery. However, House agrees to it as they have no other choice.

They start to prepare the patient for surgery. However, the patient goes into cardiac arrest while they insert a heart catheter. They get his heart started again. However, they have to cancel the surgery. The patient now also has pain in his fingers. Cameron tells House, and he starts thinking of something.

House goes into the clean room without preparation. He still thinks the patient was poisoned by Colchicine because of the new symptom - hair loss. He thinks the kid has been using illegal drugs contaminated with Colchicine and orders treatment. The patient starts improving.

However, House is not satisfied - he still can't figure out the source of the poisoning. The patient and his family start making wedding plans. However, the patient starts coughing again. They give him pill, and he realizes they aren't the same as the pills he took.

House finds the similar pills in the pharmacy too.

The patient brings a mucous sample to House for examination. He insults the patient and guesses that she's getting fired because her glasses and teeth have recently been worked on. He agrees to give her a full body scan while her insurance is still good.

House tells the next patient he kissed Cuddy's ass to get out of an hour of clinic duty. He realizes the patient has something in his anus because he hasn't sat down. The patient says it's an MP3 player. House leaves the patient to Cuddy.

The title of the episode comes from the principle of Occam's razor which, as simplified by the team, suggests that the simplest answer is usually correct. This principle is played with throughout the episode.

As House himself said, pharmacy errors cause thousands of deaths a year, and many more illnesses. However, colchicine poisoning is rather rare.