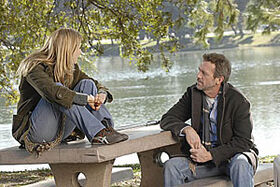 One Day, One Room is a third season episode of House which first aired on January 30, 2007.

House is banished to clinic duty for two days. He gets a run of patients who suspect they have an STD. In frustration, he goes to the waiting room to tell all the people with runny noses to leave because they have a cold. All of a sudden, a patient grabs his head in pain and starts running around the waiting room. House trips him up and injects him with a paralytic. He asks Cuddy to take his case.

The patient is admitted. The team starts a differential. House orders an MRI, a psychiatric workup and a head CT scan with blood panel. Then he tells them to take the cockroach out of the patient's ear. He wants the team to do the tests to get House out of clinic duty.

House takes the opportunity to go to the park. Wilson meets him there and they start discussing why the joggers are out there. House admits he is dodging Cuddy.

Cameron goes to the clinic and finds a homeless patient with terminal cancer. However, Cuddy finds her there and learns House is dodging her. She finds him in the park, using Vicodin. She tells House it's either clinic or jail. When House tells her he prefers jail, she reminds him how much he owes her.

The next clinic patient starts in on House about his appearance. House tells him he has athlete's foot in his nose.

House offers $50 to any patient who will leave the clinic. Cuddy catches him and offers him $10 for every patient he can diagnose without touching them, on the condition he pays $10 for each one he has to touch. She's hoping the experience will teach him some humanity. House makes a point of not touching the patient, including making a patient take his own pulse. However, he regrets it when the next patient is a beautiful woman - it costs him $10.

House gets the results of STD tests. The first two don't have an STD, but House reminds them of the need for safe sex. The third patient has clamydia, and when informed she breaks into tears despite how mild the disease is and strikes out at House when he offers her pills. House immediately figures out she got it by being raped.

A psychiatrist is assigned to the rape patient, but she still wants House. When Cuddy tries to be helpful, the patient is defensive and insists on House. House agrees to see the patient, but tells her he doesn't want to treat her and that he never wanted to in the first place. He tells her she holds no interest for him. She still insists because she trusts him. He tells her he can't be trusted. When he likens the situation to him being raped, she throws him out.

Cameron's cancer patient is refusing palliative care because he has screwed up his life.

House still doesn't want to work with the rape patient. He then sees one of the guys he paid $50 to leave coming back to have a magnet surgically removed. House finds the magnet with a surgical scalpel, and notes that it has passed into his intestines and that it will pass.

The rape patient attempts suicide by grabbing and swallowing sedatives. The psychiatrist says the patient hadn't said a word in the whole hour she talked to her.

The rape patient is admitted, and wakes to find House next to her. She promises him she won't try suicide again. House tells her Cuddy has ordered him to be there. He says he hates hypocrisy, but she points out he doesn't mind cruelty. He tells her to tell someone in authority about the rape. The patient wants to talk, but doesn't know what she wants to talk about. House points out that he's not going to discuss mundane things with a rape patient.

House speaks to his team about the rape patient. He says that he's no good at this, and Chase agrees with him. Cameron is supportive. Foreman tells him to do what the patient wants to do.

House goes back and insists the patient talk about her rape. House reminds her it wasn't her fault. The patient seems to be well adjusted, but still wants to talk about mundane things. The patient thinks time will do her good, but House tells her it's not true.

Cameron still tries to have the cancer patient accept palliative care. The patient knows that Cameron's husband died of cancer. The patient wants to be remembered.

House seeks advice from his team about what to tell the patient. Cameron counsels the truth. Foreman says to tell her his life has sucked. Chase tells him to keep her sedated, but there are no right and wrong answers.

House wakes the patient. He tells her his grandmother abused him by making him sleep in the yard or take a bath in ice whenever he misbehaved. He says he never told his parents out of fear he wouldn't be believed. However, the patient doesn't believe the story because he still had a relationship with his grandmother. House says it doesn't matter if it actually happened to him.

Cuddy comes in with worse news - the rape patient is pregnant. House breaks the news to her, and starts talking about abortion, but the patient is against it in principle. They start arguing about it. The patient notes that he likes to debate, but not talk about personal things.

Cameron's cancer patient is getting worse. He is still refusing pain medication. He thinks Cameron will remember him better if he dies in pain. Cameron agrees not to medicate him, and stays in his room.

House and the rape patient go to the park. They discuss good and evil. They get into another fight about the abortion, and House says that if she doesn't want to discuss it, he can't help her. He figures that she doesn't think that her rapist will be punished except by God.

House's patient asks House if he thinks the rapist feels bad about it. House asks her why she's asking instead of answering her. He asks why she chose him, and she admits it was because she thinks he is hurting too. He admits the story he told was true, but it was his father, not his grandmother. The patient starts opening up to him about the rape and agrees to terminate the pregnancy. Cuddy comes in and tells House how well he did. However, House doesn't know if he did her any good.