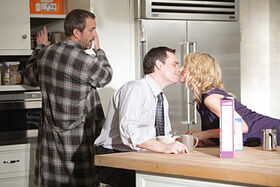 Open and Shut is a sixth season episode of House which first aired on April 27, 2010. The team treat a woman who is in an open marriage, which creates further difficulties for Taub and his wife Rachel when he lets it slip that they should try the same thing. Elsewhere on the relationship front, House redoubles his efforts to break up Wilson and Sam.

A woman is about to have sex with Damien, but her husband drops by to get some paperwork signed for her daughter's school. After her husband apologized for interrupting he leaves. However, the woman starts having intense abdominal pain.

Wilson and Sam are having breakfast and discussing whether Sam can keep clothes at his condo when House interrupts. Wilson and Sam make arrangements to meet again that night. Wilson is impressed that House is being civil to Sam, but wants to know what's on his mind. He points out that Sam put the milk in the wrong place in the refrigerator (the door, not the shelf where it‘s cooler), something that bothers Wilson . He warns him that he didn’t confront Sam about it and won't be able to get over it in the end. Wilson goes to put the milk back in the right place.

The woman has a fever along with the pain, and Thirteen tells them she's in an open marriage. Taub thinks that open marriages are impossible. Chase gets back on the subject and notes that it might just be intestinal blockage. However, Dr. Foreman thinks she might have herpes and that she's only been exposed recently. They decide to do a barium enema and House agrees to do it himself so he can talk to the patient. He and the patient talk about the open marriage, and she says that the only difference between them and most couples is that they're honest about it.

Taub is flirting with one of the physiotherapists when Thirteen comes by and tells him its dangerous because she's interested in him.

The barium enema x-ray was negative, but her intestinal pain disappeared right after the procedure. Thirteen and Taub want to discharge her, but House insists that Taub run a full radiological scan of her digestive tract to make sure.

Sam talks about her day to Wilson, however, he notices she's loading the dishwasher incorrectly.

Taub talks to the patient about her marriage, but when she tires of the subject, he changes to baseball, but she laughs and agrees to talk about it. They realized early in the marriage that they were bored with each other but they thought they could stay together. All of a sudden, she starts to complain her heart is racing. Taub can't get it under control and calls for a crash cart.

Chase is taking a medical history of the husband. He admits he hasn't had any new partners in the last six months. He tells Chase that he's doing it for his wife and he doesn't want her to feel bad. Chase tells House and House thinks the husband has another secret. Since neither of the patient's sexual partners has been outside the country, House decides it might be the husband and tells Chase and Thirteen to do an environmental scan to confirm the husband has not been out the United States.

Thirteen tells Chase that she had a stepmother - the woman who had an affair with him before her mother died. She didn't see it as a big deal. Chase finds proof that the husband wasn't lying about his travels, but Thirteen finds a clue - a loofah sponge.

Taub is having dinner with his wife and after he discusses throwing out their loofah and treating the patient, he talks about the patient's open marriage. His wife wants to know why he brought it up because he usually doesn't talk about the patients. Taub denies that he would want an open marriage, but then admits that he thought Rachel would never agree. Rachel thinks he's cheating again. Taub tells her about Maya, but assures her that he's not having an affair and he denies he wants one. She wants to know if he finds the Maya attractive and he admits he does. She tells him that although she's attracted to other men, she never thinks about doing anything. Taub gets paged - the patient's legs are paralyzed. He insists he has to leave.

They can't find anything causing the paralysis, and there were no signs of parasites. House thinks it is an electrolyte imbalance. Chase gets back on topic - her increased sex drive could be a symptom. House orders a scan of her adrenal glands.

Sam isn't using a coaster, and once again Wilson can't stand it. He also asks her to change the toilet paper, not to put large bowls on the bottom rack of the dishwasher and to throw banana peels in the proper container. However, she denies that she did any of those things and Wilson realizes it was House. However, Sam realizes that he's still upset about the things she did when they were married..

The patient's lover drops by, and Thirteen has to take their daughter out of the room. The husband tells him to leave the room because it interferes with their family time. The patient agrees with her husband. The lover apologizes and leaves.

Sam and Wilson start arguing about laundry and their divorce.

Thirteen tells Taub his cheating is probably a hormone problem. He says with being short and bald, he's not a fan of genetic predisposition. They don't find any problem with the adrenal gland, but Thirteen sees something on the lung.

Sam and Wilson are still arguing about their marriage and the divorce. He tells her she was a selfish bitch.

The spot on the lung was a clot. House admits a clotting disorder would explain all the symptoms. All of a sudden, Cuddy comes in with news that the patient doesn’t have insurance. Thirteen insists she saw the policy, and House says that he's already ordered a number of expensive procedures. However, Cuddy has checked - the policy was cancelled for non-payment.

House goes to see the patient about the insurance. She insists there must be some kind of mistake. However, the husband admits that he fell behind on the payments and has been paying money from the retirement account. He admits he has lost all of their savings and House realizes that was the secret he was hiding.

Thirteen starts the patient on heparin. They try to explain the clotting and House orders tests. Wilson comes in to tell House that Sam has left and House sends Thirteen out of the room. House said he did Wilson a favor by making him stand up to Sam for once, but Wilson asked why he didn't just leave it alone.

Thirteen draws the blood as the patient tells her that she sent her husband home. She tells Thirteen her first relationship was with a man who lied about being single. His wife called them and the patient later felt superior because she was honest with her husband.

Taub comes home and finds Rachel folding laundry. Rachel told him that the sex wasn't what hurt her about the affairs, but the lies. However, she agrees to let him have outside sex every Thursday night as long as he‘s home by midnight and doesn‘t discuss her with his lovers or meet any of them. It's either that, or she would have to leave.

All the blood tests ruled out a clotting disorder. House realizes Taub has permission to cheat - he's wearing cologne and Taub admits he's dating Maya that night. As they discuss diagnoses, their pagers go off. The patient's abdomen is hurting again. Chase calls for an ultrasound machine.

The ultrasound is clean. Chase thinks it might be the parasympathetic nervous system. However, they realize it went away during the barium enema - it's most likely an intestinal interceception - the intestine folding back on itself. It cuts off blood flow and most likely indicates intestinal tumors. They have to do surgery to correct it.

House has bought Cuddy an espresso machine and she can't understand why. He tells Cuddy that by helping Wilson, he felt good so he's doing it again.

Taub and Chase operate on the patient, and Chase asks him if his wife will be cheating too. Chase tells him to be sure he's fine with that. However, they find no tumors, just inflammation. IVD is most likely, but it wouldn't explain the other symptoms. Her kidney function is also failing. However, House thinks the IVD set off ankylosing spondylitis and orders treatment for it.

Taub gets paged and finds his wife in the garage. She says she can't go through with it. He tells her he's been an idiot and that he only needs her. Although he's supposed to be working, he goes home with her.

Chase is listing a large number conditions on the board. The patient is not getting better with treatment and her left kidney has already failed. Taub starts ruling things out, and the rest join in. They narrow it down to the three most likely and start treatment.

Sam drops by Wilson's office and they apologize to each other. Sam admits she was selfish and that Wilson has changed too. He admits that he resented her and that he should have told her. They reconcile and admit not to give House the credit.

The patient starts to get worse. The husband returns, but they have to start dialysis. They start another diagnosis, but House notices the flowers. Thirteen says the husband got them from their garden, and House realizes they are lilacs. Lilacs attract bees. They had ruled out Henoch-Schönlein purpura because there was no respiratory infection to trigger it, but it can be triggered by bee stings as well. Thirteen says it causes a rash as well. They go to look for it. The patient admits she was stung by a bee about a month ago. She denies having a rash, but House finds one in her mouth. She needs immunoglobulin and cyclophosphamide, but she should recover.

House comes home and finds Sam and Wilson back together. House finds the milk in the right place and moves it back to the shelf.

Taub finds Maya in the garage and apologizes for cancelling, but then they start kissing. Taub gets into her car.

Henoch-Schönlein purpura is not terribly rare, but does not reach the severity of the case in this episode in more than one case out of a hundred. It is usually self-limiting and needs only symptomatic control.