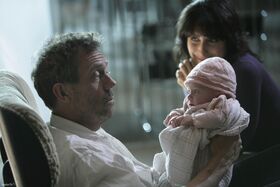 Painless is a fifth season episode of House which aired on January 19, 2009. At Cameron's urging, House and the team take on the case of a man living with such severe chronic pain that he tries to kill himself, unable to go on after living for years without a diagnosis or any relief from his suffering. As they try to determine whether the man's pain is psychosomatic or caused by a physical disease, parallels between the patient and House's experiences with excruciating, prolonged pain become apparent. When the patient again attempts suicide under the team's care, their search for answers becomes urgent. Meanwhile, Foreman and Thirteen explore their now complicated relationship as they work together on the Huntington's disease clinical drug trial, Cuddy finds that taking care of her newly adopted baby leaves her little time to run a hospital and baby-sit House at the same time and Houses bath leaves.

A man tries to commit suicide by inhaling carbon monoxide, but his wife and son come home early and rescue him. He says he just couldn't take the pain any more.

House is having pain problems of his own as he tries to relax in the bathtub.

He meets Cuddy at the hospital entrance when he comes in - she is usually there much earlier and he guesses it's her new baby, but it was her administrative duties instead. House apologizes for not doing his budget, but Cuddy says Cameron did it for him so she would be owed a favor.

Cameron comes to him with patient - he's in chronic pain with no seeming cause. House thinks it is drug seeking behavior, but Cameron points out he had narcotics and didn't even use them to try to commit suicide. Cameron dismisses Thirteen's diagnosis of fibromyalgia and Taub's guess that it is mental illness. None of the patient's previous doctors have found anything wrong with him. House orders a pain assessment to rule out anything psychosomatic, and an environmental scan.

Taub does the assessment. The responses of the patient, wife and children are consistent. Foreman does the environmental scan with Thirteen and find more drugs than House uses. Foreman thinks Thirteen is avoiding him after they kissed. Thirteen makes it clear she doesn't want to drag down Foreman. They find quail and Thirteen thinks it is food poisoning and Taub thinks the profile shows the pain is psychosomatic. House orders a biopsy of the patient's muscles. While Thirteen and Kutner work on it, the patient has great pain in his right arm and goes into cardiac arrest.

The team calls House at home, but he doesn't answer. He calls back and guesses they must be calling about a pulmonary embolism. It shows the pain isn't psychsomatic. House orders them to scan for tumors. He then notices his ceiling is leaking. He dries it with a towel on his cane, but when he pokes it with his cane the ceiling collapses and dumps water on him.

Taub and Kutner do the scan and discuss suicide and their childhoods. Kutner finds something near the diaphragm.

House has a workman come in. The workman says it's the result of negligence and isn't covered by insurance.

Foreman once again tries to talk Thirteen into having a relationship. She points out how unhappy the patient's family is. Kutner and Taub come in with the results which show that there is air near the patient's intestines. Kutner and Thirteen decide to do an angiogram to find the blockages. House comes in to find his team believing they have solved the problem. However, House realizes the patient tried to inject air into a blood vessel to kill himself - the air they found wasn't a symptom. The patient admits he tried to kill himself again.

They put the patient in a hyperbaric chamber to work the air out of his system. Cuddy calls the team over to her house to punish them for letting the patient attempt suicide. Thirteen wants to focus on the abdominal pain, which was the first symptom. Foreman thinks it is a glycogen storage disease. House agrees and orders the test.

Thirteen runs into Janice, who is showing improvement. She finds Janice's appointment was moved.

Taub and Kutner put the patient through tests. Suddenly, the pain shoots through his leg and he drops the tennis ball he was squeezing.

Thirteen confronts Foreman about Janice's appointment, but he didn't know her appointment had been changed, or that she had improved. He denies setting her up.

House asks Taub for the name of a lawyer. House decides he has to inject lidocaine just below his brain stem to separate the patient's brain from his body and figure where the pain is originating. Cuddy refuses due to the risks, but House points out the patient is suicidal. She finally agrees.

Chase starts to anethestize the patient and House shows up. House is having a lot of pain too. They discuss their levels of pain. The patient says House can handle it because he doesn't have to hide it from a family.

Cuddy is dealing with the foster care agency. The place is a mess because her maid is late, but the agency man is impressed anyway. He tells her she's way above most foster moms.

The patient loses most of his pain under anasthetic, but not all of it. A lawyer comes in with a bill for House sending him a threatening e-mail about the insurance problem.

Suddenly, the patient's son falls on the floor in tremendous pain. House thinks he is faking. He finds the patient tried to commit suicide by drinking rubbing alcohol. House orders dialysis. The son distracted everyone so the patient could try suicide again. The son asks the doctors to let his father die.

The team runs out of ideas. Foreman agrees something must explain the pain, but House says what if it's nothing. He thinks it might be opiate induced pain. He orders the drugs discontinued. The team resists, but House tells them to do it anyway.

Wilson arrives with a big stuffed toy duck for Cuddy. She tells him he passed the inspection. She's worried about trying to supervise House while trying to take care of the baby. Wilson tells her her standards are too high and tells her to get more help both at work and at home.

They inject the patient with naloxone, a drug that blocks opiates. The patient pleads with them not to.

Kutner presses Taub and he admits that one of the residents he knew tried to commit suicide, but it was a bigger burden on their families. He thinks the patient was selfish.

House finds out that Foreman actually did move Janice's appointment.

House burns part of his kitchen to get his insurance to pay (based on the lawyer's letter), but the pipes above his kitchen aren't his.

The patient doesn't get better, so they put him back on pain medication. The wife confronts House about not having an answer. She thought House would understand because of his own pain. She wants her husband discharged. House agrees to discharge the patient.

House bribes the handyman to lie to the insurance company about his broken pipes. However, the bribe was bigger than the costs of the repair. As House sees the handyman pack up, scratching at his crotch as he does so, he gets an idea.

Kutner asks if Taub was the one who tried suicide, but he denies it.

Thirteen shows up early for her appointment. She asks Foreman out. He goes to confront a nurse about doing the IV wrong, and she lets it slip Thirteen is on the placebo.

Cuddy goes to Cameron to offer her a temporary administrative position.