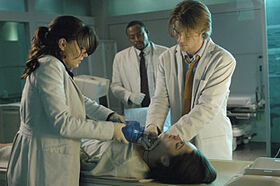 Rebecca: "I just want to die with a little dignity"
House: "There’s no such thing. Our bodies break down, sometimes when we’re ninety, sometimes before we’re even born, but it always happens and there’s never any dignity in it. I don’t care if you can walk, see, wipe your own ass, its always ugly. Always! You can live with dignity, you can’t die with it."
―Pilot

Pilot is a first season episode of House which first aired on November 16, 2004. A young kindergarten teacher is brought to the hospital and diagnosed with inoperable brain cancer by Wilson. However, when she doesn’t improve with treatment, Wilson seeks out House for another opinion. When House fumbles the initial diagnosis, the patient tires of being a guinea pig just as House feels he has found the right answer. Meanwhile, new hire Eric Foreman tries to get used to working with the world’s most difficult diagnostician. Cuddy, frustrated with House’s lack of a work ethic, decides to go to extreme measures to get House back into the habit of working in the clinic.

A school teacher in front of class suddenly begins speaking gibberish and becomes confused. Her panic mounts, and she hastily scribbles the words, "call the nurse" on the whiteboard before collapsing in a Grand Mal seizure.

A month later, Dr. James Wilson introduces the teacher's case to his close friend Dr. Gregory House, a diagnostician. House is worried people will think he's a patient because of his limp. When Wilson suggests he wear a lab coat, House tells him he's afraid people will think he is a doctor. House thinks that the patient has a brain tumor, but Wilson asks him to take the case because she's his cousin. Wilson doesn't think it's cancer because she isn't improving with radiation therapy. Wilson reminds him that House has three overqualified doctors working for him that would love to work on the case.

House meets with his diagnostic team and reminds them that "everybody lies". New hire Eric Foreman wonders why House isn't with the patient, but Allison Cameron tells him that House doesn't like meeting patients. At this point, House has stopped thinking it's a tumor. Robert Chase thinks it is an aneurysm or stroke. Cameron thinks it might be mad cow disease. Foreman thinks it might be an encephalopathy despite a negative blood test. House tells them all to proceed with the appropriate tests.

Lisa Cuddy, the Dean of Medicine, comes looking for House to berate him for not working hard enough, including being six years behind in clinic duty. He says he's going home - he can't be fired because he has tenure and is always at the hospital during his assigned work hours. Cuddy agrees that that he still has a good reputation but it will go to hell if he doesn't do his job.

Cameron and Foreman start to do a test, but it's canceled on Cuddy's orders - she's taken away all of House's hospital privileges, the only thing she has the power to do to House without board approval. An enraged House confronts her but Cuddy is unconcerned with his threats. She tells him to go and do his job. He tells the team to do the MRI, then goes to do clinic duty.

They manage to stabilize the patient and get her conscious. She had an allergic reaction to the dye used in the contrast study.

House tells the team to give the patient high doses of prednisone. He thinks she might have vasculitis even though it is extremely unlikely. They can’t do a biopsy to confirm, and the only way to test her is to give her the drugs and see if she responds. However, the patient realizes they aren't treating her for cancer, and is relieved she might not have a tumor. Chase is upset that they might be misleading the patient into thinking she doesn't have cancer.

Foreman goes to the classroom to do an environmental scan. He finds a parrot and thinks it might be Psittacosis. However, House dismisses it because the none of the kids are sick and it is less likely five year olds would take basic hygiene precautions. House tells him to break into the patient's apartment to do another environmental scan. Foreman is resistant, but House knows that Foreman broke into someone’s house and was arrested when he was sixteen. House found out from one of his teachers. He says that's why he hired Foreman. Foreman reminds House he can't be fired for refusing to break into someone's home.

Cuddy asks House why he is giving the patient steroids. She comes to the conclusion that House is guessing and she wants to stop the treatment. They start to argue about who is in charge. She reminds House he has no evidence that the patient has vasculitis. He asks her why she's so afraid of making mistakes. Cuddy goes to see the patient and stop the steroids, but when she arrives she finds that the patient has improved greatly and has an appetite. Cuddy realizes she may have been wrong.

Wilson examines the patient, who really wants to meet Dr. House. She asks if he's a good man. Wilson says House is a good doctor. He does admit that House is his friend, and that House may even care about him. All of a sudden, the patient complains that she can't see, then has a seizure. Her heart rate skyrockets and she goes into cardiac arrest.

They defibrillate the patient and test her for brain damage by having her arrange pictures to form the elements of a story, but she can't manage it. However, she passes the test five minutes later. They realize that although her sight has returned, her brain is dying. House tells them to stop all treatment because each of the possible diagnoses has a different time line. It isn't a tumor and the steroids helped, but they don't know why. House admits he is stumped. Foreman decides to follow House's orders to break into the patient's house and asks Cameron to come along because the police are usually easier to deal with when a pretty white girl is around.

They report to House that they couldn't find anything to explain her symptoms, but Foreman reports that she isn't Wilson's cousin - she had ham and Wilson is Jewish. Wilson bluffs, but then gets the patient's name wrong. House calls Foreman an idiot - House has realized that Rebecca may have Neurocysticercosis - a tapeworm from eating pork, something that would never have occurred to him if he still believed the patient was Jewish. That would explain why she reacted well to the steroids initially, but then got worse. Tapeworms usually stay in the digestive system, but the eggs can pass into the bloodstream and then anywhere, including into the brain. If the tapeworm is healthy, the immune system (and patient) never even detect it. However, when the tapeworm dies, it stirs up the immune system and causes swelling in the area, in this case Rebecca‘s brain. However, the test for parasites was negative, although it is a false negative in about 30% of cases where the parasite is present. There is no other way to test for it except by trying to treat it. However, the patient is tired of being treated and wants to go home and die.

House goes to see the patient and calls her an idiot for refusing treatment. She reminds him that his previous diagnosis was wrong. She asks why he's crippled and he explains that he had an infarction in his thigh and they didn't figure out what was wrong until it was too late to treat it. She thinks he avoids patients because he doesn't want people to see him crippled. He tells her there is no way to die with dignity - everyone dies and it's always ugly. You can only live with dignity.

However, the patient still refuses treatment. The team wants House to claim she's mentally incompetent but he won't do it. He's solved the case and he feels the work is done. The patient wanted proof, but House can't do that. Chase says there might be a way to prove it to her - do an x-ray in her leg where there is likely to be a worm. Although they have the same density as cerebro-spinal fluid, they don‘t have the same density as muscle. House enthusiastically agrees. They do the x-ray and find a worm larva. She agrees to the drug to treat it and is surprised that it only takes two pills a day for a month. There are side effects, but they are manageable.

Cameron asks House why he hired her. He asks her why she thought he did it. He says he hired Foreman because of his criminal record, Chase because his dad called, and Cameron because she was extremely pretty. When she is shocked, he says he did it because she worked hard despite the fact she didn't have to. Gorgeous women usually opt for an easy life and they don't go to med school to work really hard unless they are damaged. At that moment, Cameron's pager goes off.

They manage to bring the patient's class in to visit her despite the rule about "family only".

House asks Wilson why he lied about the patient being his cousin. He says it got House to take the case. They talk about lying while watching a medical drama.

House is finally forced to go to the clinic for the first time in nearly six years. Cuddy gives him an interesting case - a patient with bright orange skin. He tells the patient his wife is having an affair because she hasn't noticed the color change and that it was caused by the fact he's been eating too many carrots and taking too much niacin. This patient asks to have House fired for making him think his wife was having an affair, but Cuddy won't do it because he's the best doctor they have. We see that the patient is no longer wearing his wedding ring.

The next patient is a 10 year old boy with asthma. The mother is not giving him his steroids because she‘s worried about the side effects. House reminds the mother her last doctor weighed no drugs against no oxygen. He suddenly realizes something and goes back to his patient, but tells the mother if she doesn't trust steroids, she shouldn't trust doctors.

The next patient thinks he has chronic fatigue syndrome or fibromyalgia. House thinks he is just getting older. House goes to buy some mints and puts them in a Vicodin bottle, which he then gives to the patient. House keeps the Vicodin for himself. However, the patient later comes back for a refill.

Neurocysticercosis is the most common parasitic neurological disease in the world. It is very common in the developing world, but is somewhat rarer in New Jersey. In a patient with no history of foreign travel, it is very rare.

Other trivia and cultural references[]