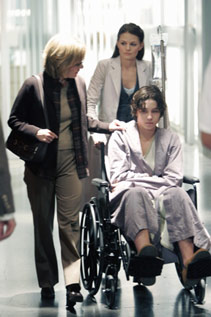 This article is about the episode. For information about poisons, see Toxin

Poison is a first season episode of House which first aired on January 25, 2005. House tries to blow off a case of a sick teenager, but when the obvious explanations are ruled out he gets interested. He soon figures out the correct diagnosis, but when the patient takes a turn for the worse, pinning down the exact cause of the patient’s illness soon becomes vital. Just when House figures he’s got it right, another patient shows up who seems to have no connection to the original patient. When House thinks he’s found the right answer, he finds that the patient’s mother has lost all faith in him and won’t allow treatment.

A high school student gets nausea, abdominal pain, and dizziness and then collapses during a calculus exam.

The patient is taken to Princeton-Plainsboro. Foreman convinces House to take the case by saying he has ruled out all the obvious diagnoses. The team starts a differential based on the patient's negative tox screen. Chase talks to the patient, but his mother is there interfering with the questioning - she denies her son takes drugs. She admits that she has tested his hair for drugs. She denies he has ever had a similar problem. At that moment, the patient has a seizure.

Cameron and Foreman search the patient's home for drugs. Foreman thinks House is doing it because House thinks everyone is an addict. However, they do find spoiled tomato sauce.

They report back to House, who brushes off the diagnosis of botulism because of the seizure. House thinks it is organophosphate poisoning.

They treat the patient for the poisoning, but he doesn't improve. The patient's mother is getting more and more frustrated. Foreman suggests a targeted approach and House agrees. Foreman also suggests trying to find the source of the poison. Chase performs a procedure to directly stimulate the patient's heart rate.

Cameron goes back to the patient's home looking for pesticides. She finds an empty can of disulfoton, an insecticide, but the mother says it was empty and contained orange peel oil, but Chase insists they are right. The mother refuses treatment.

House thinks they should get a court order, but Cuddy realizes they will never get it because the only symptom is that the mother disagrees with House. She suggests House get a waiver from the mother saying she's refusing treatment. House confronts the mother with the waiver and asks her to sign it. Instead, the mother agrees to treatment. However, before they can start, a second patient with the same symptoms appears in the emergency room. The new patient lives 10 miles from the first patient and they don't know each other.

The second patient's mother and father say there are no pesticides in their home. The first patient's mother wants Chase off the case because he said he used drugs in high school. The team starts working on commonalities between the two patients. He finds out that they take the same bus to school.

Cameron and Chase go to the bus to search it. Meanwhile, the first patient's mother has lost confidence in House for trying to give her son the wrong medicine. When Foreman defends him, she turns on him too. The bus driver says that he did see a pesticide spraying truck on the route.

The first patient's mother gets in touch with the CDC and won't let the team treat her son until they get back to her. Cameron tries to talk to the mother, but she won't listen. Cameron confronts her, and the mother agrees to treatment. They start treating both patients, but neither improves. Instead, they both start having seizures. They manage to stabilize both patients.

The patients' hearts, lungs and livers are all in distress. They figure due to the heart problems, they absorbed the poisons through the skin before they got on the bus. They concentrate on what they did first thing in the morning. They go to both patient's houses for anything they could both have used. Cameron and Foreman find they use the same laundry detergent. However, the second patient's parents deny that their child ever did the laundry, and that the clothes he was wearing were brand new. House goes to look at the first patient's clothes - they look old, but they are in fact new (the label isn't faded). House orders them tested. They find phostron. The second patient's parents agree to treatment, but the mother of the first patient won't.

House goes to see the mother, and waits until she agrees. She still wants to wait for the CDC, but House says there is no time. She gets a call from the CDC, and they say they can't give her an opinion until the following week. She agrees to the treatment. However, the phone call was placed by Chase, who was putting on a Southern accent.

Both patients improve and regain consciousness. The mother learns about the deception, but doesn't mind - she tells her son they're the arrogant jerks who saved his life. They trace the poison to stolen clothes that were stored in a truck that held the pesticide.

A man brings in his elderly mother, Georgia, saying that she's been in too good a mood recently. She admits she's been having fantasies about younger men, like Ashton Kutcher. She then starts flirting with House. He orders tests and tells the son that because of the sudden personality change, it is probably serious and not just the result of advancing age.

Georgia starts writing love poetry about House and Wilson finds it; he proceeds to read it aloud for House and other staff to hear. Her test results show she has syphilis despite not having had sex for over a decade. She admits she was diagnosed back in 1939 when she was a teenager before it was treated with penicillin. Her son is shocked. It was dormant and has recently started attacking her brain, causing her personality change. House prescribes penicillin.

She later returns to the hospital to see House. She tells him she doesn't want to be treated because the brain damage makes her feel so good. He tells her that the damage to her cerebral cortex is permanent - she is "doomed to feel good for the rest of (her) life." She promises to come see him for a checkup once she's no longer contagious.

Organophosphate poisoning is one of the most common causes of accidental poisoning. In fact, Hosue came to the right diagnosis almost immediately. However, it is somewhat rarer in urban dwellers as pesticides are usually used in quantity in rural areas.