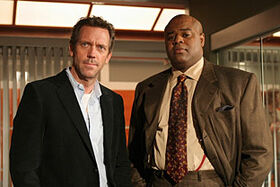 "You asked me why I like you. You’re abrasive and rude, but I figured everything you do you do it to help people. But I was wrong. You do it because it’s right"
―Cameron

Role Model is a first season episode of House which first aired on April 12, 2005. When a politician friend of Vogler’s collapses at a rally, he demands House at least examine the man. House soon takes an interest in the case, but his conclusions seem to end any chance the patient has of pursuing his political career. In addition, Vogler’s demands on House increase to the point where he wants House to shill for his new pharmaceutical.

A politician is giving a speech. All of a sudden, he starts feeling unwell, struggles through the rest of his speech, which his assistant finishes, and then says he is okay. However, he continues to become disoriented and collapses down a short flight of stairs.

Foreman is examining the politician, who says he has been run down. House comes in playing his GameBoy and lets the politician know he isn't interested in his case until he notices the patient's patelar reflex isn't responding at all. He orders an MRI and a lumbar puncture. However, the tests are negative except for a small smudge in his brain on the MRI. House is wondering why Chase isn't scared of him anymore, and House tells the others he doesn't have to fire anyone. House feels the patient has either an infection or tumor and they have to do brain biopsy.

Foreman explains the diagnosis to the patient, but tells him that his immune system had to be compromised, but that he must have AIDS. He denies the behaviors that would give him AIDS, but House is pushing anti-virals on him. He refuses medication. The patient only wants drugs for the toxoplasmosis, but only agrees to an AIDS test if it is done anonymously. He also demands they also test him for anything else that could cause the toxoplasmosis infection.

Cameron and Chase are shocked that House is giving a speech for Vogler. He tells them that agreed to it to keep all of them. He tells them to tell the press the patient has cancer and start tests for it despite the AIDS diagnosis.

The patient starts complaining of a headache, but wonders why Foreman won't believe he might not have AIDS. The patient thinks that politicians don't get the benefit of the doubt.

The AIDS test comes back positive. The patient is started on anti-virals. His T-Cell count is low, which means it is likely he will die. They also need to contact the patient’s sexual partners. He says he has only had two girlfriends. House still thinks he has had homosexual sex and wonders why he is continuing to lie about it. The patient wonders why House always believes the worst about people. The patient prefers to think people are good and be disappointed every once in a while. House takes another blood test.

The patient tries to get out of bed, but finds he cannot walk. It is clear the anti-virals are not working and he is getting worse. Cuddy asks House what he will do and why he is being so upset about having to give a speech for Vogler when the drug works.

House tells the patient the anti-retroviral aren’t working because he doesn't have AIDS - it was a false positive. A second test was negative, but the patient is still dying - they just don't know why.

The patient's right side is losing sensation and he is losing brain function. House calls Wilson into help. House orders a full body scan because it's the only alternative, although it usually doesn't help. Wilson asks why House tested the patient twice and feels that House must have believed the patient - something House never does.

They find some things in his scan, but everything he finds is explained. Vogler comes in to lord it over House about thinking it was food poisoning. He has 14 pages of notes for House's speech.

House talks to Chase about ratting him out to Cuddy and Vogler. He admits it. House wonders how he can work with him. Chase tells him he has no choice.

Foreman starts to test the anomalies they found. The patient wonders if he is going to be okay.

House tells Wilson he is selling his soul to Vogler by giving the speech. The only difference in the new drug is that they added an antacid. Wilson tells him not to worry about it - he’s doing a good thing.

Foreman tells him all the anomalies were routine. House wants to biopsy the patient's spleen despite the risk of him bleeding to death because that was the only area that showed anything. Cuddy is opposed, but agrees.

House finds Cameron in the lab. He says he knows she likes him and wants to know why so that he knows what makes her tick. She thinks it is because of him trying to save her job by giving the speech.

Foreman goes to the patient to seek consent for the spleen biopsy. However, the patient is having trouble breathing. Foreman realizes they can't do the biopsy with him in this condition.

Foreman reports the patient is in bad shape. They think it might be hairy cell leukemia, but there is no way to test for it. However, they test for other markers and they aren't present. The patient is positive for Epstein-Barr virus, but that doesn't indicate hairy cell leukemia. However, it does point to something else. House rushes to the patient's room and realizes he didn't damage his tongue in an accident, he had an epileptic seizure. The patient admits the epilepsy, but denies being on medication for seizures since he was ten. House takes away his oxygen until he admits to taking a drug that with the Epstein-Barr virus causes an autoimmune disease - common variable immunodeficiency disease. Chase points out he guessed the patient had that condition earlier - House rejected it based on the fact it is generally a childhood disease. However, the patient got the disease as a child, but it didn't manifest itself until he was under the stress of campaigning. He orders them to treat him for it despite how unlikely it might be. Over the next week, the patient starts improving. He only needs to take medication for the rest of his life. They tell him he can continue to run for office. He admits that he won't win, but says that House is wrong about always having to win.

House goes to give his speech, with Vogler depending on House's reputation and integrity to sway the audience. He starts on script, but ends after one paragraph. When Vogler threatens his fellows unless he completes his speech, he goes back to the podium and just tells the audience that the new drug is good because is just the old good drug, only a lot more expensive and under a new patent. He also says that Vogler's company merely fools around with existing drugs to make them slightly different so they will get a new patent. Cuddy and Wilson are mortified. Vogler is stunned. House leaves the stage.

Cameron goes to see House. She agrees to resign so he won't have to fire her or Foreman. House asks why and she says it is to protect herself. She admits she likes him despite his faults because she thought he liked to help people, but she has now realized that he does what he does because he always wants to do the right thing. She thinks that the only way she can do the right thing is to quit.

House thinks a patient has had a miscarriage, but she denies having had sex in a year, since she split up with her husband. He tells her to start her own religion.

The patient comes in with a bruise on her neck, but House thinks it is a hickey. He thinks she is having sex without knowing it - he takes a sample to test for GHB - the date rape drug.

House tells the patient she is lying - her blood tests were all negative. She complains she has a rash on her posterior but House identifies it as a rug burn. House finds out that the patient wakes up exhausted and that her ex-husband lives downstairs. He figures she was sleepwalking.

House sends her to the sleep lab and confirms the diagnosis. She is having sex in her sleep - sexsomnia.

…and perhaps the worst prediction in the history of television[]

"…you’re not going to be president either way. They don’t call it “The White House” for nothing."
―House

"Someday, there will be a black president."
―House