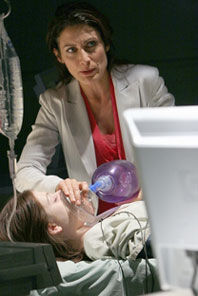 Safe is the 16th episode of the second season of House. It first aired on April 4, 2006. Melinda, an immunocompromised girl goes into anaphylactic shock in a clean room. Meanwhile,the relationship between House and Wilson becomes increasingly strained as Wilson continues to live with House after separating from his wife.

During a visit from her boyfriend, an immunocompromised girl goes into anaphylactic shock despite the precautions they have taken to turn her bedroom into a clean room. Her mother manages to treat her with an EpiPen.

Wilson comes to tell House about the case. They get into an argument about who was supposed to wash the dishes. House is intrigued when he finds out the girl suffered from an allergic reaction in a clean room.

Cuddy briefs the team. They have tested the patient and her environment for four days without finding anything. House thinks someone is lying and asks his team to re-do the environmental scan. Meanwhile, the patient is showing anger about the fact that her parents won't let her out of her bedroom.

The mother and Foreman get into a confrontation about how protective the mother is. The mother says that she is overprotective because her daughter has had three life-threatening illnesses including a recent heart transplant - the result of an accident after suffering an allergic reaction.

Chase and Cameron review the patient's bedroom and realize that the boyfriend could have snuck in. They confront the boyfriend who admits to sneaking in and having sex with the patient. The patient turns out not to be allergic to her boyfriend's semen after they test it. House wants to check if he brought any other allergens in at the same time. The boyfriend admits to taking unprescribed antibiotics, and House points out that his semen can pass on penicillin, which the patient is allergic to.

They decide that the penicillin reaction would explain the reaction, and they decide to release the patient. Just as they are about to, she has a heart attack due to congestive heart failure.

However, the team can't think of any condition that would cause both anaphylactic shock and heart failure. They decide to concentrate on the heart failure.

Foreman and Cameron discuss teenagers having sex during the patient's MRI. The MRI doesn't show any problems. The patient gets into a discussion with Foreman about how long she is likely to live with her transplanted heart. Although Foreman is optimistic, the patient knows she is unlikely to make it more than 10 years.

They perform a heart biopsy to determine if her heart is suffering from tissue rejection. Meanwhile, Wilson has to wait outside of House's home because House has put out a signal showing he is in there with a woman. However, when he finally goes in, he finds out House just wanted privacy to work on the case. They get into another argument.

The biopsy shows negative for rejection, and the blood tests don't show an infection. While Foreman discusses the situation with the parents, they discover the patient has run away. Foreman figures out she is heading for the roof and finds her in a stairwell. The patient starts talking about her problems with her mom being overprotective. Foreman notices that her left leg appears to be partly paralyzed, and it is ascending quickly.

The new symptom doesn't add up either. The only possible disease that causes all three symptoms is tick paralysis, but there is no sign of a tick. They decide to concentrate on the paralysis. However, none of the tests are positive and the paralysis is getting worse. The best explanation they can come up with is Guillain-Barre syndrome so they start treating her for it in the hope she will improve.

Wilson confronts House about erasing Wilson's messages about his new apartment. House admits to it and tells Wilson if he wants to confront him about not doing chores he should be more proactive. House accuses Wilson of avoiding the fact he has to divorce his wife because if Wilson finds his own apartment, he will have to admit his marriage is over.

Meanwhile, the patient is getting worse and the mother feels that she has become resigned to dying. Her usual personality is to be combative. The patient has another attack, this time because the paralysis has reached her lungs.

The patient is put on a respirator. The speed of the paralysis rules out Guillain-Barre, which moves far more slowly. The patient's parents lose confidence in House and turn to Cuddy to supervise the treatment. The team once again tries to determine a possible diagnosis. They decide on botulism as a possibility despite the fact the paralysis is going the wrong way (paralysis from botulism doesn't ascend, it descends). House finds Cuddy and Wilson examining the patient. House examines the patient, but the only revelation is that the boyfriend wasn't using penicillin but another antibiotic. This rules out an allergic reaction. However, the boyfriend did come through high grass so House starts looking for a tick, but can't find one before the patient goes into shock again.

House is convinced that it is a tick and if they don't find it quickly, then she will die as the tick will just keep pumping toxins into her body until they remove it. However, Cuddy overrules House and decides on a course of drugs and intensive care. They get ready to move the patient to the intensive care unit.

House and Foreman intercept the patient in the elevator and House pushes the emergency stop button and starts looking for the tick again. The patient is still in distress as House and Foreman argue about House's actions. Foreman finally decides to let House look and gives him three minutes. Meanwhile, the patient's heart rate starts dropping while House and Foreman frantically look for the tick. However, despite a thorough search, the patient heartrate becomes critically low. Finally, House asks the patient if it was the first time she had sex. He surmises that she wouldn't be used to sensations in her groin and decides to examine her vagina. The elevator doors open as the father sees House looking at the daughter's pelvis underneath a modesty screen. As the father goes to attack House, House triumphantly comes up with the tick.

House is pleased with himself, and thanks Wilson for suggesting that they move the patient, which allowed House to isolate the patient in the elevator. Wilson denies that this was his intention. At that moment, House's cane breaks, and he sprawls on the floor. Wilson notes in passing that it looks like someone cut partway through the cane.

After the patient recovers, her parents agree to let her out of her clean room and go back to school.

Tick paralysis is not terribly uncommon. There are dozens of cases a year, and the disease can appear anywhere where ticks are found, particularly in warmer months. Suburban New Jersey is a great habitat for ticks. The only unusual factor here was it usually only leaps to mind if the patient is frequently in wooded areas where ticks reside. Any insect borne disease is rare in a homebound individual. However, House was right that the tick can attach to any part of the body.

Apparently, guest star Michelle Trachtenberg developed a crush on Hugh Laurie during filming. At the time of the climactic scene where House looks at the patient's pelvis, Trachtenberg had put a note saying "I Love You" under the modesty sheet .