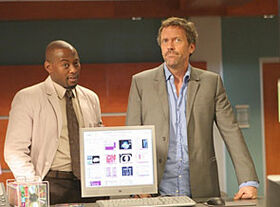 Sex Kills is a second season episode of House which first aired on March 7, 2006. House quickly diagnoses a life threatening illness, but it won't do the patient much good unless he can figure out what was causing an illness in an accident victim whose heart the living patient needs for a transplant. Meanwhile, House suspects Wilson of cheating on his wife.

While playing bridge and talking to his daughter, a 65 year old man (Hesseman) suffers an absence seizure.

The man is taken to Princeton-Plainsboro where he is examined by Foreman. He suffers from acid reflux and headaches, but is otherwise healthy. He also has a swollen testicle.

They do a differential, but House doesn't think it is testicular cancer, because the team has probably already ruled it out. House thinks he has a brain infection caused by an STD even though his tests are negative. The only other explanation is lymphoma, which is terminal.

Foreman confronts the patient about when he last had sex. He claims he hasn't had sex since his divorce a year ago. House still thinks it is an STD, and points out that the patient's daughter was in the room. House goes to the patient, and admits that he had sex with his ex-wife recently and he didn't want his daughter to know. House gives him the STD medicines. The patient admits that he has an STD to his daughter. However, at that point, the patient starts vomiting blood. House orders him sedated. He admits to the daughter that an STD wouldn't cause that symptom.

The team starts a new differential once they find out the patient's heart is damaged. House asks the patient what cheese he ate at a cheese tasting. He determines that the patient ate unpasteurized sheep cheese and got a brucellosis infection. Normal stomach acid would kill the brucellosis, but the patient was on antacids for his acid reflux. The bacteria multiplied and attacked his heart, brain and testicle.

House knows that if they didn't catch the infection in time, the patient will soon go into cardiac arrest. Unfortunately, this turns out to be the case.

House accuses Wilson of having an affair because he is buying chocolates and staying late at the hospital.

The patient requires a heart transplant, but is otherwise healthy. House argues he is a prime candidate, but the hospital's transplant committee refuses on the grounds that he is too old. House calls one of them a racist due to the fact that african americans don't live as long. But nothing changes. Foreman breaks the news to the family - the patient will be dead in a week.

Despite the committee's disagreement with him, House has to admit that he was merely acting as the patient's advocate and agrees with the committee's decision. He then goes looking for a new heart that won't be suitable for transplant to anyone else. He finds a 40 year old overweight accident victim. However, the patient had a fever and stomachache. When the woman dies, House tells the grieving husband he needs her heart.

However, Foreman points out the woman's history shows she had hepatitis C. A diseased heart would kill the patient. However, House does not agree with the diagnosis. House and Cuddy argue with the patient's husband about whether to take her off life support. However, the patient's daughter meets the husband, and he agrees to let House try, but first, in order to release his anger, he knees House in the groin.

However, it's clear the woman had an infection. The team has to do a differential on a dead patient. They do an MRI on the dead woman. House refuses to believe it's hepatitis C because that would mean the other patient would die. He orders a massive dose of medicine on the theory it can't hurt.

House once again accuses Wilson of having an affair, and he warns him not to tell his wife about it. Wilson intimates he has something he wants to talk about privately. House says that if he is the person Wilson wants to talk to, he's made a poor choice.

The treatment of the dead woman doesn't go well. If the team is right, the medicine they would need to treat her disease would destroy her heart. However, the husband now doesn't want the team to give up.

The team continues with the differential. They guess it might be a toxin. House does an environmental scan of the house. He only finds that the woman dyed her hair and took diet pills.

The patient's heart becomes so weak it can't pump blood to the brain. Cameron comes back from the woman's workplace. House starts to suspect infidelity and gonorrhea. They test the patient and start treating her. She tests positive. However, she's not getting well enough fast enough for the patient, who will die before the gonorrhea is gone. They decide to proceed with the transplant and treat the disease in the patient.

House lies to the patient's husband about what was wrong with her. However, he realizes he has to tell him soon so he can be treated for gonorrhea before he gives it to someone else.

The patient survives the transplant. The husband admits that he had cheated on his late wife and probably gave her gonorrhea. He didn't want to believe he gave it to her because it probably caused the accident. He also realizes he should have told House about it.

The patient awakes and finds his daughter and ex-wife by his side.

Wilson shows up at House's home. He has not been cheating; his wife has just admitted she was. They have separated and he asks to stay with him for a few days.

The patient ask for depo-provera. House points out that this will chemically castrate him, but the patient knows this. The patient claims it is to deal with his sexual attraction to cows. House figures that the patient is there on a fraternity prank and writes him a prescription for something similar but harmless.

The patient returns claiming he has been kicked by a cow. He still can't convince House he is really in love with a cow. To dissuade the patient, House tells him he would need painful tests. Surprisingly the patient agrees.

However, the test results show the patient eats beef. House is clearly not convinced he loves cows. The patient finally admits his hot new stepmother is coming onto him. House finally agrees to prescribe the depo-provera.