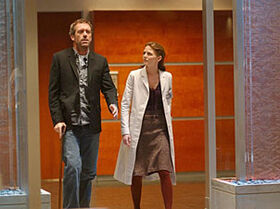 Skin Deep is a second season episode of House which first aired on February 20, 2006. This was in the middle of season 2. A model with a heroin addiction collapses of the catwalk. Meanwhile, Houses leg pain severely increases because he misses Stacy.

A 15-year-old model takes Valium, then collapses on the runway after striking out at another model.

House is suffering more leg pain than usual, but is more than happy to take on the case of the "teenage supermodel". He actually goes to meet the patient. House diagnoses cataplexy, which he feels is drug related. He orders blood and urine tests for a tox screen.

Cameron confronts House about his attraction to the girl. The tox screen shows she has been taking heroin. House keeps going on about the patient's looks. They decide on a rapid detox procedure because they feel the drugs are masking another disease. They explain the risks to her father, who agrees to the procedure. They put the patient into an induced coma. She later goes into cardiac arrest, but they revive her. They explain to the father that if they bring her out of the coma she will be in extreme pain.

The patient comes out of the coma, but shows signs of short term memory loss, which might be the result of brain damage from her cardiac arrest. However, House says she only flatlined for 30 seconds and her brain is fine. He diagnosis post-traumatic stress disorder as the result of sexual abuse from her father. House confronts the father and, on the pretext of being bound by doctor/patient confidentiality and the fact he needs to know about her psychological condition, gets him to admit he had sex with his daughter once.

Meanwhile, the team does an MRI of the patient. They find elevated proteins, which indicates it is not stress disorder.

The revelation of the sexual abuse leads Cameron to want to report it to social services. House claims doctor/patient confidentiality but Cameron says it doesn't apply in abuse cases. When Cameron presses the matter, House tears into her, noting he needs to keep the father around in the event he needs more information about his very sick patient. He orders a brain biopsy.

Cameron goes to Cuddy about the abuse. Meanwhile, Wilson does an MRI of House's leg to see if there is a problem. Wilson takes the opportunity to play god with the microphone. Cuddy goes to House in the MRI to tell him to cooperate with the abuse investigation. The team discusses the ethics of the disclosure, and Chase points out that without the promise of confidentiality, the father never would have admitted to the abuse. Wilson diagnoses that House's worsening leg pain is psychological because he misses Stacy.

Meanwhile, House is resigned about Cameron's disclosure to Cuddy. House comes up with a new diagnosis - paraneoplastic syndrome. To check it, they give her a drug that immediately stops the twitching from which she is suffering, confirming the cancer.

Meanwhile, House asks Cuddy for a shot of morphine in his spine. He doesn't want his team to know he is suffering, and Wilson thinks it is psychological. Cuddy agrees to give him the shot after he shows his atrophied thigh muscle.

However, they can't find any tumor. House is unconvinced by the test results because the other symptoms fit. However, Wilson has checked everywhere. Despite that, the team agrees with House. The only explanation is that the patient is responding unconsciously to the anti-twitching medication. They try a placebo to see if the twitching returns.

The social worker visits the patient, and dismisses the abuse allegations as both the father and daughter deny it. Cameron confronts the patient, who admits that she regularly sleeps with men who can further her career, and she slept with her father because once she did it he would let her do whatever she wanted to do. She then confronts Cameron by asking her if she ever tried to sleep with her boss or other authority figure. The twitching returns, showing the patient is actually ill.

House goes to Cameron and shows her that the patient's medical history shows she has never menstruated and has undersized ovaries. They do an MRI and find the cancer in her groin. House goes to the patient and explains that "he has cancer, on his left testicle". She has male pseudohermaphroditism. She is a genetic male who could not process the testosterone from her testicles. This led to the patient only processing estrogen, so the patient developed heightened female characteristics such as clear skin and large breasts. The surgery to remove the cancer is successful.

House goes to Cuddy for another shot of morphine. Cuddy admits the previous shot was saline solution - a placebo. The pain only returned after House solved the case, so it was psychological after all.

The male patient is exhibiting a number of symptoms. House diagnoses sympathetic pregnancy - the symptoms mirror those of his pregnant wife. He tells the patient to stop whining about it.

Later, House dodges his clinic duty by saying his leg hurts too much. While Cuddy covers for him, she meets the patient again, who is now growing breasts. Cuddy gives the patient House's personal pager number when she notes House did not write down his prior diagnosis on the patient's chart.

Later, the wife comes in in labor, and the husband feels sympathetic pain. However, this leads House to realize that secondary sexual characteristics are based on hormones, such as the estrogen that is coursing through the clinic patient's body. He investigates the possibility that the other patient is unable to process testosterone.