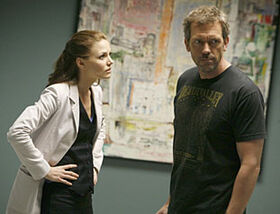 Sleeping Dogs Lie is the eighteenth episode in the second season of House. It was first aired on April 18, 2006. A lesbian women with a life threatening case of insomnia comes to the hospital after swallowing a whole bottle of sleeping pills. They soon learn that she is planning on leaving her girlfriend Max and when her liver fails, Max offers to donate hers and they are faced with an ethical dilemma. Meanwhile, Cameron accuses Foreman of plagerism because they both wrote an article about the same patient.

A woman who has not slept in ten days takes a whole bottle of sleeping pills and her lesbian partner calls an ambulance. She is taken to Princeton-Plainsboro.

Meanwhile, House is taking the opportunity to catch a nap while on clinic duty. Cuddy comes to him with the patient's case, but House thinks its a psychiatric problem and explains the insomnia as a lie. However, House is intrigued that the patient took sleeping pills and still couldn't sleep.

He finds Foreman and Cameron arguing about Foreman stealing an article from Cameron (about the case in Autopsy). While discussing the case, House admits he signed Foreman's article, but didn't read it.

Foreman and Cameron go to examine the patient's optical pressure, and notice that she is sleeping for very short periods. Since the tests aren't showing why she's ill, House orders that they keep her awake to put her under stress and make her sicker. The patient doesn't realize when she's asleep. Suddenly, the patient starts having rectal bleeding.

They do a colonoscopy on the patient without an anasthetic in order to keep her awake and test for a tumor in her colon. The patient goes into respiratory arrest and starts bleeding from her nose.

Cameron confronts House about allowing Foreman to scoop her on the article. House tells her that Foreman just did what was best for him.

Chase starts a biopsy of the patient's nasal tissues. All of a sudden, the patients eyes go into rapid-eye-movement, such as occurs during sleep, even though her eyes were open and she was sitting up. House thinks it is a movement disorder. Chase suggests rabies, but there doesn't seem to be any exposure source. They did have a dog for a week, and House realizes the patient wants to leave her girlfriend because having the dog would indicate a long term relationship. The patient obviously lied about being allergic to the dog, because the drugs for her poison ivy would have taken care of the allergies as well. House agrees to an allergy scratch test.

During the test, the patient admits that she wants to break up with her girlfriend. Cameron then notices the patient has a large contusion. They concentrate on the sleep disorder and the internal bleeding. Foreman comes in and tells them her liver is failing. She needs a transplant, but she can't get one without a diagnosis of what made her liver fail. House realizes the girlfriend could donate her liver (they are the same blood type), but the team is opposed based on the fact the patient wants to break up the relationship.

House tells the patient her liver is failing. The girlfriend agrees to donate a part of hers. However, this will only give them an extra 36 hours. Allergies have been ruled out. House orders as many relevant tests as possible, and warns Cameron not to tell the girlfriend.

However, House goes to Cuddy to tell them the patient and girlfriend have differing interests. Cuddy agrees not to press House about what the interests are, and agrees to advise the girlfriend about the risks of the procedure. Cuddy does so, and the girlfriend still wants to proceed.

Cameron proceeds with the testing, and asks the patient how she can proceed with the transplant without telling her girlfriend how she feels. The patient says she doesn't want to die.

Wilson comes to House over Foreman's article. Wilson tells him that he has to deal with these problems, or else his team will be at each other's throats. However, House tells Wilson that Foreman would have done it anyway.

The transplant is ready to go ahead, but the tests are all turning out negative. House realizes Cameron is alone with the patient and the girlfriend. Just before the patient is about to confess to the girlfriend, House anesthetizes her.

The transplant proceeds. Cuddy asks Cameron what the secret is. Cameron changes the subject and tells Cuddy about Foreman stealing her article. Cuddy tells her to write another article, and wait to get back at Foreman when he needs a reference. The girlfriend goes into cardiac arrest, but is revived. House finds Cuddy and Cameron together and tells Cameron to get back to the patient's case.

After the successful transplant, the team goes back to the differential. House realizes they have to stop the patient'ss immunosuppressive drugs in order to do a proper drug work up. Her white blood cell count turns out to be normal, when it should be low. They realize it's an infection, which is raising the white blood cell count. House thinks it might be something exotic, but the patient hasn't been out of the country. However, House realizes their dog had been out of the country. He looks at the patient's armpits, which show newly formed buboes, a sign of bubonic plague. She caught it off fleas from the dog, which had been to the Southwest U.S., where it is endemic among prairie dogs. He orders broad spectrum antibiotics.

Cameron tells the girlfriend the diagnosis. The girlfriend knew all along that the patient was going to leave her. She gave up her liver to keep her girlfriend from leaving.

Cameron seeks to reconcile with Foreman about the article. However, Foreman is not magnanimous, and claims that they are only colleagues, not friends, and he refuses to apologize.

The title of this episode comes from the old saying "Let sleeping dogs lie." It may refer to one or more of the following:

An older Chinese speaking woman comes in with her teenage daughter, who explains that her mother needs birth control pills for her PMS. However, House thinks the mother has a cold. House tells the daughter she can get contraception at any clinic in New Jersey, but gives her a prescription for birth control pills anyway.

The mother comes back, and complains that her breasts have grown. House realizes the daughter mixed up the medications. The daughter tries to blame House. House, however, can understand and speak Mandarin Chinese, and lets it slip, falsely, that the daughter is pregnant. He leaves the two of them to sort it out.