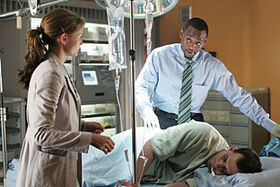 Spin is a second season episode of House which first aired on November 15, 2005. A famous cyclist who admits to blood doping becomes House patient and Cameron wants to report him. Meanwhile, House goes to Marks therapy group and he steals Stacy's files from her therapist.

Famous cyclist Jeff Forster collapses during a charity race. He is rushed to Princeton-Plainsboro.

House, meanwhile, is close to having his license expired, and Stacy is also bugging him about his dictation. Luckily, Cuddy calls House away to work on Forster's case, but also takes the opportunity to bug him about his paperwork. House is convinced Forster's problems are related to illegal drugs, but Cuddy has already ruled that out. Forster denies using Epo, but admits to blood doping and using a hyperbaric chamber, amphetamines and herbal supplements. Meanwhile, House is popping a Vicodin.

House meets with his team - Forster is suffering from respiratory distress. Foreman comes up with the idea that during his injections, he may have given himself an air embolism. Meanwhile, the team argues about the ethics of athletes using performance enhancing drugs. However, they do find the embolism.

Meanwhile, House is telling Wilson that Stacy is "pissy", indicating she is sexually frustrated with her husband.

Chase removes the embolism, but Forster develops a new symptom - he becomes unresponsive and starts drooling. Everyone immediately accuses Chase of screwing up the procedure, but Chase denies doing anything wrong.

Meanwhile, House crashes Mark Warner's group therapy session on the pretext he needs help with his leg. Naturally, House and Mark explore their adversarial relationship during therapy. The therapist throws House out of the session.

The tests are all negative, and he is still showing general muscle weakness. House orders antibiotics in the event it's an infection. Meanwhile, Forster's manager is pushing Cuddy to speed up Forster's diagnosis. The manager gives Cuddy a big check. The team stays late for the lumbar puncture. However, during the procedure, he goes into respiratory arrest. The lumbar puncture doesn't show anything.

Stacy confronts House about crashing Mark's therapy. House once again puts it down to sexual frustration.

Wilson tests for blood cancer, which would explain the symptoms, as would an improper diagnostic procedure. During the procedure, Forster asks if this is something he did to himself.

Wilson also finds out that Cameron has called the newspapers to tell them about Forster's cheating. Wilson admits to Cameron that he cheated on his wives, and that telling them is what ruined most of his relationships.

Cuddy finds out about the leak to the press, and Stacy confronts the team and accuses House of being the leak. However, House figures out that Forster was injected with epo and his manager must have administered it. He also figures out the manager leaked the cancer story to the press. The manager admits to the leak, but not injecting epo. Forster fires his manager on the spot.

They treat Forster with pregnazone and he starts to improve, but soon his red blood cell count is plummeting again. House orders a scan of Forster's neck to the confusion of the team. However the scan shows a thymoma (tumor of the thymus gland). House figures out his aplasia is chronic, not acute, and that the blood doping and hyperbaric chamber treated the problems by coincidence.

House injects Forster, whose muscle weakness immediately disappears. However, after the drug wears off, Forster collapses.

House goes to Stacy to apologize for his behavior, but he asks Stacy whether he loves or hates him. She answers both, but she only loves Mark. Stacy suggests they deal with each other.

Cameron is frustrated that the blood transfusions Forster needs for his condition essentially gives him permission to cheat.

Cameron admits to Wilson that she once fell in love with her husband's best friend while her husband was dying. Wilson admits that his wife was fine, but he met someone who made him feel good and he didn't want to let the feeling go. Cameron points out you can't control your emotions, but you can control your actions, and she never acted on her feelings for her husband's friend.

We last see House breaking into the therapy room to review Stacy's file.

A recent ex-smoker comes in with diarrhea. The patient is using gum to deal with his oral fixation. House points out the sorbitol sweetener in the gum is a laxative.

House: How am I supposed to practice medicine with a lawyer looking over my shoulder?

House: You know I can't do that!