TB or Not TB

Sửa đổi
TB or Not TB 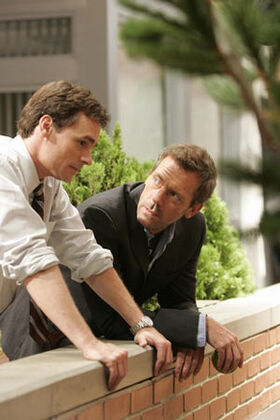 TB or Not TB is a second season episode of House which first aired on November 1, 2005.

While giving a speech to potential donors, famous humanitarian and tuberculosis specialist Dr. Sebastian Charles collapses. He is taken to Princeton-Plainsboro Teaching Hospital for treatment.

At the hospital, Charles diagnoses himself with TB. However, House is not convinced. When House meets Charles, House acts in a typically insulting manner. House is opposed to having Charles sit in on the differential diagnosis. Charles takes over and outlines his own confirmation and treatment plan. However, Charles refuses to take care of himself, constantly calling potential donors on his cell phone.

House calls his team back in the absence of Charles to continue the differential. House thinks TB is not likely as it has progressed too quickly. House orders a stress test to see if Charles' heart is causing his symptoms.

House is clearly not impressed by Charles's humanitarian work, and attempts to convince the rest of his staff, rather unsuccessfully, that Charles is driven by the same selfish human needs as everyone else.

The stress test is going smoothly until House literally cranks the machine to 11. However, the abnormal stress appears to prove that Charles needs a pacemaker.

Charles is clearly taking a shine to Cameron and offers her both a job with him in Africa and a date. However, during an attempt to climb down the stairs with her, Charles collapses and vomits.

Given the new symptoms, the diagnosis of the heart problem is clearly wrong. While the other tests proceed, the TB test shows positive. House is still not convinced TB is causing the symptoms, but agrees to treat the TB. However, because Charles feels taking treatment himself while thousands of Africans can't afford the necessary drugs is somewhat hypocritical, he refuses treatment for the TB.

House continues with the differential diagnosis. House then starts dissing Charles to the media (using Cuddy's name). He then goes to Lisa Cuddy to ask her to force Charles to agree to tests and treatment. However, Cuddy instead joins the media attention. Meanwhile, Cameron attempts to get Charles to agree to palliative treatment. However, House decides if Charles wants to die of a third world disease, he should live without air conditioning, phones, television, running water and media attention. House turns off the air conditioning in the room.

During the press conference, House watches it on TV in the coma patient's room and notices Charles is sweating instead of turning red (TB makes it nearly impossible for a patient to regulate their own temperature - he shouldn't be sweating at all). He goes to Charles' room and sees that Charles is going into cardiac arrest. House then turns to the TV camera and shouts "That is NOT TB!".

House finally gets Charles to agree to be treated for TB as he points out that cardiac arrest while overheated is not a symptom of TB, and he threatens to reveal the real cause of death after the inevitable autopsy. Charles points out that while he can accept failure, House cannot, and that is the difference between them.

At the treatment for TB proceeds, Charles' symptoms decrease and the team focuses on the symptoms that remain to try to reach a new diagnosis. Focusing on Charles' occasional low blood sugar, House decides it is a small insulin producing tumor. This would also explain the result of the stress test. However, such tumors are almost impossible to find. They decide to attempt to force the tumor to produce insulin, which would cause the patient's blood sugar to plummet, but would indicate its location. Finally, after Charles goes into a seizure during the procedure, the tumor indicates its presence. It is easily removed with surgery.

Cameron decides not to date Charles, saying he will be in Africa most of the time. However, House thinks it is just another example of Cameron being attracted only to damaged men.

One patient has a headache, and House finds her sinuses are clogged as well. He diagnoses an allergy to her new cat. When the patient resists the drugs for the condition, he suggests using a bag and a river to take care of the cat.

While Foreman fills in for House at clinic (wearing House's name badge), he meets a woman who thinks she has breast cancer. His initial examination shows that the lump is benign, but the patient insists on a biopsy. The patient then complains to Cuddy about "Dr. House's" behavior. When Cuddy insists House apologize, House naturally can't admit it wasn't him (he was skipping clinic duty), but points out that the only reason that Cuddy is paying attention to the patient was because it was him - if the complaint was against Foreman, Cuddy would have ignored it. House settles the matter by deliberately putting the tip of his cane on the patient's foot, then apologizes for being so clumsy in front of Cuddy. Since the patient thought House was just a cripple, she didn't see the cane incident as deliberate, proving House's point about perception.

What kind of selfish jerk wouldn't take advantage of that?
First used by Dr. Charles to say why he feels he must use media attention that is focused on him to raise awareness of his cause. Later used by House as a justification to Cuddy to behave badly when he believes people will perceive him as crippled.