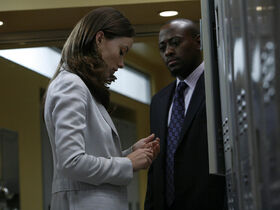 A woman who collapses during a cooking class turns out to be a renowned cancer researcher who gave up her career to pursue personal fulfillment. This prompts the docs to grapple with their own pursuits of happiness. Meanwhile, Cuddy decides to make House's life more miserable than it usually is, and Thirteen's health takes a turn for the worse.

A cooking assistant starts feeling faint. She looks at her reflection and says she has cyanosis. She then says she is a doctor, and also that she needs a doctor before she collapses.

Thirteen is in bed with Foreman. Wilson is cleaning dishes. House is coming into work and finds that the elevators are all out of service. He reluctantly starts climbing stairs and finally hobbles into his office. His team says the elevators are now working. They tell her about the case of the doctor/cook. House orders steroids and a CT Scan to look for hyperinflation.

The patient is impressed with the speed of the testing schedule. The patient informs the team she quit being a doctor after a medical procedure convinced her she was wasting her life. She is happy working in a kitchen because it is what she always wanted to do.

House goes to see Cuddy who shows him videos of her daughter. House wants to know why the elevators are not reliable. Cuddy is not concerned and is mad at House for forcing her to work more hours at the hospital because Cameron couldn't handle him.

House finds the elevators out of order again, but they are actually working. He figures that someone is trying to fool him into thinking they are always broken and gets on the next elevator.

The team discusses why the patient gave up on her work. House tells them people do what makes them the happiest. He then orders a biopsy on the patient.

Foreman gives Thirteen her examination. She is complaining of a headache but is not concerned. She is still doing well on the memory tests.

The patient doesn't want to undergo a biopsy because she knows it will keep her in the hospital for two weeks. Taub is telling her about being a plastic surgeon but how his job now makes him feel more fulfilled. The patient said that wasn't enough for her. The patient complains about something and Taub starts drawing blood out of her abdomen.

The patient is now suffering from a bleeding liver. House is leading his team when he trips over a trip wire placed across the doorway of his office. The MRI of the liver is clear. Foreman thinks it might be a granuloma and Thirteen thinks that was caused by blastamycosis. House wants a lung biopsy. House notices that Thirteen has lost her peripheral vision and asks Foreman if he changed her medication.

Wilson comes in after hearing Cuddy is playing practical jokes on House. House says he's not going to escalate until he needs something, but Wilson says that he's just guilty about keeping Cuddy at the hospital. Wilson is surprised about who House is treating and goes to see her. He asks her why she quit. She tells him someone else will make the breakthroughs but he wants to know why he should keep fighting when she was willing to give up. She asks him what kind of rut he's in.

Taub asks his wife if she wants kids. They haven't talked about it in ten years. She didn't really want kids from the beginning and she really doesn't want them now.

Foreman tests Thirteen's peripheral vision and realizes she is losing it. Thirteen realizes she's on the drug and might have to go off. Foreman tells her he switched her to the real drug. She realizes she has to change back. She goes to tell House that the patient doesn't have blastamycosis. She also is scared that Foreman has done something so stupid even though they've only been dating a couple of weeks.

Foreman goes to see the patient, who has scratched her scalp so badly she penetrated right through to her brain.

Taub repairs the damage, but the patient is still itching. The fact that she scratched so far means its a brain problem. House thinks it might be meningitis or encephalitis. House orders an MRI of her head. House realizes that someone has stolen his cane.

Foreman asks if Thirteen wants to talk about her headaches. She's off the drug, but they are getting worse. Foreman thinks she needs an MRI.

House uses a mop and bucket to work his way to Cuddy's office. He tells her working moms make better mothers. Cuddy says that's a rationalization. He refuses to dump the mop water in her office and instead uses it to leave.

Foreman does an MRI on Thirteen and apologizes for switching her. Foreman sees something bad.

House manages to work his way back to his office to find his other cane. He thinks the patient has nerve damage and tells Taub and Kutner to shock the patient. He then chases down Foreman who tells him that Thirteen has a brain tumor. He's going to tell the drug company and see if they have a treatment, but House talks him out of it because he reminds him that Thirteen will need someone who still has a medical license.

Foreman goes to Thirteen who is now blind and bleeding from her leg when she tripped over something.

Wilson finds House sleeping in the lounge. House tells him Cuddy had his power cut off in his apartment. He goes back to his office - Taub and Kutner have been trying to page him. Taub thinks it might be a spinal hemangioma, so House orders them to go look for one.

House finds Thirteen in her apartment, but he's looking for Foreman. He realizes that she's blind. Foreman has gone to the drug company and House tries to intercept him. House admits that he told Foreman to switch the medicine if he loved her. He convinces Thirteen to call Foreman.

Wilson confronts Cuddy about the practical jokes. He tells her that she actually likes working with House. If she really wants to stay with her baby, she should fire House.

House and Foreman start radiation therapy on Thirteen. Foreman didn't think the drug would hurt Thirteen because no one else was having adverse effects.

Taub and Kutner are doing a scan on the patient. Kutner wants to know what's going on with House, Thirteen and Foreman. They find the hemangioma, but they find other masses as well, and all over the place. They believe it is mesothelioma - a form of cancer. However, they were not there two days ago. House wants Wilson to do a biopsy. Kutner wants to know what's going on. He thinks that Thirteen may have been admitted.

Wilson does the biopsy and apologizes to the patient. He admits he is stuck in a rut because his girlfriend died and he is still living in her apartment without disturbing her things. She tells him the only wrong thing is to do nothing. The patient realizes something weird is happening during the biopsy.

The biopsy bled, which doesn't happen with mesothelioma. Taub thinks it might be another form of cancer. The patient has a cardiac arrest from bleeding into her heart. As Kutner and Taub work on her, the patient starts bleeding from everywhere.

They start a transfusion of platelets, but they can't stop the bleeding. House proposes cutting off the arteries to the tumors, but that will also kill healthy tissue.

House finds Cuddy with his cane. She apologizes. House thinks it might be related to her menstrual cycle. However, he suddenly thinks of something. Cuddy tells him he's being a jerk again.

House realizes that the patient's bleeding coincided with her period. The patient had a myoma eight months ago and the surgery released uterus cells everywhere into her body. They grew and started bleeding in conjunction with her menstrual cycle.

Foreman goes to see Thirteen, who realizes she can see him again.

The patient starts improving. She tells Taub to go to bed happy tonight.

Foreman calls the doctor in charge of the clinical trial to tell her the trial isn't going well. House finds him and realizes he told them. They agreed not to go after Foreman's license. Foreman realizes that House is in the locker room to take something out of someone's locker.

Taub goes to tell his wife he can't be happy without her.

Foreman and Thirteen start sleeping together again. She tells him he snores.