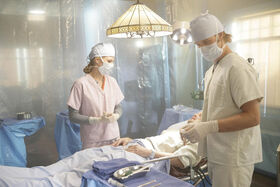 The Itch is a fifth season episode of House which is scheduled to air on November 11, 2008.

An agoraphobic man falls ill and refuses to leave his home to be treated at the hospital. Therefore, House and the team go to his home to figure out what might be wrong. Cameron takes charge of the case as she had treated the patient in the past and she and the team figure out ways to treat him at his home. However, the patient’s condition worsens and it becomes difficult to treat him at his home, therefore House and the team plan to get the man into the hospital for surgery. Meanwhile, Cameron and Chase attempt to work through issues in their relationship, and House deals with an annoying itch he cannot seem to scratch, with Wilson making his own analogies about the problem.

A man lies nearly unconscious on the floor when a team of emergency personnel break in. As they take him to the ambulance he starts to panic and attacks the emergency personnel. He runs back into the house, slams the door and tells them to leave him alone.

Cameron comes in with the case. The patient is having headaches and seizures. He can't come to the hospital because he is agoraphobic.

Cuddy calls House into the hall. They start talking about their kiss the previous night. Cuddy says she was emotional about the loss of the adoption and says House was just being human.

Cameron still tries to talk House into taking the case. They discuss how they are going to do a diagnosis without all of their equipment. House tells them to go search the house for toxins.

Cameron and the team go to the patient's house, but he resists letting them in. He only wants to let Cameron in. He agrees to let Cameron examine him, as long as the rest aren't there in the room. The rest of the team searches the apartment.

Cameron tries to induce a seizure. The patient remembers that Cameron was part of the outreach program that came to his house by her voice. He makes a living writing technical manuals, but says he's happy never leaving home.

Wilson comes in to talk to House about seeing Cuddy the previous night. He admits that he made out with Cuddy and Wilson is shocked. He plans on ignoring her for the rest of their lives. Wilson thinks that by trying to hide it from him, he actually feels something.

Taub reports that the house is clean. House and Cameron talk about trying to induce a seizure and Cameron's relationship with Chase. House thinks the seizures are related to his phobia because they happened in his entry way.

Cameron finds a partial bowel obstruction with the portable ultrasound. House goes to see the patient. He explains his bowel is blocked and they need to take him to the hospital. Drugs are a possibility, but the bowel may still rupture. The patient still resists going out of his house. He suggests getting Chase to come to his house to do exploratory surgery.

House tells Cameron he's really planning to anethestize the patient and take him to the hospital. They get into an argument about the ethical problems, but Cameron agrees.

They get ready to do the "surgery" and start the anasthetic. When the patient is unconscious, the ambulance personnel arrives.

Cameron and Chase are discussing their living arrangements when Cuddy confronts them over the surgical equipment they signed out. She confronts House about the ethics. She then notices a sore on his hand, but House says it's nothing.

Cameron wakes the patient and tells him he's in the hospital. The patient panics and Cameron has trouble sedating him. She accidentally damages the patient's carotid artery in the struggle.

The patient calls his lawyer and arranges to leave the hospital. The lawyer is now the medical proxy. Cuddy takes them all off the case.

House has no intention of getting off the case, and tells Cameron to give the patient drugs to attempt to clear the blockage. She gets into an argument with Chase about whether she should be working for House given the fact she quit. Cameron manages to regain the trust of the patient.

Cameron proposes trying the surgery again, this time in the patient's house. Taub agrees to do it with assistance from Kutner. Kutner hasn't been a surgical assistant before. The patient's lawyer is there too. They find the patient has intestinal atrophy. They accidentally start a fire from the gas from the atrophy. House puts it out.

Chase brings groceries to the patient's house, but gets into a fight with Cameron about her spending too much time at work. The patient cries out and Cameron finds that his legs have gone numb.

Foreman thinks it might be Celiac disease. House wants to feed him wheat to see if the symptoms get worse to confirm. Foreman orders both force feeding and the usual blood test for the disease.

Wilson goes to see Cuddy. He admits he has feelings for her, but it wouldn't be fair to House or to Amber. Cuddy asks him out for dinner, and Wilson agrees. Then Cuddy suggests they have sex because she's figured out Wilson is just trying to make House jealous. She tells Wilson everyone will be happier if she doesn't try to have a relationship with House.

Cameron discusses the agoraphobia with the patient. Doctors blamed his mugging, but he has always been happier not going out. His girlfriend, who died during the mugging, was the only person who made him want to go outside.

House destroys the blood sample test Taub is examining. He's hoping to delay the diagnosis so the patient will be in more pain so he will agree to come to the hospital. House thinks that Taub's marriage is falling apart and that he agreed to do the surgery to keep his skills up and to stay away from home to work. Taub denies it, but House doesn't believe him.

House has a dream about causing an explosion. He goes to Wilson's house, and Wilson realizes that he really wants to see Cuddy. House claims there is a mosquito in his house and he has a sore on his hand from the bite. Wilson says it's obviously a self caused sore and there is no mosquito. Wilson tosses him out and tells him to either go home or to ask out Cuddy.

Instead, House goes to the patient's house. The tests are still inconclusive. House orders another endoscopy. While they try to move the patient, he has a heart attack. House uses it as an excuse to call the lawyer to get permission to admit him. The lawyer agrees, but Cameron uses the portable defibrillator to stabilize him anyway. He doesn't have to go to the hospital.

The patient needs a temporary pacemaker because his heart is beating too slow. They start discussing toxins again. The cleanliness gives House an idea. The patient has been mixing ammonia and bleach to clean his tub - chlorine gas. The gas is stored in fat and when the patient lost weight he would have continued to receive a bigger dose of the poison. House orders steroids and sodium bicarbonate. However, they realize the patient will need a permanent pacemaker and that Taub doesn't have the skills to do it.

Cameron is trying to talk Chase into doing the surgery in the patient's home. He refuses because he needs a full surgical suite to do the procedure and he realizes that Cameron is just looking for a reason to be angry with him. He admits that realizes she has never let him feel welcome in her home. He tells her he's not going to chase her forever.

The patient is getting worse. Cameron realized House had switched the patient's morphine for saline in an attempt to get him into the hospital and switched it back. They start talking about how the patient's agoraphobia started at adolescence. All of a sudden, House thinks of another poison that could cause the symptoms. He thinks the patient has lead poisoning and takes a bone biopsy. They find traces of the bullets from the mugging. House tells the patient he has PTSD and that his agoraphobia really did start when he was mugged. He realizes that his first attack came on his girlfriend's birthday, and he tried to take roses to her grave, but failed. He tells him to admit to himself that he's miserable being cooped up inside. He calls him a coward and leaves.

Cameron goes to Chase and tells him he was right about believing that her husband's death is the reason why she is having trouble forming a permanent relationship with him. She has cleaned out a drawer for him at her apartment.

House finds the real mosquito, but lets it live. Rachel goes out to cuddle with Taub on the couch. Cameron and Chase are putting Chase's belongings in his new drawer. The patient steps out of his house. House goes to Cuddy's house.