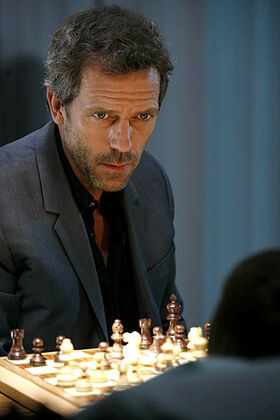 The Jerk is a third-season episode of House, scheduled to be aired May 15, 2007 in the United States. The team deals with a teenage boy whose personality is even more obnoxious than House's.

After winning a game of blitz chess, a teenage boy named Nate brutally beats his opponent with the chess clock. He then collapses with a severe headache.

During the examination, the patient takes the opportunity to insult Chase. The patient used to be a vegetarian, but has recently started eating meat. His mother says his personality has been this obnoxious since he became a teenager. He has also been in a lot of fights lately because of his behavior.

Chase outlines the symptoms for the team - rage and head pain. House also believes the patient is suffering from a personality disorder, which leads him to believe it is cluster headaches. House orders blood thinners and magnetic cranial stimulation.

Foreman agrees to work on the treatment so he will have time later for a job interview. During the magnetic treatment, the patient complains of other pain caused by the beatings he has been receiving. The patient then takes the opportunity to insult Foreman.

Chase informs the mother that the underlying disease may be causing his personality problems. The mother is relieved when she hears it, and admits that she is at her wits end trying to deal with her son.

The treatment doesn't help the pain, so the team starts coming up with alternative diagnoses. House still thinks it is cluster headaches.

Foreman then confronts House - someone has called his potential employer to cancel his job interview. House denies canceling the interview. Foreman doesn't believe him, but House maintains his innocence.

House then goes to Cuddy and accuses her of canceling Foreman's interview. Cuddy denies doing it, although she admits she wants to keep Foreman. He then asks Cuddy if he can give the patient psilocybin mushrooms to treat the cluster headache rather than doing exploratory surgery. Cuddy agrees if the mother consents.

Chase explains the risks to the mother. The patient is all for the treatment and insists the mother consent as his pain is getting worse.

They administer the mushrooms and the pain starts to go away. The patient then flashes Cameron, who notices that his testicles are undersized.

They discuss what might be causing the undersized testicles. House orders a biopsy of the pituitary. The patient is opposed to it, but the mother consents. However, before they start, the patient starts to become disoriented. He turns out to be jaundiced - a symptom of liver damage.

The liver damage is life threatening, and adds another symptom. However, the liver couldn't have been causing the symptoms the patient had the day before. The patient doesn't have any history of drug use that could result in liver damage. They start focusing on his recent abandonment of vegetarianism. House orders that he be fed hamburger to see if he has a disorder that keeps him from properly metabolizing meat protein.

Cuddy pages Foreman. She offers him double his salary and his own diagnostic team. Foreman refuses the offer because he doesn't want to be around House and someone at the hospital tanked his job interview.

The patient doesn't want to eat the hamburger. An enraged Chase, fed up of the patient's endless threats and jibes convinces him to do so by threatening restraint and force feeding.

Cuddy goes to Wilson and accuses him of tanking Foreman's job interview on the basis that whoever did it likes House. However, Wilson wants Foreman to leave, and he wants someone new who will confront House like Foreman did.

The patient is properly metabolizing the hamburger, so House orders him starved to see if his blood sugar spikes. During the procedure, they try to get a urine sample, and the patient becomes enraged. He urinates in the middle of the floor, but starts urinating blood with the urine.

The blood in the urine shows that the patient's kidney failure. They put the patient on dialysis. They once again start trying to come up with an appropriate diagnosis. Foreman gives the patient a sedative to take a blood sample.

Wilson accuses Cameron of sabotaging Foreman's job interview. Cameron denies it too. Cameron then accuses Chase on the basis that he doesn't like Foreman. Chase denies it as well. It being Tuesday, Chase reminds Cameron again that he likes her. He then finds a positive result for an enzyme deficiency.

However, the deficiency doesn't explain all the symptoms. House decides to place the patient under stress to see if he can speed up the process. He challenges the patient to a game of speed chess after he shoots him up with adrenaline. They trade insults during the game. Finally, the patient starts having a seizure. House resigns the chess game.

House studies the chess game while the team adds another symptom - the seizure. Foreman suggests amyloidosis. House finally decides to try to eliminate his personality as a symptom - all the other symptoms would be explained by amyloidosis. If it is that, the patient will require a bone marrow transplant.

However, the tests can't confirm the diagnosis. When Foreman starts to argue the diagnosis but agrees to House's course of treatment, House accuses him of not being ready to trust his own judgment.

Chase goes to House and accuses him of sabotaging Foreman's interview on the basis that only House would put everyone at each other's throats. House admits it, but says it's because the job wouldn't have challenged Foreman. Chase tells House to talk to Foreman if he wants him to stay.

At that point, House realizes he missed a symptom - the patient was unable to bend his thumb when he played chess. The patient has too much iron in his blood - haemochromatosis. It explains all the symptoms and his body aches. He will need regular bleeding and dialysis, but he will live a normal lifespan. House then says he would not have lost the game. The patient admits he knew that, but bluffed House into thinking he was in a hopeless position.

House finds Foreman still testing for amyloidosis. He tells him to run the test again rather than telling him the patient's real diagnosis.

Cameron guessed that the patient had haemocromatosis during the first differential, but the suggestion was rejected as House believed that the patient's personality was a symptom. In addition, when Foreman was treating the patient, he complained of aches which he attributed to the constant beatings he received. However, the aches were a symptom of the underlying illness and had nothing to do with the beatings.

A patient comes in with sunburn with mysterious white marks. House figures out how much change is in his son's pocket. He then matches up the coins with the father's white spots - his son placed them on him while he was asleep.