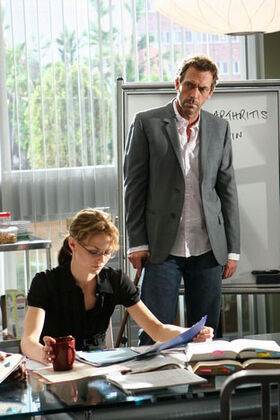 The Mistake is a second season episode of House which first aired on November 29, 2005.

During a recital at her daughters' school, a woman collapses with severe abdominal pain.

The scene is now six months later, and the diagnostic team is working with Stacy Warner to prepare for a medical profession disciplinary action hearing. Stacy resists working with House, but Cuddy points out that since lawsuits against House generates most of the hospital's legal work, she can't work at Princeton-Plainsboro unless she deals with him.

Stacy starts preparing Chase for the hearing. They review Chase's memory of the patient's treatment.

The patient presented at the clinic with joint and stomach pain. Foreman does the initial examination, and an irregularity in her eyes interests House in the case. The team starts trying to establish a diagnosis. House assigns Chase to perform a pelvic exam. It appeared to be Bichette's disease, and Chase prescribes prednisone.

However, a few days later, the patient comes back to the clinic, and the test results are positive for Bichette's. The patient mentions her stomach hurts, and Chase writes her a prescription. Chase admits he didn't ask her more about the stomach pain, believing it was acid reflux or upset stomach from the prednisone.

House tells Wilson he isn't worried about the disciplinary hearing because he never met the patient. However, Wilson points out that House never meeting patients is bad medical practice.

Chase admits to Stacy that after the patient left, he thought that he should have asked if the patient had blood in her stool. Sure enough, the patient is in the emergency room two hours later with a perforated bleeding ulcer. She needs emergency surgery, but stomach contents had leaked into her abdominal cavity, causing sepsis.

Stacy talks to Cameron about why Chase forgot to ask about the blood in the stool during the initial examination. Cameron doesn't know why he failed to do so and suggests she ask House. Stacy goes to Foreman instead, who suggests Chase doesn't care that much about patients, and again tells Stacy to ask House.

House tells Stacy that given the patient had bleeding ulcers, there was no way she was "fine" when Chase examined her two hours previously. At the time, House chastised Chase for failing to ask about diarrhea and rectal bleeding. Stacy can't understand why House wouldn't fire Chase over such a mistake. Stacy confronts Chase about the failure to ask the question.

Because of the sepsis, the patient suffers liver damage due to blood clots and requires a liver transplant. Cuddy refuses to put the patient on the transplant list because she also has vasculitis and kidney damage. House convinces Cuddy to agree by pointing out that the patient will sue the hospital over the missed diagnosis. However, there is no suitable liver available for her. Her brother insists on donating a lobe from his liver, offering rushed screening tests which prove that his liver is compatible.

After bribery fails to convince an unfaithful surgeon, House blackmails him instead to perform what amounts to a highly risky transplant. It turns out House tells the surgeon's wife about the infidelity anyway after the operation.

House and Stacy confront each other about his looking into her therapy file.

Although the transplant was successful, the patient returns two months later. House forces Chase to perform the examination as punishment for missing the initial diagnosis. She has a slight fever, so Chase orders tests, just before her fever spikes. The team argues about whether it is organ rejection or an infection. The brother comes in to confront House, and House immediately sees he has had hepatitis C. House suspects that this has led to cancer in the sister.

House turns out to be right - the donated liver had a cancerous hepatoma, which spread quickly due to the sister's immune system being suppressed. They luckily are able to operate on the brother and save his life, but the sister is terminal.

Chase is sued over the sister's death. Chase admits that he tried to help the sister get a black market transplant, but backed out when he realized his medical license was on the line. He instead tells the sister that she will probably not survive the surgery or even the trip to get a black market operation, and urges her go home to spend time with her children before she dies. The woman subsequently passes away and Chase examines the brother post-surgery. The brother tells Chase that he and the orphaned children are going to have to move as they can no longer afford to live there. Chase then tells the brother he made a mistake diagnosing the ulcer and that he was hung over at the time. This infuriates the brother, leading him to sue,

House confronts Chase; he doesn't believe Chase was hung over. House was aware that Chase got a phone call about his father's death on the same day the patient came to confirm the Bichette's test. It was also the day he learned his father had had lung cancer for several months and never told his son. House then reveals that he knew about Chase's father's cancer and was told by Chase's father not to tell Chase about it. They then discuss what has to be done about the disciplinary action and lawsuit. The lawsuit is settled and presumably the brother has enough money to keep the children in their family home.

Stacy tells House that she never considered selling him out to save the hospital. She also admits that there were some good things about their relationship.

The discipline committee takes into account Chase's father's death, and suspends him for a week despite his lying and the mistake. The committee is concerned that House has been accused of blackmail and avoids meeting patients and orders him to be supervised by another doctor for one month. Cuddy decides to appoint Foreman to supervise House for that period.

At the clinic, House examines a well-off man with a cough, who has no health insurance. House discusses with him the plight of a hypothetical patient with idiopathic pulmonary fibrosis which requires a lung transplant, but since he doesn't have insurance, he won't be able to afford it, and no insurance company would cover him with such a serious pre-existing condition. If only he had gotten himself insurance before a doctor had diagnosed him...!

However, it turns out House lied to him so he would go get insurance - the patient merely had a cold.