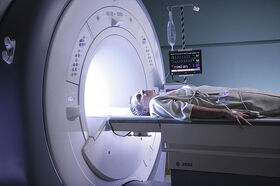 The Social Contract is a fifth season episode of House which is scheduled to air on March 9, 2009. House and the team take on the case of Nick, a book editor who loses his inhibition and starts insulting coworkers at a dinner party one night before falling ill. The team realizes Nick has frontal lobe inhibition, which has caused him to lose his filter and vocalize all of his innermost thoughts, resulting in extremely insulting outbursts. As Nick’s free speech lends to some amusing and insightful comments regarding the team, he must deal with the consequences of being unable to lie to his wife and everyone else important in his life. Meanwhile, House suspects Wilson and Taub are keeping something from him when he catches them both in a lie. House is determined to get to the bottom of it.

An author is having a party, but he's having trouble giving a speech. His editor starts making negative comments about his book. He says he doesn't know why he said it, but then he starts insulting again. He's asked to be quiet, but he keeps going. Suddenly, he collapses.

Cameron brings the case to House. The patient is suffering from frontal lobe disinhibition - he's unable to control what he says. House thinks it is a brain tumor, and Thirteen suggests it's in a nasal cavity.

Taub and Kutner go to see the patient, Nick, who is still saying everything he thinks. Nick's daughter has an auditory processing deficiency. Nick makes a joke about Taub's nose. The wife is trying to arrange a breast cancer walk, and he starts insulting that too. She walks out.

House invites Wilson to monster trucks, but Wilson declines, claiming he doesn't like monster trucks, that he only puts up with them for House. Kutner reports no tumor in the nose, but the patient will lose his wife if they can't fix him. They discuss whether Nick is truly nice or mean, and Kutner compares the choice to be nice to Harry Potter's desire not to placed in Slytherin House.

Foreman and Thirteen are with the patient when Cuddy walks in. The patient can't stop talking about how much he wants to have sex with Thirteen and Cuddy. House was hiding behind equipment - he called Cuddy in to embarrass her. He points out that the patient thought Cuddy was prettier than Thirteen. She smiles after she chews him out.

Foreman talks to Thirteen about whether she's upset that the patient preferred Cuddy. They start a brain scan and note that part of the brain isn't lighting up. They decide to start him on steroids to see if he improves.

Taub asks Kutner if his nose really is too big. House joins Wilson in the cafeteria and tells him he has no core personality and he just tries to please who he's with at the time. House thinks he's lying about monster trucks, but Wilson claims he is just playing racquetball with Taub that night. He didn't want to tell House since he can't play anymore.

Nick doesn't improve on steroids and Foreman realizes his kidneys are failing and he needs dialysis.

Taub thinks it might be a form of leukemia, but his white blood cells count is normal. Taub tells House he's played raquetball with Wilson four or five times. House doesn't believe him. House wants to test the daughter for peripheral nerve damage and test the patient for glucose tolerance. He orders Taub to draw Nick's blood so he can't play raquetball with Wilson. He also tells Taub to admit he's lying.

Kutner goes to test the daughter's nerves by alternatively using hot and cold to see if she can tell the difference. The wife is worried about what her husband is saying and what he must really think. The daughter doesn't react, then starts screaming. She got burned because she didn't tell Kutner that she felt the heat. She wanted to help her father.

Taub is with the patient, who asks him to keep Thirteen away from him. He then says Taub has cheated on his wife and that everyone already knows.

House pages Taub to the morgue to report. He wants to see Taub play racquetball. Taub starts playing. Nick's glucose is normal, but Taub still thinks it is an endocrine problem. Taub crashes into equipment and admits he never played with Wilson. However, House knew already, as he gave Taub a squash racquet.

Kutner goes to do a thyroid scan, but the patient wants to know why his daughter was burned. He thinks his daughter doesn't have an auditory disorder, she's merely below average. The daughter runs out of the room, upset. The patient has a fever and his lungs are full of fluid.

It appears the patient has an infection. However, the patient hasn't been out of the country and no one else is sick. House tells Kutner to get a better history anyway.

Taub tells Wilson that House found out about the fake raquetball game.

Kutner goes to examine the patient. The wife is there and the patient is afraid he's going to say something harsh again. Kutner reports to House that the history is boring, but that the wife rescues dogs and he thinks it is Wyles disease and House agrees. He orders antibiotics. Taub comes out with Wilson's emails, one of which is to an oncologist at New York Mercy. She's an expert in suicide in cancer patients. Taub asks House if he thinks Wilson might be suicidal, but he dismisses the suggestion.

The patient's fever and lung fluids start to improve. However, the frontal lobe disinhibition appears to be permanent. Surgery is too dangerous. The patient throws them out.

House still wonders why Wilson was out walking. He lets him know he knows about New York Mercy. Wilson gets angry and tries to leave. House follows him, wondering why he didn't come back to get his coat when it was so cold out. Wilson says he just wants some privacy from House.

House goes to see the patient. He's angry that he's going home just to drive his family away. He asks House to operate, but House points out the danger: it's near the brain stem. The patient would rather die than live as he is. He's always been impatient, but he has worked at controlling it, and now he doesn't want the lack of control. He doesn't like who he's becoming.

House takes the case to Chase so that he can talk to his boss, who is a neurosurgeon with an ego who might try the surgery. Chase wants to know why House cares. House tries to give excuses, but he finally admits he knows what it is like not to have any close friends and drive away anyone who cares.

They start the operation. Wilson comes to see House in the observation lounge to apologize. House figures that Wilson lost someone, and that he's discovered that his homeless brother Danny is now in a psych ward. Wilson didn't tell House because it's likely House would remind him of how badly it could go. House admits he's right and offers to come along.

The patient goes to the recovery room. His heart and breathing are doing well on their own and he starts talking. However, his disinhibition seems to be the same. In addition, his body temperature starts to drop and he goes into cardiac arrest. His wife walks out heartbroken over what he said about her.

There is nothing wrong with the patient's heart, but his body temperature is out of control - it wasn't an infection. Foreman proposes a full body scan, but the team points out how useless it is. Foreman wants to do it anyway.

Wilson and House are waiting for Danny. They talk about the last time Wilson saw him - a random sighting. Wilson came to work in Princeton because that's where his brother was.

The team reviews the scan. They feel they need to do targeted angiograms, but it may take too much time.

House still wants to know why Wilson went outside without his coat. He thinks that Wilson wanted to know how his brother felt out in the cold, and that Wilson feels guilty. Wilson tells House about his brother's problems at Princeton University, and how Danny would keep him busy for hours on the phone while Wilson was at medical school. One night, Wilson hung up on Danny so he could study. The next day, Danny ran away and didn't take his medications with him. House says he shouldn't blame himself for just hanging up the phone. House realizes something about the patient. Wilson leaves to see his brother. The patient has Doege-Potter syndrome - an excess of human growth hormone from a benign fibroma that has caused an autoimmune condition. If they take it out, he will return to normal.

The patient improves and apologizes to Taub. Taub admits he does have a big nose. The patient's wife arrives to take him home. The patient is back to his old self, but there still appears to be some strain.