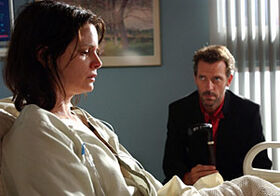 This is an article about the episode. For a description of the teaching method, see Socratic Method.

House: "You think I'm interested because of the schizophrenia."
Wilson: "Yeah. Pretty sure."
House: "Galen was pretty sure about the fumigation thing."
— House, discussing the 2nd century physician's treatment for schizophrenia.

The Socratic Method is a first season episode of House which first aired on December 21, 2004. While dodging Cuddy in the emergency room, House runs into the son of a schizophrenic woman who has been diagnosed with alcoholism. Intrigued by her schizophrenia and the fact she has a condition she's too young to get, he takes her case and finds multiple problems. However, when the patient does something unexpected, House starts to wonder if she's really mentally ill at all.

A schizophrenic woman is with her son talking to a social worker when she starts suffering the effects of a deep vein thrombosis. To quiet her down, her son gives her vodka while the social worker is away getting water. She starts complaining about the voices she hears. All of a sudden, she grabs her chest and collapses.

The woman is rushed to Princeton-Plainsboro, and House hears a page from Cuddy. He is hiding from her in the ER waiting room and meets up randomly with the patient's son, who asks if it’s a good hospital. An ER doctor tells the son about the thrombosis which broke off and went to her lungs, causing a pulmonary embolism. The son Luke argues that it can't be from the alcohol he's given her, but House stands up and shouts at the ER doctor for not checking whether or not the patient has other signs of alcoholism.

House takes the case and asks the team how the patient got a deep vein thrombosis. He points out that she's too young at 38 to have one without a prior history. He's taken the son's voluminous notes. He also rules out the schizophrenia as the cause of the thrombosis.

Wilson wants to know why House took the case. He says it's because she's too young to have a thrombosis. He also talks about the treatment of schizophrenics. He also tells Wilson he's going to speak to the patient. Wilson is shocked, but figures it's because of the schizophrenia.

House goes to see the patient, and sends the son out of the room. House asks the patient how much she drinks. Foreman is also perplexed about why House is talking to the patient - Chase says House likes people who aren't boring. House keeps questioning the patient. The patient says that no-one believes her, but House says he does.

House reports the patient has had tremors, which has caused her to stop shaving her legs two months ago. However, Chase realizes she had tremors since she was diagnosed and she must have cut herself before. House figures that she‘s probably bleeding more from the cuts. He orders blood tests. He also orders them to take her off the meds for her schizophrenia. Cameron wishes House a happy birthday. House doesn't react except to ask how Cameron knew (she saw a form while answering his mail with his birth date).

The team has trouble taking blood from the patient, and they have to restrain and sedate her.

The son confronts House about sedating his mother - she doesn't like getting Haldol as it "makes her soul numb". He starts reading to his mother. All of a sudden, she starts vomitting blood.

Foreman is arguing the Haldol couldn't have caused the vomiting blood. House notes that Foreman shouldn't have given her the sedative just because she spit at him. The clotting studies come back from the lab, but they are normal except for a prolonged PT time. Foreman realizes that this usually means the blood wasn‘t drawn correctly, but House agrees that Foreman probably did the draw correctly. House thinks the patient is bleeding from a Vitamin K deficiency. However, Cameron thinks it is a reaction to an antibiotic she was prescribed, but House says that the son‘s notes say she didn‘t take it. Chase thinks it is alcohol. House orders an environmental scan and an ultrasound of the patient's liver.

Chase and Foreman go to the patient's apartment. Foreman has stolen the son's key. The apartment is very well organized, with date labels on the drawers. Foreman finds some drug, but also an intact bottle of the antibiotic, disproving Cameron's theory. However, the Vitamin K deficiency seems to be confirmed when they find the refrigerator is full of frozen hamburgers.

Luke says frozen hamburgers are all Lucy will eat and he checked out the nutritional values on the label. House is explaining to the son how Vitamin K would be missing from the patient's diet. He tells the son he will continue having trouble taking care of his mom.

House is looking at what appears to be the son's X-ray. He says he realizes the son is only 15, not 18. House realizes why the son wants to stay with his mom. The son threatens to sue House if he squeals, but House says he was just bluffing - the X-ray wasn't even the son's.

Chase does the ultrasound and finds a mass on the liver, probably a tumor. Wilson confirms the tumor caused the bleeding. They break the news to the patient and the son.

The patient needs a liver transplant, but can't afford it. Even if she could, she probably wouldn‘t qualify because of her other medical issues. House wants to try to cut out the tumor, but Wilson points out it's too big under the surgical guidelines. House suggests they can make it shrink. They use ethanol to dehydrate the tumor to make it smaller to fool the surgeon.

Cuddy finds House in the clinic and says she knows something is up. House pretends it is about his birthday. All she wanted to do was to remind him he still owes clinic hours. However, after disposing of the present she was going to give House, she goes to get all of House's charts. She follows House into the men's room to tell him she knows about the shrinking tumor. House says he did it for the patient - he claims the guideline about tumor size is just to protect doctors from malpractice suits and to keep their statistics from going down.

Cameron wants to know why House isn't celebrating his birthday, but he dodges the question and sends her to assist with the surgery.

They proceed with the surgery, and Dr. Bergin realizes the tumor was shot up with ethanol. He does the surgery anyway, but tells Cameron he won't stand for that sort of thing again.

Chase tells the son that the tumor was likely due to alcohol, but the son still won't buy it. Chase is going over the care procedures when a social worker shows up to take him to children's services.

House is wondering why Cuddy didn't try to stop the surgery. The son confronts House about telling about his real age to social services as he leaves. All of a sudden, House says to Wilson that he doesn't think Lucy has a mental illness.

House starts reading to the patient. He accuses the patient of calling social services. She denies it, but House found a phone call from her room. House thinks this act of rationality and self-sacrifice rules out schizophrenia. In addition she was 36 when she presented - which is late. In addition, the drugs for it weren't working on her.

House goes to play "Happy Birthday" on the piano while he thinks about the patient. All of a sudden he grabs the son's notebook. He calls the patient's other doctors, even though it's late at night. They generally just hang up on him.

House goes to his team and asks what it could be if it isn't schizophrenia. He points out that specialists focus on diseases within their speciality. Cameron thinks it might be Wilson's disease, a buildup of copper in the body. House realizes that some of her other symptoms, like cirrhosis and problems seeing match as well. They scan her eyes and find the copper colored circles in her iris that show the disease. They start treating her. A few weeks later, she is her old self and is reading herself and is ready to be discharged. Her son comes in and they embrace, and then she tells him to get a haircut.

They run into House in the elevator, and she thanks him for treating her. He says you're welcome, but Luke doesn't want to talk to him. To cover for Lucy, House tells the son he had Cuddy call social services to get him out of his life. Wilson asks House if it's his birthday.

House is challenging a mother by telling her that her daughter doesn't have strep throat. What the mother really wants is for her daughter to avoid ice cream lose weight, but House just starts insulting the mother more for wanting her daughter to be thinner. He tells her to get her the cake for her birthday.

The next patient has hiccups. He's been hitting himself. House makes him do it repeatedly.

Wilson's disease is very rare, occurring in no more than 4 out of 100,000 people in the United States.