Tạo lập Wiki
The Softer Side 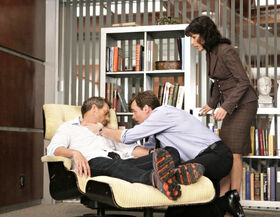 The Softer Side is a fifth season episode of House which first aired on February 23, 2009.

The team encounters a teenage boy who collapsed from severe pelvic pain after playing basketball. Tests reveal the boy has genetic mosaicism, or both male and female DNA, and the boy’s parents inform House and the team that the boy is unaware of his condition. They consciously chose a gender for him when he was born and raised him accordingly, never telling him about his unique condition. However, when his condition worsens and his life is threatened, the parents wonder whether they made the right decision. Meanwhile, Cuddy and Wilson suspect something is wrong with House when he starts acting way too nicely. When they discover the shocking answer, they must face the prospect that House may be changed forever.

In a flashback, we find a family dealing with their baby, who has both male and female DNA and ambiguous sexual organs - genetic mosaicism.

We come to the present day, where a boy is playing basketball, but is reluctant to take a shot until the last second, when he scores the winning basket. However, he soon grabs his lower right side and collapses on the floor.

Foreman and Thirteen are dressing for work. They are discussing how they faked breaking up to fool House.

House is having breakfast with Wilson when Cuddy comes in with the case and asks House not to reveal the patient's mosaicism to him.

The team thinks it may be dehydration. Thirteen is worried how they will hide the condition from the patient. Foreman pretends that Thirteen's guess of a blind uterus is a stupid idea. The parents come in and House tries to defer them to his team, but they think it's a blind uterus too. House orders an MRI, even though he thinks it is a waste of time.

Thirteen and Taub do the MRI. They discuss the "breakup". They rule out the blind uterus theory.

Kutner comes to tell Wilson that House is not arguing with the patient's parents. Wilson thinks House is just in a good mood and tells Kutner not to worry.

Next, Thirteen and Taub do a procedure where they inject saline into the urethra to look for narrow spots with a scope. The patient starts to feel tightness in his chest and has trouble breathing. Its a pericardial effusion.

They drain the fluid and the patient stabilizes. Kutner wonders why House isn't making fun of the team's guesses. Thirteen thinks it is the patient's testosterone supplements. House orders corticosteroids in case it is autoimmune and a drug to block the testosterone.

Wilson comes in to see Cuddy because House is being nice. Cuddy denies having sex with House and tells Wilson not to worry.

Thirteen talks to the patient about his basketball. The patient says his mom made him join the team. He says he wanted to take dance lessons, but his mom wouldn't let him. Thirteen notices the patient's palm is red, which means the diagnosis they have is wrong.

Cuddy comes in to tell Wilson that House is in a good mood, but she's worried.

Kutner and Foreman talk about the "breakup". Kutner is obsessed with her promiscuous bisexuality.

Wilson and Cuddy go to confront House, but he appears to be asleep. However, it turns out he is barely alive and not breathing. Foreman manages to resuscitate him by twisting his nipples. Cuddy asks him what is going on.

Cuddy examines House and can't find anything obviously wrong. He asks for the patient's test results and says he probably took too much Vicodin. However, no one remembers him taking any Vicodin. House orders an environmental scan. Wilson thinks House is on heroin or at least some narcotic stronger than Vicodin because he is not favoring his bad leg.

Foreman and Thirteen do the environmental scan and Foreman asks if Thirteen is sleeping with anyone else. She says she's not, but wonders why he wants to know. Foreman admits it's because Kutner brought it up. However, they figure out that Taub and Kutner have figured it out or, more likely, House told them and has decided not to fire them.

Thirteen finds a poem - the patient appears to be suicidal and confused. However, House doesn't think its medically relevant. They do find toxoplasmosis in his water bottle and treat him for it with antibiotics.

Thirteen confronts the patient's parents about the note. The parents argue about whether to tell him or not. The mother tells Thirteen to re-start the testosterone.

Kutner admits to Foreman he's the one who figured it out, and House didn't tell him. Foreman wonders why House didn't figure it out. He calls Wilson and tells him House is on heroin, but Wilson is having dinner with him. House turns down alcohol. He realizes that Wilson thinks that he's on heroin. House downs the shot to show Wilson he's wrong.

Thirteen gives the patient more testosterone. She tells the patients they aren't vitamins, and tells him to ask his parents.

House goes outside and Wilson catches him throwing up. House admits he's on methadone. He denies detoxing or something to help his pain - he's looking to eliminate his pain. His leg has stopped hurting.

The parents complain to Cuddy about Thirteen. However, Cuddy refuses to remove her from the case unless House is also removed. Cuddy tells Thirteen she better not abandon the patient now as she's probably the only person he will trust.

The parents break the news to the patient. He's angry with them and tells them to leave.

Cuddy finds House in the bathroom and tells him she knows about the methadone. He tells her it's none of her business. She tells him he can't do methadone and work at her hospital. He decides to quit.

House shaves off his beard.

Foreman tells the team he's now in charge because House isn't at work. The team starts a new differential and Foreman orders proton-pump inhibitors. If they don't work, it's scleraderma. Foreman talks to Thirteen about her blaming herself for breaking up the family and tells her it wasn't her fault.

Wilson goes to House's apartment and finds a woman there. She was just hired to watch him sleep. Wilson finds a neat apartment, that House has shaved and that's he's picking out a tie. He's going to St. Sebastian's Hospital to look for a new job.

The proton pump inhibitors don't work and they realize it is scleraderma and that the patient needs steroids, but it also means he doesn't have long to live. The mother confronts Thirteen about not being able to see her son, but Cuddy defends Thirteen and tells the mother to go and see him. Thirteen thanks Cuddy, but she says she didn't do it for her.

Wilson thinks they may have been wrong about House, but Cuddy is convinced the methadone will eventually kill him.

Foreman and Thirteen are getting ready for work again. The patient is responding to the steroids, but Thirteen isn't pleased with the news. Foreman tells her to be honest with him. Thirteen wonders why the patient's AST improved so fast and they realize it isn't scleraderma.

House goes to Cuddy for his letter of recommendation, but instead he finds a methadone treatment schedule and an offer of his job back. He asks for terms that Cuddy refuses, but he agrees to start working there again. He thanks Cuddy and leaves.

He goes to see his team. Thirteen comes in with the news it's not scleraderma. House takes off his tie. House asks if the kid likes energy drinks. He goes to see the patient. He only had dehydration, but the energy drinks put strain on his kidneys which made him slower to rebound. He would have recovered with normal treatment. When they did the MRI on the parents' request, the contrast material wasn't filtered by the kidneys and diffused through his body, causing all of his other symptoms. He just needs dialysis and he will be fine.

Thirteen goes to see the patient and is pleased he is talking to his parents.

Cuddy goes to see House in his office. He tells her that he's going off methadone because he did a procedure that made the patient sick because he was under the influence of the drug. Cuddy confronts him, but House wonders why she cares if he's happy. He throws away the methadone and limps out of his office.

The patient complains of pain in one arm and both legs when he puts pressure on them. He demonstrates by poking himself with his right index finger and grimacing in pain. House twists his right index finger to make him really scream. It is the patient's finger that hurts because it is probably broken. This is actually a reference to a very popular blond joke. House puts on a splint and Cuddy sees the patient thank House when he leaves.