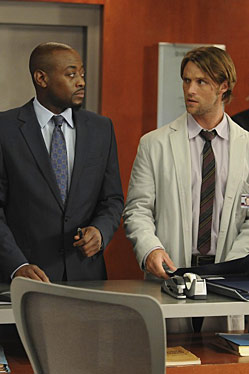 Dibala: "Inject my IV with an air bubble. I will have another heart attack. No one will know… You tell my colonel I’m a sick dying old man who can’t be trusted… You were trying to put a gun in his hand and point it at my head. The gun is now in your hand, that is a practical difference, not a moral one. If you want me dead, then pull the trigger. It is not so easy when you have to do it yourself."
Cameron: "I guess I didn’t want you dead."
―The Tyrant

The Tyrant is a sixth season episode of House which first aired on October 5th, 2009. When a controversial African politician (guest star James Earl Jones) falls ill, he is brought to Princeton Plainsboro for treatment. The team struggles with whether to help a merciless dictator being sued in the United States for crimes against humanity in his country. Meanwhile, Wilson tries to make peace with a feuding neighbor, but House’s prying exacerbates the problem.

After an African dictator is served with a human rights lawsuit, he immediately starts vomitting blood.

Dibala is transferred to Princeton-Plainsboro Teaching Hospital to be treated by Eric Foreman. However, with Thirteen having been fired and Taub having resigned, he convinces Lisa Cuddy to assign Robert Chase and Allison Cameron to his team until he can find replacements. Cameron objects to having to treat Dibala, but Cuddy notes that he is a guest of the American government and the United Nations and they have been told to extend every courtesy.

Foreman is trying to explain to Chase why he had to fire Thirteen. They discuss the possibility of hemorrhagic ulcers in the lungs. The old team returns to Foreman's office to find House waiting for them. However, he is still waiting for his license to be reinstated. Dibala thought it was poisoning, but an environmental scan was negative. They also rule out acid reflux. Foreman thinks it is malaria. House accuses them of rushing to a diagnosis so they don't have to deal with him. House thinks it is dioxin poisoning, because it fits the symptoms. Foreman orders treatment for it.

Dibala wants to know if they are sure it is dioxin, but they admit they are not sure. Dibala talks to Chase about his Australian background and British education.

Foreman and House talk to Cuddy about House returning. Foreman objects, but Cuddy tells him to let House in on differentials, but House can‘t do procedures or have any contact with the patient.

Foreman goes to Thirteen about firing her to tell her House is coming back and she can have her job back if she wants it. However, she doesn't want it any more because she thinks Foreman wants to break up with her.

Chase goes to do clinic duty, but the "patient" begs him not to treat Dibala. Chase says he can't discuss the case, but the visitor presses on, telling him about the genocide. Chase apologizes and leaves.

House goes home to speak to Wilson. He wants to know why Wilson isn't using garlic or wearing shoes. He realizes he's doing it not to bug his downstairs neighbor. House wants to deal with him, but Wilson tells him not to because he‘s on the condo board. Cameron calls House to let her know Dibala is having a heart attack.

House comes back with a diagnosis of Lassa fever, however, it isn't endemic to his part of Africa. Dioxin poisoning has also been ruled out. However, House argues that Dibala’s visit to Egypt would put him in contact with people who did have it. Foreman agrees to treat him for it.

Although Dibala's aide is angry, Dibala is more patient. He sees Thirteen outside the room and figures out she‘s Foreman‘s girlfriend. She tells Foreman she has a job interview and she realized he set it up. She agrees to go to dinner with him.

House meets the neighbor in the lobby of Wilson's building. The neighbor has a hook where his right hand would be. He complains about the noise House's cane. House starts off as a wise guy, but soon becomes conciliatory. However, the neighbor still threatens him.

Dibala has found someone who has had Lassa fever and wants them to take her blood to make serum for treatment. Cameron refuses, but the woman insists on the procedure. However, it's obvious she's being coerced. Cuddy orders Cameron to do it - the woman’s family is probably being threatened.

Chase sees the man from the clinic walking through the hospital dressed as an orderly and calls out. He hears shots, but finds that Dibala's security team has subdued him, although some of the equipment is damaged. However, he notices Dibala's right eye is bloody despite the fact the assassin didn't injure him.

Chase treats the assassin, who admits he lied to him in the clinic. However, instead of being the victim of a death squad, he was part of a death squad and he can no longer live with himself.

The bloody eye was from an enlarged lymph node. House isn't participating in the diagnosis, but makes noises or faces and prompts Chase in pantomime whenever they suggest anything. Foreman still doesn't think it's infection, but asks House to talk. Foreman thinks it is lymphoma. However, Dibala’s LDH is normal, but Foreman puts that down to Dibala‘s excellent liver function. Foreman orders a lymph node biopsy. When House leaves, he asks Foreman to close the blinds. When he does the words “Lyphoma - TADA!!” appear.

Wilson is talking to House about talking to the neighbor. However, House tells Wilson that the patient wasn't in Vietnam - he's too young and he has private medical insurance. He figures that they can blackmail him. Wilson tells him to apologize in writing and leave it at his door. He tells him it's hard to be nice to people you hate.

Dibala thanks Chase for saving his life. Chase asks if he was really preparing a massacre. Dibala tells him about what the rebels have done. He tells Chase he is estranged from his youngest son, who now attends Princeton University. He accuses the men he hired to run his Youth Labor League of causing all the abuse without his authority or knowledge.

House goes to drop off the letter, but the maid opens the door just as he's about to. Instead of going in, he drops the letter, then slips on the floor, spilling the pail the maid was using. He goes inside to mop up. He drops off the letter inside. He sees a Canadian flag on the wall - more proof the neighbor wasn't in Vietnam.

Chase and Cameron argue about whether Chase should have stopped the assassin. Cameron says she's fine with the patient dying. However, she rules out lymphoma.

House confronts the neighbor. The neighbour accuses House of breaking in and threatens to send him to jail. House tells him that faking a medal is a crime too. The neighbor tells him he was in Vietnam with the Canadian Armed Forces for a peacekeeping mission and was crippled when he tried to save a young boy. He now suffers permanent pain as a result of his injury. House apologizes and leaves.

They inform Dibala that the biopsy was negative for lympoma, but they realize he's suffering from short term memory loss.

Foreman takes Thirteen to dinner and tells them that Chase and Cameron are enjoying themselves. Thirteen tells him that instead of firing her he could have stepped aside, or let Chase or Cameron be in charge. Thirteen says she's having trouble understanding Foreman, and he says he thinks he made the right decision firing her. She leaves.

Cameron agrees with Dibala's military aide that Dibala is not mentally competent, and this may be the start of a downward decline. He also starts spiking a fever.

House thinks it might be scleroderma. However, Dibala has a fever and nodules on his fingers. Foreman thinks it is an infection. Foreman orders treatment for blastomycosis.

Cameron goes to treat Dibala and she realizes that he realized she told the military aide he couldn't be trusted. He has lost trust in her and thinks she is trying to kill him and tells her to go ahead and do it. She injects the intravenous line, but it's just medication. Chase tells Dibala not to touch Cameron again. Dibala tells him she's too weak to act on her own beliefs. He accuses his aides of the same weakness. Chase asks about the genocide. He says he will do whatever it takes to protect his country.

Wilson finds out House entered the neighbor's apartment. Wilson had to kick House out in order to placate the neighbor and keep him from pressing charges.

Cameron wants to do the blood test to confirm scleraderma. Chase agrees to get the sample. The test is positive, but they can't convince Foreman to change the treatment. Cameron asks if Foreman has told Thirteen he was wrong to fire her. When Foreman says he hasn't, she reminds him that he often retrenches instead of admitting when he's wrong. He agrees to switch to steroids.

House manages to sedate and tie up the neighbor. He tells him that he knows about his phantom pain and painkillers. He gets the neighbor to put his hand in a box. It has a mirror that makes it look like he has both hands. He tells him to clench both fists and let go. It's obvious the pain has disappeared. The neighbor breaks down and thanks House.

Dibala's oxygen stats go down. They find a bleed in his lungs and cauterize it. However, he has a dozen other bleeds into his lungs. They try to defibrilate him, but they can't get his heart started again.

Foreman is in his office despondent and House tries to console him. He‘s still not sure if the patient died because he switched the meds or didn‘t give him steroids in time. However, they can't do their own autopsy because the body is going back to his home country. House suggests they break into the morgue. Foreman tells him there is an armed guard. Foreman finds out from the log book that Chase was in the morgue before the test and Foreman asks him why. He thinks Chase took blood from a dead scleraderma patient. Chase admits it and says he couldn't bear having him live. Things are actually getting better in Dibala‘s country. If they tell the truth, Dibala becomes a martyr. Foreman tells him he can't cover for Chase. Chase only asks that Foreman warn him so he can say goodbye to Cameron.

House returns to Wilson's apartment. Wilson notes the neighbor now sounds happy and has approved Wilson's garden expansion. He won't press charges, and doesn't want House to move out. He asks House what he did. House agrees to tell him, but Wilson doesn't want to know.

Dibala's son comes to visit his father. Chase goes to bed with Cameron. Foreman burns the morgue sign in log.

Neither of the conditions which were part of the final differential is particularly rare, although both are difficult to diagnose as their symptoms mimick many common conditions.