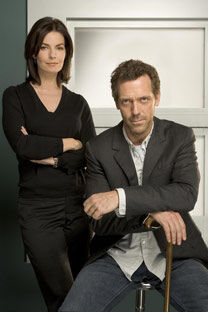 Three Stories is the 21st episode of the First Season of House. It is easily the most honored episode of the series to date, winning the Emmy for Outstanding Writing in a Drama Series for its writer, David Shore, in in 2005 and a Humanitas Prize in 2006 - the top honor a television show can obtain, given to award outstanding writing promoting humanity, dignity and freedom.

Cuddy wants House to deliver a lecture to the medical students on diagnostics, and House finally agrees when she lets him off of clinic duty for a couple of hours. On the way to the lecture, he finds his ex-girlfriend coming to see him to ask him to treat her husband. After refusing, he heads to the lecture where one of the cases he presents starts to look very familiar.

Cuddy calls House to her office and assigns him to serve as a substitute for an ailing professor. He protests, but then reluctantly agrees to give a lecture on the topic of diagnostics in exchange for Cuddy absolving him of two hours of clinic duty.

On his way to the lecture, Stacy Warner appears, and she makes a request for House to take on the case of her husband Mark. House glances at Mark's file and determines it isn't worth his time, as nothing seems to be seriously wrong with him. When Stacy persists, House admits that he's not sure he wants Mark to live if he is sick. He tells her it’s good to see her again and leaves.

At the lecture hall, House is speaking to an audience of perhaps a few dozen medical students, only two of whom initially appear to be engaged in his talk. He grills the students on what they would do in various clinical situations and drifts the lecture to the introduction of three (presumably real) case scenarios in which each patient has presented with leg pain. House notes that, statistically, leg pain is most frequently muscular-skeletal, the result of trauma from an accident, or varicose veins from pregnancy. He begins a detailing of the three case studies in which the only symptom is leg pain.

(Note: In this episode, the composition and dimension of events are manipulated to conform to the arc of House's lecture.)

The first case is that of a middle-aged farmer, whose leg started hurting while he was fixing his fence. The pain originates in his ankle and radiates upward. House interrogates the students as to their next steps and after they make a few suggestions, he tells them the patient has died during all the tests. He stresses to them the priority of getting an actual visualization of a sore leg upon presentation, as opposed to just jumping straight to testing and possibly wasting time and patient comfort.

The farmer's examination shows a puncture wound, leading the students to conclude that it is a snake bite. Foreman and Chase are shown searching the farmer's property for poisonous snakes, and they find one in his field - a timber rattlesnake. The farmer is given anti-venom for this particular species of snake, but he has an allergic reaction to it and goes into anaphylactic shock. While this is successfully reversed with adrenaline, he continues to get worse. However, House notices the snake the wrangler caught had too much venom in its sac to have bitten the farmer. One student proposes looking for other snakes, but House states that there are only two other venomous snakes in New Jersey and that if the snake that bit the farmer is not a native, the man will die while waiting for it to be properly identified. The students absorb House's point that either viable choice--to attempt further treatment with or without proper species identification--could kill the patient. House himself had decided to give the farmer the other anti-venom, but his condition still worsened.

The farmer's puncture wound expands into a massive sore. Now the patient has to be told that he is dying. House tells the students how good Wilson is at breaking this kind of news - glibly remarking that patients actually thank him. However, when the farmer is given this news, his only thought is about his dog. House asks the students if they were ever taught that a patient's response can be an effective diagnostic tool. House realizes the genuine source of the farmer's flesh-eaten injury as a dog bite, alleging that the dog has bitten others and that the farmer just wanted to protect his pet from being destroyed. The dog's saliva was full of opportunistic bacteria, harmless to the dog because of it's immune system but extremely damaging to its owner, giving him Necrotizing fasciitis. The farmer's leg now may require amputation.

During a break from the lecture, House discusses Stacy with Wilson. Wilson reminds House that Stacy loves him but can't stand being around him, and House's students remind him that break time is over.

Zebra Factor 8/10 - Fasciitis is very rare, and is often misdiagnosed as a result. If often has to be well advanced (to the point where amputation is needed) before a diagnosis is obvious, and is often mistaken for more common infections that are less agressive, such as staphylococcus

The second case is that of a volleyball player who suffered an acute attack of leg pain during game practice. Although the coach thought the pain was from a pulled muscle, it is really caused by tendonitis. House warns the doctors not to care about the patient too much. Dr. Cameron insists on performing a full workup and finds a nodule. While the nodule is likely unimportant, its presence together with signs of clinical depression requires the team to thoroughly test the patient with an expensive, invasive and painful procedure. The patient responds to the anti-inflammatory drugs she's given. A thyroid test reveals she also has a thyroid condition--but she didn't respond to treatment for it, and in fact gets worse. The patient also becomes ultrasensitive to touch, which indicates an adenoma, but doesn‘t tell them where. After first scanning the area of the thyroid gland, Cameron scans the leg around the nodule in the leg and finds a cancerous adenoma. The adenoma must be removed even if it means amputation. Although her diseases are unrelated, the thoroughness of the examination allows the source of her leg pain to be swiftly detected and treated.

Zebra Factor 2/10 - Cancerous adenomas are not terribly rare, although most are benign.

Several dozen more seats in the lecture hall are now filled, and House's team starts to show up as well.

The third case is disguised by saying the patient was Carmen Electra, who complained of pain after playing golf. However, the patient soon morphs into another middle aged man. The patient has decreased reflexes and is complaining about a lot of pain. House gets a painkiller, but while asking the students whether it is safe to inject a patient without a medical history, the patient grabs the syringe and injects himself - drug seeking behavior.

Later, the patient returns to the hospital complaining about more pain. House points out that even drug addicts get sick. In order to confirm that the patient is really in pain, the doctor orders a catheterization without anesthetic, saying that if the patient can handle the catheter for half an hour he is really sick and isn't seeking drugs. It soon turns out the patient has blood in his urine, which has turned tea-colored. House explains that this is the result of blood and waste products accumulating in the urine. He then asks the class for a possible diagnosis. House becomes angrier with each answer until Dr. Cameron guesses "muscle death". The dying muscle releases myoglobins which poison the kidneys. The doctors didn't realize this for three days, at which point the patient suggested it. Cuddy tells him they may have to remove the leg. The leg had a clotted aneurysm which led to an infarction.

It becomes apparent that "Carmen Electra"'s case is actually Dr. House describing his own experience. He refuses the amputation. Cuddy tries to talk him into it, but House goes for a bypass despite the risk that the dying muscle will both put him in pain, poison his organs from the return of the dead muscle tissue to his bloodstream, and have him risk cardiac arrest because of the extra potassium that will also enter his bloodstream when circulation is restored. Stacy, his girlfriend at the time, thinks he is an idiot for not going with the safe course.

They schedule surgery to break up the clot, and it goes well. However, House is in terrible pain and wants more morphine even though he‘s at the maximum dose. Cuddy tells Stacy that House could either recover almost fully, or could have leg pain the rest of his life. Cuddy suggests a middle course - cutting out the dead muscle. Meanwhile, House tries to save himself from a cardiac arrest by telling the nurse to give him a dose of calcium glucinate. He goes into cardiac arrest and is clinically dead for almost a minute.

Stacy pleads with House to agree to the amputation. House sticks to his guns, but Stacy reminds him he browbeats patients who make the wrong choice all the time. He realizes the pain might kill him, so he asks Stacy to have him put in an induced coma. He appoints Stacy to be his medical proxy while he is unconscious. It is obvious that Stacy is going to go against House's wishes when he is out. While he is unconscious, Stacy agrees to the operation to remove his dead leg muscle.

Because of the removal of the leg muscle, the patient has reduced use of his leg and because of the delay in diagnosis, he is in chronic pain.

Zebra Factor 10/10 - Any form of muscle death is incredibly rare, and although infarctions are common, infarctions in the arteries of the leg are also rare.

At the end of the lecture, the hall is standing-room-only when Dr. Cuddy arrives and notes that the lecture has gone 20 minutes over time without anyone noticing. He also diagnoses the doctor who couldn't make the lecture - the mug he's been using has been made with lead-based paint.

After the lecture House calls Stacy and agrees to see her husband the following morning.