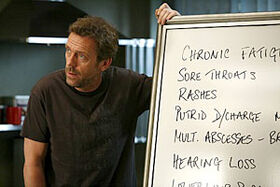 Top Secret is a third season episode of House which first aired on March 27, 2007. Cuddy assigns a patient to House who House has just seen in a dream.

House is having a dream about being in combat during the Desert Storm conflict and being treated for his wounds by a soldier. His right leg is missing below the knee. When he wakes up, Cuddy is there with a file - an ex-Marine who believes he has Gulf War syndrome. House opens the file and sees a picture of the soldier he saw in the dream. Cuddy asks if he knows him, and House says he's never seen him before in his life.

House meets Wilson in the washroom to discuss his dream. House reveals he isn't urinating.

House discusses the patient with his team. He has fatigue, intermittent rashes, sore joints and sore throats. Foreman agrees with House - there is no such thing as Gulf War syndrome, but Chase believes it may be possible. Cameron sides with Foreman and Chase gives in. House thinks the patient is a malingerer looking for a disability pension. He orders a full physical, blood tests and a medical history including whether he's ever been on television. House gives an excuse for why he wants to know.

The patient is angry because the doctors don't believe he's fatigued. He starts describing his symptoms. He wants to know what is wrong with him.

The team meet to discuss possible diagnoses. House asks if the patient has done any modelling, but they didn't ask. The patient isn't currently showing symptoms. House orders more tests, including checking the patient's sleep patterns, a Lexus/Nexus search and a credit check. House is still having trouble urinating.

The patient is sleeping well. Cameron goes to leave but Chase wants to stay or House will complain. He lets her leave, but she agrees to stay too. She suggests having sex, but Chase thinks there is no place private. They wind up going into a nearby room and covering up the closed circuit camera.

Meanwhile, Foreman comes to the patient's room and finds Cameron and Chase missing and the patient awake and complaining about smells. Foreman finds the source in the patient's mouth.

House is in the bath reviewing the patient's file and taking more Vicodin. He gets a phone call from Chase - the patient has bacterial vaginosis in his mouth. However, the patient hasn't had sex in over a year. Foreman thinks it is cancer, and House agrees to let Wilson biopsy the salivary gland. He also tells Chase to find out more about the patient's sexual history.

Wilson does the biopsy and reassures the patient, but he believes it may already be too late.

The team wonders if House is wasting their time. Foreman is wondering where Chase and Cameron were when he found the patient alone. Cameron admits they were having sex, but Foreman thinks it's a joke. Chase is insulted that Foreman doesn't believe her.

Wilson tells House the biopsy is inconclusive. House needs a new prescription for Vicodin. He asks House if he remembers where he met the patient. House tells Wilson he hasn't urinated in three days. Wilson tells him to stop taking Vicodin, but when he realizes House isn't lying, he writes a new prescription.

Wilson is doing more tests on the patient when he realizes that the patient is unresponsive. He goes and finds House still not being able to urinate. Wilson tells House the patient has six brain tumors and has lost his hearing.

However, the tumors grew in a week - House doesn't think that the tumors could grow that fast. Cameron and Chase report that everything they checked out is true. Wilson realizes House has used his team to find out where he previously saw the patient. Wilson takes over the case.

Wilson gets ready to drill into the patient's head. However, Foreman is looking at the portable image and the tumors are now missing.

House lists all the symptoms on the whiteboard. Cameron thinks it is an infection, but that wouldn't explain the disease moving around. Although the patient's urine shows exposure to radioactivity, there isn't enough to damage the spinal cord. House still can't urinate and asks for Wilson's car so he can drive home without using his motorcycle. House wants to leave the hospital, claiming he needs sleep.

The patient's paralysis is persisting and he is afraid he is going to die. The team discusses whether they should try to treat the patient for radiation sickness despite what House said.

Meanwhile, House is at home using a catheter to drain his bladder.

The team starts treating the patient for radiation sickness. All of a sudden, the patient realizes the paralysis is spreading upwards.

House is trying to sleep, but can't. After six hours of tossing and turning, he returns to the hospital. He finds Chase and Foreman sleeping in the doctor's lounge. The team discusses the new symptom, but House is furious they treated him for radiation sickness. House still wants a better medical history. The team is paged by Cuddy who wants to know about the patient's treatment. House realizes the patient is suffering from internal bleeding and needs a transfusion. Chase finds urine on the floor, but it is from a bag under House's pants leg. House wonders what the fuss is. Foreman tells House he is bleeding and Cuddy starts acting nice to House. House wakes up and realizes he has been dreaming.

However, House goes to the hospital and finds Chase and Foreman in the lounge sleeping. House knows about some new symptoms. He has realized that the patient has suffered from hereditary hemorrhagic telangiectasia. The clue was his grandfather's nosebleeds and the patient has had his nose cauterized to stop his own nosebleeds. The symptoms of the disease are often dismissed as minor problems, but are the results of the body's capillaries breaking down. However, the condition can be treated.

House is urinating on his own again. Wilson is shocked he catheterized himself. He reminds House the spasm in his urinary sphincter was probably caused by the Vicodin.

House goes to Cuddy and tells her he now remembers where he met the patient - he was making out with Cuddy at a hospital fund raiser. He chides her for not telling him in the first place. Cuddy thinks House remembered him only because he made out with Cuddy. Cuddy tells him to get over her.

Chase and Cameron are making out in a supply room when House comes in and finds them.

A patient is discussing her sex life with House and drinking from a large bottle of water. He gets upset when she keeps sloshing her bottle of water around. She tells House she has OCD, but her only symptom is water drinking. He tells her she has diabetes insipidus caused by hitting her head on a balance beam - she has characteristics common among gymnasts. He tells her she only needs hormone supplements.