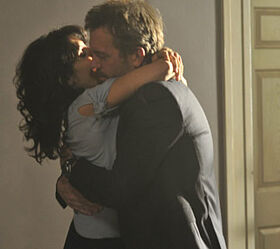 Under My Skin is a fifth season episode of House which aired on May 4, 2009.

House and the team take on the case of a ballerina (guest star Jamie Tisdale) whose lungs collapse in the middle of a performance. When the treatment causes her skin to fall off, the dancer faces not only the prospect of never dancing again but also of dying an agonizing death. The team must use their imaginations to carefully choreograph ways to test and treat her delicate body without killing her. Meanwhile, House continues to suffer from what he thinks is insomnia, and he is willing to go to desperate measures to cure it. Upon realizing that his Vicodin addiction may be what's causing his hallucinations, he asks Cuddy to help him go through the painful detox. The experience leads the two to end up kissing passionately as the episode comes to a close.

A ballet dancer's back goes out during a lift and he drops the ballerina. All of a sudden, she can't breathe.

House is at home listening to the Amber hallucination play the ukelele. He accuses her of trying to kill Chase and she says it must have been his idea. There is a knock at the door - it's Foreman telling him they have a case. House wants to take a personal day, but Foreman tells him Cuddy will fire him.

The team describes the case and the lack of obvious problems with the lungs. House starts disagreeing with Amber deliberately. However, he finally gives in and suggests dehydration from the exertion of ballet.

Chase and Cameron are having dinner at home when she blurts out she saved her dead husband's sperm. Now she wants to keep it.

Wilson is trying to tell House his hallucinations might not be sleep apnea, but he blows him off and tries to sleep in the sleep lab. However, Amber is still there the next morning. Foreman comes in to say the patient hasn't improved and House suggests the equivalent of waterboarding to test her lungs because she can't tolerate any other test. House then hands Wilson a list of possible diagnoses for his insomnia and hallucinations. They decide to test for infections.

They explain the procedure to the patient, who is terrified. They perform a tracheotomy to add liquid to her lungs and when Taub goes to hold her he notes that her skin has come away.

They start performing skin grafts as the patient is losing her skin rapidly. House wants to do an ultrasound and puts the skin loss down to the antibiotics they gave her.

House tells Wilson the patient has toxic epidermal necrolosis. Wilson tells him not to blame himself, but Amber reminds him he's not like other doctors and shouldn't have made the mistake. House suggests that he should apologize to the patient to see his own reaction to see if he has suffered brain damage. He goes to see the patient. They have found what appears to be liver cancer, but she's more worried about dancing again. Amber wants House to mock her, but instead House tells her it's his fault for giving her antibiotics before confirming an infection. The patient and her boyfriend thank him.

House wonders if a biopsy has been done to confirm cancer, but her skin is too weak to do one - she would bleed from the biopsy site. House tells them to come into the liver through the hepatic vein so she will bleed back into her bloodstream. Foreman notices that House appears to be checking with Wilson on every decision, but House denies it. He tells Wilson that he felt nothing when he apologized to the patient - he thinks he is suffering from multiple sclerosis. Wilson suggests a lumbar puncture to confirm.

Foreman and Chase do the biopsy. They discuss Cameron keeping her dead husband's sperm. Foreman tells him to agree to let her keep it because otherwise he can never leave Cameron. All of a sudden the patient starts to crash.

However, the liver biopsy is negative for cancer. They start a new differential, and Foreman wonders why Wilson is sticking around. He figures out that House wants Wilson there to make sure he doesn't screw up. House throws out Wilson. Amber tells House that he doesn't have multiple sclerosis, but that leaves only Vicodin and severe mental illness as possible diagnoses. All of a sudden, House suggests inducing a cardiac arrest on the patient so they can get a proper MRI.

House lets it slip to Wilson that a female is the hallucination and finally admits to Wilson that it's Amber. Wilson confirms that he doesn't have multiple sclerosis as the LP was negative, but tells him his Vicodin levels are too high. House wants to try electroshock therapy, but Wilson disuades him because of the possibility of damaging his mind.

The team induces a cardiac arrest to do the MRI.

House calls Wilson to suggest he try insulin shock therapy to deal with the mental illness and hallucinations. He tells Wilson to get up there right away because he's going to try it anyway.

The team starts to find something, but it's clear they have to re-start the patient's heart so they stop the scan. They go over three minutes, but keep trying to resuscitate the patient.

House injects himself with insulin. He collapses on the floor as Wilson arrives and calls for glucose.

House is recovering as Wilson stands over him. He reminds House he could have died, but Amber appears to have disappeared. House thinks he is all better, but Wilson examines him anyway. Wilson can't find anything wrong and releases him.

They tell House that they saw a shadow on her heart, but they had to interrupt the MRI. However, it could be anything and any test they could run would be dangerous. House goes to see the patient and notices the boyfriend is too devoted. He thinks it might be gonorrhea in an abcess in her heart which wouldn't show up in a blood test for the disease. They decide to check the boyfriend and do surgery if he tests positive.

House goes for a celebration dinner but he gets a phone call (the ring tone being Hanson's MMMBop). The boyfriend has gonorrhea but denies having sex with anyone other than the patient. Foreman tells him they are prepping the patient for surgery. However, House realizes he was just lucky - the boyfriend wasn't showing guilt. All of a sudden, he sees Amber again. He calls Wilson to come and pick him up.

Wilson suggests a rehab facility. They go back to House's place to pack when House gets another phone call. Foreman tells Wilson the patient is septic, but Wilson tells Foreman House is off the case. Wilson tells House the patient is fine, but Amber knows Wilson is lying. However, House realizes rehab won't work - he will cheat as usual.

The team discusses what they can do about the sepsis but everything they suggest won't work. They decide to try dopamine to keep her blood vessels together despite the risks.

House shows up at Cuddy's office and tells her he's going to quit. Cuddy asks him what he really wants but House finally admits he's hallucinating because of the Vicodin. He asks Cuddy to oversee his detox personally - otherwise he will scam someone. Cuddy calls to arrange a babysitter for her daughter.

They take the patient to surgery as Chase tries to remove the abcess. The patient's blood pressure is holding despite the prediction that it won't, but they notice that the patient is losing blood flow to her extremities.

Cuddy is dealing with House's withdrawal symptoms. When she goes to make tea, he catches himself looking for drugs. However, Cuddy has beat him to them. House starts to tell Cuddy about where he has hidden his stashes even though Amber is telling him not to.

They take the patient to recovery and tell her that they removed the abcess but they have to amputate her hands and feet or else gangrene will set in. However, she refuses consent. Foreman wants to quit, but Taub wants to keep working.

House is staring to improve, but sees some Vicodin. Amber tells him to send Cuddy away. Cuddy leaves and House tries to get the pill that is on the bathroom floor. However, Cuddy beats him to it and flushes it down the toilet. House unsuccessfully tries to retrieve it.

Taub wants to try vasodilators to restore circulation to the extremities. Incredibly, it starts to work.

House continues to improve, but he's afraid he won't be able to work because of the pain in his leg. However, Cuddy reminds him that the opiates may actually have made him think he was in more pain than he was. Cuddy reminds him that she hasn't lied to him in 20 years, but that just makes House want to know what she did lie to him about 20 years ago. She finally tells him that he wasn't really in his endocrinology class - she was just auditing. She was there to be closer to House. House realizes Amber is gone.

The patient wants to know where her boyfriend is, but Taub tells her he left.

Chase tells Cameron the patient recovered. However, he also tells her that he can't let her keep her dead husband's sperm. He tells her he has no doubts about being with her, but she thinks he's being naive. He tells her he will wait until she's sure.

The title for this episode comes from the song "I've Got You Under My Skin", written by Cole Porter. It may refer to one or more of the following conflicts within the episode: