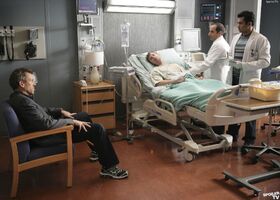 Unfaithful is a fifth season episode of House which first aired on February 16, 2009.

When a priest who runs a homeless shelter sees a bleeding Jesus hovering at his doorstep, he is admitted to the ER. House takes on the case as a distraction for the team while he confronts Foreman and Thirteen about their relationship. The team soon learns the priest had been involved in a molestation scandal that caused him to lose his faith. However, just as they are about to dismiss his case, the patient’s condition takes a drastic turn for the worse, and House grapples with his past and his beliefs.

A priest at a mission is tidying up when he hears a knock at the door. It's a homeless man looking for a warmer coat. The priest finds him one and sends him on his way. He retires to his room for a smoke and a drink and after a few, he hears more knocking. He goes to the door to find a figure who looks like a bleeding Jesus suspended in mid air.

House comes to work and Cuddy asks him to come to her baby's naming ceremony. House is unenthusiastic and tries to blow her off. Cameron finds him looking for cases in the emergency room. He finds the case of the priest. Cameron thinks it is a hallucination caused by alcohol or exhaustion. She thinks House wants the case to screw with someone.

House's team jumps to the same conclusion - alcohol. They think House is screwing with them or the patient. He orders tests for epilepsy and tumors, as well as an environmental scan. He then tells Thirteen and Foreman they either have to break up or quit. He gives them until the end of the case to decide.

House berates Wilson for going to the naming ceremony. Wilson tells House that he should show up.

Thirteen and Foreman discuss their options. Thirteen wonders why Foreman wants to keep working for House. He figures that House is screwing with them. Foreman plans on not doing anything.

House decides the case is over and when Thirteen and Foreman fail to comply, House fires Foreman. He sends Thirteen to find another case.

Taub and Kutner go to discharge the patient. He is now complaining about nausea and numbness in his left foot. Kutner examines him and finds that the patient's toe has fallen off.

Foreman and Thirteen discuss their options again. Foreman thinks he should look for a new job. Thirteen offers to quit too, but Foreman reassures her. Thirteen's pager goes off.

Kutner and Taub do the environmental scan and discuss Foreman and Thirteen's relationship.

House runs into Cuddy in the elevator. He figures that Cuddy is pressuring him to attend to keep him away. House thinks she's a religious hypocrite. Cuddy tells him she's sincere. He tells her he wouldn't miss it for the world. Cuddy goes to confront Wilson about how the plan backfired because House is now coming.

Kutner and Taub talk to Thirteen about the relationship. All of a sudden the patient tries to break out of the hyperbaric chamber because he can't breathe - he appears to be having a heart attack.

Foreman goes to see Cuddy for a letter of recommendation. She agrees that House should have fired him and won't give him a letter. He realizes he can't get a good job without one.

The patient wasn't having a heart attack. House thinks it might be a clotting disorder and orders an angiogram. He goes to see the patient during the procedure to ask if he's really a virgin. They talk about why he abandoned his faith. They realize he's not feeling pain - it's a neurological disorder.

Wilson asks why House is going to the baby naming ceremony. House realizes that Wilson is working for Cuddy and tells him that he's still going. Wilson wants to know why and House says its because Cuddy is trying to play him.

Thirteen goes to Cameron to ask for a position in the ER. Chase tells Thirteen to break up with Foreman so they can both get their jobs back, but Cameron thinks House is just playing and offers to see if she can't find a job for Thirteen at New York Mercy Hospital.

Kutner tells the patient House likes the patient because they are both atheists, but also wonders if God isn't just testing his faith. Taub finds nerve trauma in the ribs which could explain the patient's symptoms. The patient reports that he has lost sight in his right eye.

The team starts a new differential, but there is nothing physically wrong with the eye. Thirteen talks about autoimmune, cancer and infection, but those have been ruled out. House thinks that the patient is not producing white blood cells and orders them to examine the patient's spleen. Thirteen asks House if he will re-hire Foreman if she goes. House agrees.

House goes to talk to the patient again about his faith. House thinks that the patient hopes he will gain his faith back as quickly as he lost it. House wonders why the patient is still working for the church. The patient thinks that House really wants to have religious belief, but he denies it.

House runs into Cuddy, who admits she doesn't want House at the ceremony. He agrees not to come. She thanks him.

The team discusses whether Thirteen should quit or break up with Foreman. They find the patient only has a few minor infections, but that gets Taub interested.

House and the patient start talking again. Taub comes in to tell House the patient has pneumocystis - a generally harmless infection unless someone has a compromised immune system. House realizes the patient has AIDS.

They break the news to the patient who says it's impossible for him to have AIDS and he refuses the test. He realizes Taub will not believe him. Kutner and Taub discuss with House the ethics about disclosing the AIDS diagnosis to the teenage victim. House reminds Taub that legally he can't disclose the diagnosis and orders them to treat for AIDS despite the risks posed by the anti-retrovirals.

Thirteen tells Foreman she has found a job and he can go back to House. However, they get into an argument.

Taub finds the victim and tells him the priest has AIDS and to get tested. The man thanks him and says he has been tested and it isn't any of Taub's business what the result was.

Foreman comes back to House to ask for his job back. Foreman and Thirteen get into another argument because Thirteen turned down the other job. When House tries to intervene, Foreman tells him to shut up. Thirteen calls Foreman an idiot and leaves. When Foreman doesn't follow, House gives him his job back.

The patient develops another symptom - a patchy rash on his chest.

House thinks it is Hyper IGE Syndrome, also known as Jobs syndrome. However, the patient's IG levels have been tested and are normal. House orders a genetic test.

As Kutner and Taub treat the patient, the victim comes in to see him. The victim apologizes and starts crying.

House is examining the whiteboard when Wilson comes in to ask House to reconsider by giving him a rational reason to go. Wilson discusses the nature of truth and House gets an idea. He starts eliminating symptoms one by one and crosses out hallucinations. He goes to the patient to tell him he has Wiskott-Aldrich Syndrome, an immunosuppression condition that mimics AIDS. It explains all the symptoms except hallucinations, which can be explained by alcohol and exhaustion. It was just a coincidence. House realizes that the patient might be regaining his faith. The patient is just trying to explain how his life turned around in a single day. House says there are rational explanations, but the patient says he realizes that.

Cuddy goes to see Cameron about the case. Cuddy is amazed that House took a case just to stall and not only found that the patient was really sick but found the diagnosis and saved another life. Cameron realizes Cuddy wants House at the naming ceremony. Cameron tells Cuddy to ask House to come to the naming ceremony. Cuddy and House meet at the exit, but House leaves telling her to have fun at the ceremony.

The ceremony goes well. Thirteen and Foreman reconcile. House goes home to have a drink and play the piano. He finds himself playing klezmer.