Sửa đổi
Whatever It Takes 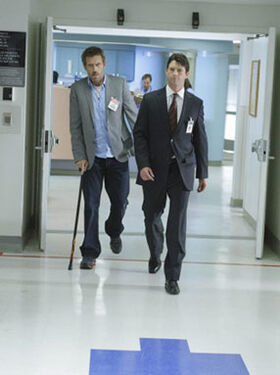 Whatever It Takes is a fourth season episode of House which first aired on November 6, 2007.

An eight-time champion drag racer starts having perceptual difficulties during a race, but wins nevertheless. However, during a post-race interview, she collapses.

House is with his applicants, who are trying to sell him a case. They start talking about the drag racer. However, Foreman thinks it is just heat stroke. At that point, a man in a suit comes in. House tries to get rid of him, but the man recognizes him and asks to speak in private. House tells the applicants to diagnose the drag racer.

The visitor is with the CIA and wants House to work on another case. He tries to convince House it isn't a joke, and he wants House to come with him. House goes back to the applicants. House orders some tests and says he will be back in 45 minutes.

House goes with the "CIA Agent", although he still thinks he is joking until he gets to the roof and finds a helicopter waiting for him.

Brennan and Foreman examine the patient and take a history. Brennan finds her reflexes are abnormal. Foreman thinks otherwise, and still thinks it is heat stroke, but then orders an MRI just to make sure.

House is enjoying the perks on the flight when his cell phone rings. It is Foreman. House "jokes" about being on a mission for the CIA. They start talking diagnoses, but Foreman wants to release her. However, Number 13 reports to Foreman she's had another seizure. This points to Miller-Fisher. The patient doesn't trust Foreman because he thought nothing was wrong. She wants to see House. The patient starts to leave and demands to see House.

House is at another hospital and meets with a beautiful young doctor from the CIA and a famous immunologist from the Mayo Clinic. House asks to see the patient.

Foreman is with the applicants, convincing them how to convince her to take the treatment. Kutner suggests pretending one of them is House. Foreman goes to see the patient again and admits he screwed up. However, the patient has a fever - it isn't Miller-Fisher.

House and the other doctors are discussing the case, but the beautiful doctor is not revealing a lot of information. They come to a very sick patient in an isolation room. He is gaunt and covered with burns, although he was fine a few days before.

Foreman and the applicants start talking other diseases. Taub thinks it is Lupus. Brennan challenges Foreman's conclusion that it is MS. Foreman gives the applicants three hours to run tests.

The CIA patient has been given standard tox scans. House is dismissing the other doctors and keeps pressing the beautiful doctor for more details. House suggests the patient is a drunk and just has pancreatitis, which was then refuted by the two other doctors, saying that the CIA patient is not an alcoholic. They then decide to treat him for radiation poisoning, which would explain the burns.

They talk to the patient and House calls him a liar for not admitting to his drinking and a killer.

The tests on the drag racer all turn out negative, but it could be Lupus or MS. Foreman decides to treat her for MS. Taub and Amber still believes it's lupus, so they run to Cameron. She reminds the applicants House only cares about results. They give her steroids too, but she starts losing feeling in her legs.

The CIA patient seems to be improving with treatment for the radiation sickness. However, House has been treating him for pancreatitis too. However, the patient can't be brought back to consciousness.

Foreman thinks the paralysis is due to the combination of steroids and interferon. However, Brennan thinks it is polio. The rest dismiss him and Foreman kicks him off the case. Foreman decides to treat the patient for botulism.

The other doctor is chiding House, but House shows his hair is intact, when it should be falling out. House thinks it is blood cancer. The beautiful doctor agrees to stop the radiation treatment. House points out to the other doctor that although he's been wrong, the good looking doctor always agrees with him.

Foreman decides to release one of Cameron's patients in retaliation for interfering with his case. Cameron goes to Chase, but he sides with Foreman and tells her to stop interfering with House's cases.

The CIA patient's blood pressure returns to normal. House makes another pass at the beautiful doctor, but she says they have to see an oncologist. House calls Wilson for the latest treatment for the condition. He blows him off, but agrees to "call him back at the CIA". House orders the beautiful doctor a job, but she knows about Foreman, Chase and Cameron. Wilson calls back and is amazed he's at the CIA and gives him the information he needs.

The drag racer's fever is rising despite the botulism treatment. Brennan comes in to see Foreman with the results of the polio test - it's positive.

Cuddy comes to Wilson looking for House. She doesn't believe that House is at the CIA and assigns Wilson extra clinic duty.

The CIA patient's hair starts falling out, but it's too quick for the chemotherapy. House admits the patient doesn't have cancer and someone tried to kill him. The other doctor starts screaming at House - it was radiation sickness. However, House has an idea based on an herbal remedy.

The team discuss what to do about the patient. Brennan suggests massive doses of Vitamin C. When Foreman tries to dismiss him, Brennan challenges him. They start the CIA patient on the experimental treatment. Brennan starts the drag racer on Vitamin C.

The CIA patient starts talking to House about his experiences with a woman. However, what the patient is saying doesn't make a lot of sense: the patient says he attended a 40-day festival, when the festival in Bolivia lasts only 8 days. House goes to the beautiful doctor - he's angry that they told him the patient was in Bolivia: in fact, he was in Brazil. The CIA agent in the room was the culprit. The patient has selenium poisoning from eating too many Brazil Nuts, which are called "Castanhas do Pará" in Brazil (literally translates to "Chestnuts from Para"). House earlier dismissed a diagnosis of horse chestnut poisoning for this reason. House then reveals that he had already started the treatment.

The drag racer starts improving with the treatment.

The other doctor on the CIA case is going on about House's conduct, but in this case the beautiful doctor agrees that being right was what it was all about.

House returns to Princeton-Plainsboro two days later.  Foreman then arrives, announcing to the group that the patient didn't have polio. Foreman thinks it is porphyria. House quickly realizes that Brennan faked both the polio with thallium then the cure with Vitamin C. Brennan says he did it because he's seen the treatment work and they just need to do proper testing. Foreman was right all along about heat stroke. House insists that Brennan quit. He tells Foreman to call the cops after Brennan gets far far away from them because he's obviously nuts. He tells the applicants to listen to Foreman next time he is in charge.

Cuddy confronts House about his absence. He lies about where he was. Cuddy agrees to forgive his hours, but realizes that he was lying again and gives him 24 hours of extra clinic duty.

House goes out to find the beautiful doctor waiting for him - it's about the job he offered.