Tạo lập Wiki
Who's Your Daddy? 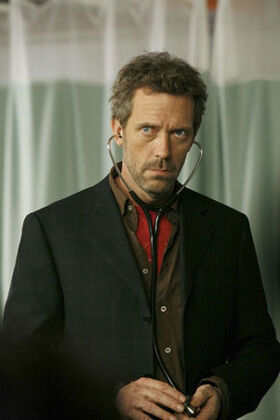 Who's Your Daddy is a second season episode of House which first aired on May 16, 2006.

While on a flight with her newly found father, a girl who survived Hurricane Katrina starts hallucinating that the plane is filling up with water. She then collapses.

House is trying to deal with his leg pain on his day off and starts off the day with Vicodin. He tries to exercise his leg. Just as he's about to inject himself with morphine, Cuddy leaves a message that he has a new case.

The patient has cardiogenic shock, but has not had a heart attack. Cuddy briefs House on the case. There is nothing wrong with her heart, no infection and no drugs. It turns out that the girl's father is an old friend of House. House pretends not to know him, but quickly admits he is putting on the most gullible guy on the planet. He tells House that the girl is the granddaughter of a famous piano player. He tells House how he just found that she was his daughter, but House thinks the girl is lying. He agrees to treat her anyway.

The team does a differential. House decides that it might be an arrhythmia, and he decides to induce one even though it might be dangerous. He also decides to get the proper informed consent himself. He talks his friend into consenting, then admits it's a dangerous test, but still tells him to sign the form. House also suggests a paternity test. His friend feels such a test will show he doesn't trust his daughter.

They proceed to induce an arrhythmia. The patient starts having a heart attack, but doesn't hallucinate. They keep proceeding with the test on House's instructions. She finally starts hallucinating and they freeze the affected muscle in her heart, expecting that will cure the problem.

Cuddy asks House to review her sperm donor candidates. House calls them both losers. Cuddy tells House to find a suitable donor himself.

To diagnose her, they need to destroy her bone marrow and replace it. When her father finds out, he demands a bone marrow test, but still no paternity test. He is afraid that the test will either show he didn't trust her or that she isn't his daughter. Either way, he loses.

Cuddy asks House if he told anyone else she was looking for a sperm donor. He denies it. She just wanted to see if she could ask anyone else to help her. He agrees to help Cuddy with a shot into her gluteus maximus.

Wilson asks House why the patient's father is a friend. House admits that he was only his friend because he had a car. They have found a bone marrow donor for the patient, but while they are irradiating her, she starts leaking stool out of her mouth.

The stool does indicate that it isn't an autoimmune disease. House orders a liver biopsy.

House's friend comes to see him again. House tells him that the patient's liver has failed and her digestive system is running in reverse. House once again confronts his friend about only knowing the patient for a few days.

House calls off the biopsy when he realizes the girl's grandfather on the tape is playing just perfectly, but thinks that the piano is out of tune. They go to see the patient, who's skin is getting darker. This indicates hemochromatosis.

House calls in one of the sperm donors, ostensibly for a job interview. He doesn't come off well in front of Cuddy. House makes his point about not meeting your baby's father.

They start treatment for hemochromatosis, but the patient goes into respiratory arrest. They figure that the chelating agent they gave her may have attached the iron in her lungs to a fungus. However, they can't treat her unless they know what fungus it is.

Cuddy confronts House about the privacy of sperm donors. House confronts Cuddy about accepting sperm from someone she doesn't like.

Cameron tells House that the patient doesn't have the most common fungus, aspergillis. They have to figure out what kind of fungus it is, and they have to ask the patient. She can only communicate through blinking. She admits she lied to his friend. He asks her to write down where she stayed during the flooding. It turns out she was in a recording studio, which is a breeding ground for zygomycosis, which only breeds in very wet conditions - such as flooding of studio sound insulation.

The patient responds to the treatment for zygomycosis. House tells his patient he ran a paternity test and she really is his friend's daughter. However, we see the test, and it shows negative.

A young boy comes in with what appears to be a bright orange rash. House diagnoses that he merely was lying on a bright red couch right after having a bath - it's only dye.