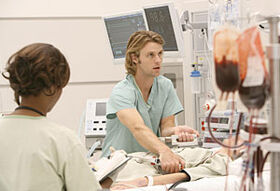 Wilson's Heart is a fourth season episode of House that aired on May 19, 2008, as well as being the final episode of the fourth season. The key to Amber's condition lies in House's damaged memory. However, as House begins to recover his memory, he starts to remember something that could end his friendship with Wilson and change both of their lives forever.

House and Wilson find Amber at nearby Princeton General hospital. Although Amber came through surgery well, just prior to their arrival her heart started racing to 130 beats per minute. House lies about Wilson being Amber's husband so they can take her by ambulance back to PPTH. However, on the trip, she starts fibrillating. Before they defibrilate, Wilson comes up with the idea of lowering her body temperature to keep her racing heart from killing her, giving House more time to come up with a diagnosis. House agrees.

Amber is put into protective hypothermia by Chase and then her heart and lungs are put on bypass. The team starts a differential. They are handicapped by the fact that she is on bypass and they can't test her heart. Kutner suggests that House try to restore his memory, but even House realizes he's in too poor a shape to take drugs to do it.

Taub asks House if there is anything else he should know, like if House was having an affair with Amber. He goes to run a tox screen.

House is in his office trying to think and starts hallucinating (or dreaming). He starts talking to Amber in his dream. He tries to remember what they were doing together the previous night. Amber suggests they were meeting to have an affair, but House suddenly wakes up and realizes electricity will stimulate his brain. He goes to Cuddy, but she's dismissive and Wilson agrees with her. Wilson is comforting Amber by talking to her. House gets a page from his team, but all the tests are negative. However, Kutner found diet pills, which could explain the racing heart. Foreman wants to restart her heart to test it, but House suggests surgery to look at the pulmonary vein directly.

As Amber's condition deteriorates, Thirteen begins to act strangely, which prompts House to confront her about not participating in the differentials. House tells her to get over whatever her problem is so she can do her job.

Just as they are about to start surgery, they find Amber is exhibiting jaundice. The liver failure shows that diet pills aren't responsible, so they return her to intensive care.

House saw Sherry in his dream with Amber, and Kutner remembers that there is a Sherry's Bar near where the bus crashed. Wilson and House go to the bar and the bartender gives House back his keys. House starts asking about Amber, and the bartender tells him that they were drinking together.

Kutner tells Thirteen that he went through what Wilson is facing - his parents were killed in a store robbery when he was very young.

House decides that Amber may have had hepatitis and orders interferon. Foreman goes to tell Wilson and tells House to get some sleep. However, House has another hallucination and Amber starts speaking to him again, telling him that hepatitis can't be the right diagnosis. House wakes up again and tells his team to turn her over. They notice a rash on her back. It indicates that she might have the flu. Wilson is wondering how House saw the rash. Once again House has to confront Thirteen about refusing to do her work. They think it might be Rocky Mountain Spotted Fever, but after they treat her with antibiotics they have to warm her back up to test their theory. Wilson objects. House orders blood cultures, but Foreman objects because treatment would be faster. House overrules him.

House goes to see Thirteen again to see why she is screwing up. He thinks it's because of her refusal to deal with the possibility of having Huntington's disease. He tells her to get over it, but she confronts him about his caution.

Foreman is concerned about Amber and goes to Cuddy. Cuddy goes in and starts warming Amber. Wilson objects vehemently and as he sees a drop in brain function on the EEG, accuses Cuddy and Foreman of letting whatever is wrong with her spread to her brain.

House thinks it might be an autoimmune disease. He wants to give her prednisone and warm her back up. Wilson objects again, but Cuddy tells him he's the family, not the attending. House apologizes to Wilson, but agrees with Cuddy. Wilson eventually comes back to apologize, but asks House to go through deep electrical brain stimulation to attempt to restore his memory. House realizes he will be risking his own life, but agrees.

Chase starts the procedure on House. He remember the bartender taking his keys. He asks for a phone and realizes he's calling Wilson. However, he reached Amber instead. She came to the bar to get him. They argue about leaving, and Amber agrees to stay for one drink. However, House can't see anything wrong with her. House realizes he tried to leave the bar without paying and Amber went back to pay. He forgot his cane and Amber ran onto the bus to return it. Amber sneezes because of the flu. However, House realizes that can't be the whole answer. She reaches for pills - Amantadine. House tells her not to take them, but just after she does, the bus gets in a crash. He realizes that her failed kidneys allowed Amandatine to bind to the proteins in her body. It's too late for dialysis - she's terminal. House then suffers a seizure.

House is in a coma. Foreman explains to the others that House was right about the Amantadine and that after her heart started to fibrilate, it was too late to do anything. She can't qualify for a transplant because all her other organs are damaged.

Wilson wants to call time of death, but Cuddy tells him that Amber would most likely prefer if she was woken up for a few hours so they could say goodbye to each other. Wilson agrees and waits for Amber to regain consciousness. Amber finally wakes up and as Wilson explains the situation, she realizes herself that the Amantadine will soon result in her death. They tell each other that they love each other.

The rest of the team decide that they too will go to say goodbye to Amber. Kutner realizes they don't have to say anything to her - she will just appreciate their being there. Thirteen gives Amber a hug. Amber starts to feel fatigued and realizes her time is short. Wilson wonders why she isn't angry. She says that's not the last feeling she wants to have. Wilson kisses her, and takes her off of bypass.

House is still unresponsive. He hallucinates that he is in a brightly lit bus with Amber. He realizes she's dead. She tells him "everybody dies". He wonders if he is dead, but she tells him he isn't. He thinks that he is the one that should have died. He realizes Wilson is going to hate him. Amber tells him he deserves it, even though Wilson is his best friend. He wants to stay in a coma rather than be in a place where his leg hurts, he's miserable, and Wilson hates him. He decides to get off the bus. He finds himself awake in his hospital bed, Cuddy at his side. She tells him to rest after she confirms he can hear him.

We see the result of Thirteen's test for Huntington's. It is positive. Taub goes back to his wife. Kutner watches television alone. Foreman goes to a bar where he is soon joined by Chase and Cameron.

In the hospital, a red-eyed Wilson visits House while he sleeps. House wakes and the two stare at each other for several moments. Eventually, Wilson leaves the room. He goes home to find a note from Amber that she has gone to pick up House and soon breaks down in tears once again.

The season ends with House's face, and Cuddy still holding his hand in the background fast asleep in a chair beside his hospital bed.