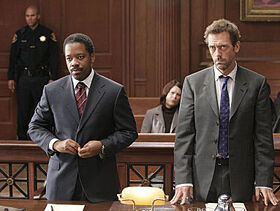 Words and Deeds is a third season episode of House which first aired on January 9, 2007.

A firefighter has to be tackled by his partner to keep him from running into a burning building.

The firefighter is taken to the ER. They note his body temperature is rising and falling. The patient is also recovering from previous skin grafts.

House is busy at a court date, formally pleading not guilty to the drug charges. His lawyer tries to talk him into making a deal because he is facing 10 years in prison.

House comes back to see the team, who are making comments on his court case. Cameron confronts House about his attention to the case. House thinks it might be an infection related to the skin grafts.

Cuddy tells House to speak to Tritter. When House refuses, Cuddy reads the riot act to him. She then gives him some Vicodin.

Cameron takes the patient's blood. The patient notes that everything looks blue. The team starts discussing the new symptom. House thinks it might be male menopause, despite the fact he's only 28. The blue vision is from Viagra. He orders a hormone panel.

The hormone tests show that he lacks testosterone. They put him on supplements. However, although he improves, he starts having abdominal pain. He wants to remove some of his tubes, and attacks Cameron when she tries to stop him.

House goes to see Tritter. House apologizes and blames his behavior on his pain. Tritter thanks House, but doesn't think he is sincere. He tells him he will see House at the hearing.

There is no explanation for the patient's pain or aggression. House goes along with Foreman's suggestion that it might be meningitis. House then leaves to enter rehab.

Cuddy and Wilson are incredulous that House entered rehab voluntarily.

Meanwhile, the team's tests are negative. They discuss new possibilities. Cameron says they have to go back to House, but the team decides to leave him alone.

Chase realizes that the patient may be hiding pain from his skin grafts to keep his job. However, the patient then has a heart attack. They manage to revive him and get him stable. Chase was right - he was having chest pain, which may have caused his aggression. Cameron leaves to see House. She finds him vomitting in the toilet. House makes Cameron realize that his firefighting partner Amy was with him for every attack. They bring her into the patient's room again and the patient has another attack.

They talk to Amy about what might be causing the patient's attacks. They talk about why the patient had skin grafts - he saved Amy when she was trapped under debris.

Wilson goes to visit House. Wilson is optimistic, but House isn't. Wilson tells House he has only been there for two days. Wilson calls House a coward for finding fault in others without looking at himself. House tells Wilson to leave.

They can't find why Amy is causing the attacks. They ask the patient if he is in love with her. He admits he is, but that he hasn't told her how he feels because she is engaged to his brother.

Cameron thinks it broken heart syndrome. They can't figure out what treatment will work for him. Foreman cynically suggests that they wipe out his memories of Amy, but House agrees with that course of action and he goes to Cuddy with the suggestion. She agrees. House wonders if it is because Cuddy feels sorry for him. She says it's because he's acting rationally for the first time in a long time.

They talk to the patient about the treatment. He agrees to it because he knows Amy doesn't love him.

Tritter comes to visit House in rehab. However, he's still not moved. House gets angry with him. Tritter says he doesn't give addicts another chance, and even House's actions are a lie.

The team starts electroshock therapy on the patient. He remembers his name after the treatment, but little else. They let his brother and Amy into the room. He doesn't react negatively, but he doesn't recognize them.

The patient is getting better despite his memory loss. Wilson comes to see House again and brings him a new tie for court. House apologizes to Wilson because he knows that Wilson was trying to do what he thought was best.

However, Cameron finds out that Amy and the patient's brother aren't involved. The memory of it wasn't real.

The hearing proceeds, and Tritter gives testimony about House taking another patient's drugs. The team calls House in court saying that his memories were false. House ignores the judge's instructions to give up his cell phone and makes a smart comment to the judge. He then leaves the courthouse and the judge finds him in contempt.

House thinks the patient's high voice is also caused by female hormones. He thinks the patient has a blood flow problem. They find a spinal meningioma that is blocking blood flow to the brain and causing the false memories. They schedule him for surgery. House then excuses himself so he can go to jail.

House comes back to find Cuddy on the stand. She tells the court that she had the pharmacist substitute placebos for the oxycodone because she was afraid that House would be vulnerable. She has an inventory report to back it up. Tritter accuses her of perjury, but she says she only did it because she didn't expect the matter to go this far. Based on Cuddy's testimony, the judge chastizes House but dismisses the charges, partly on the basis that House must have done something bad to Tritter. However, she orders House incarcerated overnight for leaving the courtroom. Tritter decides to bury the hatchet.

Cameron tells the patient he will be okay as there are people who care about him.

Cuddy and Wilson go to visit House in jail. Cuddy tells him that she will be working him harder. Wilson gives him his withdrawal medication, which he soon figures out are really Vicodin, supplied by the hospital orderly. House tells Wilson that nothing has changed, but Wilson thinks the apology was real.