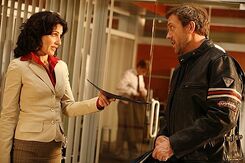 Jasper: "I could be your boyfriend."
Cameron: "I...think that wouldn’t be fair to the girls your own age."
Jasper: " [Chase] seems like a tool."
— Act Your Age

Act Your Age is a 3rd season episode of House which first aired on April 17, 2007. A six year old girl is admitted after collapsing at daycare, but her symptoms seem typical for someone ten times her age. The mystery just keeps getting worse until the girl’s brother also starts exhibiting strange behavior. At that point, the team realizes what’s causing the problem, but as the patients continue to get worse, they can’t determine the source of their illness. Finally, House finds a third person exhibiting unusual symptoms and puts the pieces together. Meanwhile, it appears that Cameron is more upset with Chase than Chase is with her, even though the breakup of their relationship was her idea.

While an 8 year old boy, Jasper is being treated by his father for a severe nosebleed at a post-school day care, his 6 year old sister, Lucy collapses with respiratory distress and is rushed to Princeton-Plainsboro.

Cuddy brings the case to House, who is intrigued about a six-year-old with restrictive pericarditis. However, it’s late in the day. Since House wants nothing more than to go home, he orders his team to run a lot of routine tests and leaves. The team goes to see the operation being carried out on the patient while they argue about the diagnosis. Chase goes home too while Foreman and Cameron run the tests, all of which are negative. However, Chase comes in first thing the following morning with a positive test result from a biopsy taken of the tissue in the pericardium - the girl is suffering from a fungal infection. House orders them to biopsy a lymph node to find out which fungus.

The father tells Chase and Cameron that the children’s mother died about a year ago from brain cancer. As Chase does the lymph node biopsy, her brother develops a crush on Cameron. All of a sudden, they realize the patient has double vision.

However, the biopsy was negative, ruling out a fungal infection. House thinks it might be juvenile rheumatoid arthritis.

House actually received a gift from a patient - a pair of theatre tickets. He offers them to Wilson, but Wilson initially thinks House wants to go to the play with him, until House tells him that men just don’t go to plays together. Wilson accepts the tickets.

As they explain rheumatoid arthritis to the father, the patient starts having a stroke.

They start draining the patient's blood to keep it from clotting. Cameron and Chase arrive at the girl's home to see if the girl's illness may have an environmental cause. They argue about whether Cameron is trying to make Chase jealous by taking flowers from the patient‘s brother. She denies it. Chase discovers that the brother is having discipline problems at school. While there, they discover a bloody undershirt in a vent in the patient's bedroom. Chase reminds Cameron she broke off their relationship. She reminds him he broke the rules by trying to make it a more serious relationhip.

Cameron surmises that the child may be sexually or physically abused, but Foreman notes there are no signs on her body. Cameron thinks it is sexual. House orders a full physical exam, but Chase points out they can't do a vaginal exam without the father's consent. Foreman asks the father straight out if he's abusing his daughter, but he denies it and Foreman gets consent for the examination after threatening to call social services. Cameron performs the exam and finds cuts all over the patient’s vaginal area. However, there is no sign of vaginal tearing. Foreman surmises the blood on the shirt they found might not be the patient’s.

Tests on the shirt come back and show that it is menstrual blood - although the patient is only 6 years old, she has entered puberty. Cameron explains to the father that her hormone levels are too high and they have to find the source. The patient finally starts talking again. The cuts on her vaginal area were from her attempt to shave off her pubic hair. The team gets together to decide what the source is. Cameron thinks it is environmental, but House thinks the patient has a hormone-producing tumor.

Chase and Foreman perform an MRI on the patient. They discuss Cameron breaking up with Chase. They find a bright spot on the patient’s left ovary.

Wilson comes to House to tell him Cuddy sent him flowers with a romantic card attached. When he sees Cuddy, he runs away. As House walks past Cuddy in the clinic, he tells him Wilson is acting a little freaked and admits he sent Wilson the flowers.

They operate to remove the tumor on the patient’s ovary, but she goes into V-Tac from an arrhythmia. They find the "tumor" is just a benign cyst. Cameron feels the hormones have to be from an environmental source.

The patient's brother sees Chase talking sweetly to Cameron and being tender to her, and goes into a rage and bites Chase. When they report the biting incident to House, he first brushes it off and goes back to watching professional wrestling on television. However, seconds later he calls Cameron back with to tell her that the girl's illness and the boy's aggressiveness are probably from the same common disorder.

The brother's testosterone test shows levels a hundred times higher than normal. The question then becomes what the source of the testosterone is. Everything Cameron got from the home tested out negative. Chase pointed out the mother died of a tumor. Since they are siblings, a genetic cause is considered. They start draining blood from the brother as well. Suddenly the sister's stomach starts to hurt - she has a cyst on her pancreas causing the pain, and the scans show other cysts that weren‘t there two days before. It could be environmental, but she's getting worse even though she's not in her usual environment. Cameron thinks the sister needs to have her pituitary gland removed because a pituitary adenoma is most likely the cause of the symptoms. However, she would need hormone treatment for the rest of her life. The father consents to the surgery. At this point House wonders if there could be another environmental source, and suspects the day care center. However, the father rejects this suggestion, saying if any other children there had the same symptoms, he would know about it. House wonders how he would have known about any other cases at the day care when he hasn’t been outside the hospital in four days.

House visits the day care and, after asking one of the girls there if she's "growing hair in her special place", realizes that the father is having an affair with the day care supervisor. She denies ever being to the patients' house (she claims that Jasper and Lucy just lost their mother, so they thought it was too soon to let them know) but House realizes that she has recently had a lip wax. House quickly surmises that she had been exposed to testosterone as well, and that the source has to be the father. He returns to the hospital and confronts the father about whether he has been using testosterone cream to keep up with the much younger supervisor. He confirms it, and admits he had no prescription, but can't understand how his use of the cream would affect his children - he keeps it at his gym. House explains that like most other things, testosterone is taken out of the body through sweat, and that his children were exposed every time he touched them, even in the hospital. He agrees to stop using it.

Wilson is wondering what to say to Cuddy about the card she sent. He tells House that he’s going to go to her office and just kiss her. House agrees with the plan. Wilson goes to leave the office, and then turns back and lets House know that he knows that House sent him the flowers. After they play games with each other for a minute, Wilson makes it clear that he’s not interested in Cuddy and that House is a jerk for letting him say he was going to go kiss Cuddy.

Cameron finds flowers from Chase above her locker and thanks him for them. However, she says she doesn’t want a relationship. Chase says he knows that, but he also knows she likes flowers.

The family goes to leave the hospital, and the father has invited the day care supervisor to accompany them out of the hospital. Cuddy and House discuss the pros and cons of dating people outside your age group, and even trying to form a relationship. House then tells Cuddy he has tickets to a play.

The patient says he is urinating a lot, has aches, and has trouble concentrating. However, he refuses to provide a urine sample because he is bladder shy. He offers to go home to get a sample.

Precocious puberty is a rare condition, but it can also be caused by exposure to topical testosterone crème. There are cases where children under the age of three have developed secondary sexual characteristics after such exposure.

Retrieved from "https://house.fandom.com/wiki/Act_Your_Age?oldid=56741"
Community content is available under CC-BY-SA unless otherwise noted.