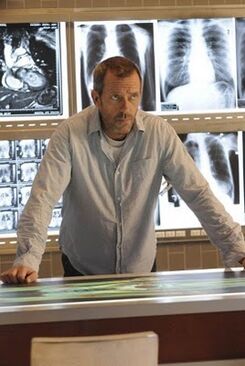 House: "It’s cool. My theory is that her body was able to kill off the parasite, but what it couldn’t do was get rid of the shell, which doesn’t show up on the scans. That little piece of microscopic garbage set off an allergic reaction called cerebellar schistosomiasis delayed hypersensitivity allergy or kz-t-haha. Risky, unpleasant treatment, but completely curable."
Artie: "Well that’s fantastic!"
House: "You’d think so wouldn’t you. Only thing is, did you ever have sex with your son’s girlfriend?"
— Black Hole

"Black Hole" is a 6th season episode of House which first aired on March 15, 2010. It was directed by Greg Yaitanes and written by Lawrence Kaplow.

The team treats a teenage girl and, when all else fails, they resort to an experimental technique to get inside her mind. Meanwhile, Wilson and House deal with furnishing their apartment and Taub deals with issues in his marriage.

A young couple is at a class in a planetarium when pink material starts oozing out of the woman's mouth and her companion realizes she isn't breathing.

Meanwhile, House is enjoying cereal for breakfast when Wilson asks him to use napkins. They discuss who is going to get a kitchen table and House accuses Wilson of being afraid of trying to furnish an apartment without having a wife do it.

The team discusses the case, having ruled out the obvious possibilities. However, Taub hasn't arrived yet. Foreman thinks it might be binge drinking and when House agrees, Chase agrees to run the tests.

Taub and his wife are having an argument about not doing things together anymore. She tells him to leave, but it's obvious she's not fine with him going to work.

Taub comes in to find the boyfriend and his father trying to find her. Taub tells them about the alcohol use, but the boyfriend insists she doesn’t drink that much. The boyfriend asks Taub to tell the patient that he loves her.

Taub passes the message off to the patient from the boyfriend while they prepare her for an MRI. Taub talks to Chase about his marital problems. Suddenly, they see something on the scan near a heart valve. Thirteen suggests a transesophageal echocardiogram but it might give the patient a heart attack. House tells them they have no better alternative and to keep a crash cart handy.

Thirteen and Taub talk about his relationship while they do the transesophageal echocardiogram. Although everything looks fine, the patient starts dissecting and they stop the procedure. However, her blood pressure and heart rate haven't changed. They do surgery to treat the dissection, but they have trouble getting her heart started with the defibrillator. They finally manage it by direct cardiac massage.

They can't explain the dissection, but Thirteen suggests an allergy to something the patient may have inside her. They ask for a sample of the boyfriend's semen. He denies ever having unprotected sex, but admits that he did once the night before her symptoms appeared. They do an allergy scratch test. The patient starts complaining that her stomach hurts and they note blood in her urine. There was no allergic reaction, but her kidneys are failing. House rules out a number of possibilities until Chase suggests cancer. Foreman suggests a full body scan and House agrees.

Taub discusses his problems with Foreman while they do the scan.

House comes back to Wilson's condo to find it has been fully furnished, and it's been done well too.

The patient is complaining about how long the full body scan is taking, and then starts hallucinating that there is an earthquake, and then that she is being drawn into a black hole.

Foreman says that the combination of symptoms points to a vascular problem, particularly an aneurysm. House starts texting Taub's wife and wants to know what she was hallucinating about because he thinks her subconscious is trying to tell them something. He wants to run a cognitive pattern recognition program. However, he allows Foreman to do an MRA with contrast.

Wilson comes back from jogging to find the condo empty of furniture. He tracks down House in the cafeteria. House tells him he returned it because he found out he had rented it from checking Wilson’s log of phone calls. Wilson agrees to hire a decorator, a male if House wants it. House insists he go to buy one piece himself.

The patient wakes up to find her boyfriend there. However, she starts having trouble understanding him (he proposes marriage but she can't understand what he's saying), and then starts hallucinating again. This time, the hallucination takes the form of what appears to be the patient at about age 8. The younger version of herself, in a very sinister manner, says that the patient has a secret and that it is killing her, it then says that she deserves to die. Although she doesn't remember the content of the hallucination, this is an obvious reference to the secret she is keeping with regards the sexual encounter with the father. This could also represent her subconscious putting the pieces together. She then calls for help and then has a seizure.

The MRA was normal. Thirteen thinks that the area of the brain that can account for out of body experiences may be affected, but all the scans of it were normal. House still wants to know what the patient experienced during her hallucinations. He wants to continue with the cognitive pattern recognition program as he sees no other alternative. The rest of the team thinks it's science fiction.

Rachel comes to the hospital to see Taub so they can go out together.

Foreman explains the procedure to the patient. He tells her it's risky, but they have no other alternative.

Meanwhile, Taub and his wife are making out in his car. However, House comes to interrupt him.

The patient goes through the initial set of images to calibrate the computer mapping of her brain. They test her and when she thinks of her boyfriend playing baseball, a rough image of a baseball pitcher appears on the screen. Everyone except Foreman is impressed.

Wilson goes furniture shopping. He's not getting any help from the staff. He starts trying things out. He finally learns he has mistaken a patio table for a dining room table.

They test the patient's subconscious, but nothing interesting appears to be appearing except the stars, moon and sky. A picture of her father appears, but he died in a plane crash. House realizes that it hasn't been of any help.

Thirteen thinks it is a liver problem, but it wouldn't explain the dissection. Foreman thinks the calcified pineal gland might be hiding a tumor. House orders an MRI to look.

Wilson admits to Cuddy that he can't pick out furniture. Cuddy admits she knows he grabbed the condo she wanted and tells him to hire a decorator.

House is reviewing the video of the pattern cognition when Foreman comes in to tell him the MRI was normal. The tests point to an allergy, but they have ruled it out. Foreman suggests a Middle Eastern parasite but House says it can’t be - the tests were clean and the patient never been to the Middle East. House admits he is stumped and they may only find the answer at the autopsy.

House starts reviewing the scans again. Taub comes in to ask if he can leave, and House asks him if he's having an affair. He denies it and House asks if it's because the women are now young enough to be his daughter. Suddenly, he realizes the man in the patient's dream wasn't her father, but the boyfriend's father.

He goes to the boyfriend's father and asks him if he travels. He admits that he does. House tells him he thinks that he may have given the patient a parasite. He believes her immune system fought off the parasite, but it left behind a shell which she was allergic to. Then he asks the father if he ever slept with the patient because that's the only way she could have got it and the treatment is dangerous. The boyfriend walks in and the father admits he did sleep with the patient during one of their breakups because she was upset and he was drunk.

House comes home to find the condo fully furnished. He realized that Wilson used a decorator and Wilson admits it. However, House finds one thing Wilson picked out - a Hammond organ. House loves it, says he is pleased by the way it reflects on Wilson and eventually starts playing "Whiter Shade of Pale".

They start treating the patient. The father tries to talk things out with the his son. Taub is going through his wedding album with his wife when he suddenly re-proposes to her. She accepts.

Taub talks to the boyfriend and tells him that cheating doesn't mean she doesn't love him. He goes to talk to her. House asks him if his wife said yes, and Taub tells him that she did. House is pleased, but then sees Taub flirting with one of the nurses. The patient and her boyfriend make up.

The title of this episode refers to a region of space where a collapsed star has formed a gravity field from which nothing can escape. They were first theorized in 1931 by Subrahmanyan Chandrasekhar and have subsequently been confirmed by indirect observation. The patient is being taught about them (though she isn't paying attention) at the beginning of the episode.

Schistosomiasis and its related illnesses are almost unheard of in the United States, although they are endemic to Egypt. In a patient with no history of travel, it is nearly impossible.

Male Announcer: Did we mention watching a new Fringe on FOX? Watch it now!

Episode review and media at daemonstv

Review of the medicine at politedissent

Retrieved from "https://house.fandom.com/wiki/Black_Hole?oldid=56965"
Community content is available under CC-BY-SA unless otherwise noted.