This article is about the young patient in the episode Occam's Razor for the artist with visual distortion, see Brandon

Brandon Merrell was the patient in the episode Occam's Razor. 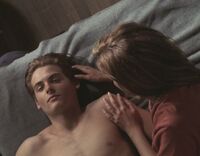 Brandon was brought into the emergency room after he collapsed after having sex. His girlfriend noted that before he collapsed he was complaining of a cough and nausea and had a rash on his abdomen.

The patient's girlfriend admitted to Dr. Chase that they had engaged in rough sex before he collapsed, but Dr. Chase dismissed this as a cause for the patient's symptoms.

Dr. Foreman believed it might be a virus. He also noted from the patient's tests that the patient's blood pressure had fallen further, there was fluid in his lungs, and his creatinine was rising - indications of kidney failure.

Dr. House added kidney failure to the list of symptoms, but Dr. Foreman put it down to the antibiotics. Dr. Foreman suggested that the low blood pressure was causing the abdominal pain - a viral heart infection was causing a lack of blood to the intestines, causing the pain. Although the presentation is very rare, it explained many of the symptoms except the cough and rash. Dr. House reviewed the previous differential diagnoses and circled the symptoms they cause. However, Dr. House noted a sinus infection combined with hypothyroidism would account for all the symptoms. He ordered the team to treat for both conditions and Dr. 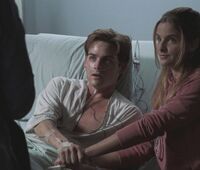 Cameron carried out the treatment. However, Dr. Foreman doubted that the patient had two independent conditions and went to test for viral infections. Dr. Cameron and Dr. Chase agreed to assist.

The virus tests turned out negative. Dr. House found the team in the lab and ordered them to spin the patient's urine. Dr. Foreman performed the test and discovered the kidney failure was the result of acute interstitial nephritis, which could not be caused by antibiotics. In addition, the patient was beginning to improve with treatment.

The patient was feeling better, but was still suffering from a cough. Foreman decided to test the patient's thyroid, but the TSH T3 and T4 were negative for hypothyroidism. Dr. House noted that given the patient's improvement the test could be wrong. Dr. Foreman argued that if it was a virus, the antibiotics for the sinus infection would affect the patient's liver and kidneys, leaving him unable to fight off a virus. Dr. House ordered a white blood cell count which, if it was normal, would rule out a virus.

The tests showed that the white blood cell count had fallen to nearly nothing and the patient was immunocompromised. The patient was moved to a clean room.

Dr. Foreman performed a bone marrow biopsy in an attempt to find a virus or fibrosis. 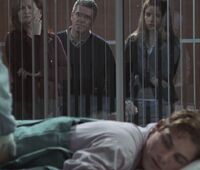 While obtaining a prescription of Vicodin for his own use, Dr. House asked Dr. Wilson what the patient's first symptom was - it was the cough. Dr. House eventually realized that an overdose of Colchicine, that suppresses the body's ability to duplicate cells, would account for each of the symptoms except the cough. However, if the patient was given colchicine by mistake when he was given a prescription for cough medicine, that would explain why the rest of the symptoms followed the cough. However, Dr. Cameron pointed out that he could not have gotten colchicine while he was in the hospital because they were monitoring everything he received and his condition improved before he got worse. However, Dr. House got the patient's mother to admit she gave the patient the cough medicine after he started to get better because he still had a sore throat and cough. However, all the pills were gone. Dr. Chase went to the original pharmacy, but the patient's mother confirmed that the pills provided by the pharmacist were identical to the pills the patient took - it was cough medicine.

Dr. House believed the cough medicine may have reacted with the patient's underlying condition. However, lymphoma had been ruled out. The only choice appeared to be exploratory surgery despite the patient's weakened condition. The team started to prepare the patient for surgery. However, he went into cardiac arrest 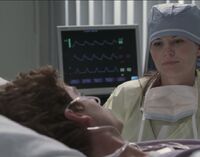 during prep which meant the surgery had to be postponed even though the patient was restored to normal sinus rhythm.

Dr. Cameron reported to Dr. House that the patient now had pain in his fingers. She believed it was from an infection, but Dr. House noted that this would be the next symptom of colchicine poisoning. The next symptom is hair loss, and he was clearly starting to lose his hair. Dr. House got the patient to admit he took ecstacy, which could have been adulterated with colchine. Dr. House ordered fab fragments for the colchine poisoning and Acetaminophen for the pain of having his hair pulled out. The patient improved rapidly with treatment.

Brandon presents with a rash, fever, abdominal pain, coughing and low blood pressure that isn't responding to intravenous fluids. However, his complete blood count was normal and there was nothing on a CT Scan of the abdomen. As no condition appears to cause all these symptoms, House realizes that he must get the blood pressure under control or the patient will die before they can diagnose him. He orders treatment for sepsis - broad spectrum antibiotics along with a cortisol stimulation test and an echocardiogram.

However, Brandon's blood pressure keeps dropping, fluid starts filling his lungs and his creatinine levels start to go up, all indications of kidney failure. They have to discontinue the antibiotics. Foreman believes that the abdominal pain could be linked to a circulatory problem caused by a viral heart infection. However, that wouldn't lead to a cough or rash. However, House realizes that all the symptoms could be caused by two conditions - a sinus infection and hypothyroidism. He orders treatment for both. However, Foreman is not convinced and starts running tests for viral infections. House learns about it and asks Foreman to keep him updated.

Foreman's tests show that the kidney failure wasn't caused by the antibiotics. However, Brandon starts to improve on treatment. Although his cough persists, the rash starts to disappear and his fever is gone. However, later tests rule out hypothyroidism. The next test indicates his white blood cell count is low and dropping rapidly, meaning his immune system isn't working and he must be moved to a clean room.

After Brandon is moved to the clean room, Foreman performs a bone marrow biopsy. However, House realizes that if the cough is eliminated as a symptom, the symptoms, including immunosuppression, indicate the use of colchicine, a medication for gout. Brandon had seen a doctor for his cough and had been prescribed medication, and a pharmacy mix-up could explain why he was taking colchicine. However, if wouldn't explain why he got worse once he was admitted. However, House confronted the patient's mother, who admitted giving him one of the pills prescribed by the other doctor after he was admitted. However, all the pills were gone.

Dr. Chase checked with the dispensing pharmacist, who determined he had not been given colchicine.

At this point House is stumped. Wilson suggests exploratory surgery, but House realizes that's highly risky. He decides to go through with it anyway, but it has to be canceled when the patient reacts badly to a procedure to check his pulmonary arteries.

However, Brandon develops pain in his fingers. That's also a symptom of colchicine poisoning. House tests his theory and finds Brandon's hair is also coming out in clumps, another symptom of colchicine. He prescribes fab binding antigens. Brandon starts to improve. The diagnosis is confirmed when Brandon sees a new order of his cough prescription and realizes the pills are different.

This article was the featured article for January, 2021