Start a Wiki
watch 01:38
The Loop (TV)
Do you like this video?
Brave Heart 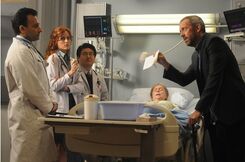 House: "Did [Dr. Cuddy] tell you how to stop me?"
Singh: "Look, I’m asking you as an adult to please stop."
House: "Well, that obviously didn’t come from her, but fair enough."
— Brave Heart

Brave Heart is a 6th season episode of House which aired on October 19th 2009. The team takes on the case of a reckless police detective who has a family history of sudden heart failure that killed his father, grandfather and great-grandfather all at age 40. Though House is not keen on diagnosing the patient without any detectable symptoms, the team, urged by Cameron, attempts to identify his condition so the detective can live without fear of dying young. Meanwhile, Chase is haunted by his actions in the Dibala case, and, Cuddy informs House that in order to get his medical license back, he will need to take medical students for rounds and he tries to get out of doing this. He may have an excuse after all when, after moving into Amber’s old room, he starts hearing things.

While chasing a freerunner, a police detective suffers a terrible fall and lands on the pavement below. He is taken to the Princeton-Plainsboro emergency room and is assigned to Cameron. He only has a couple of broken bones and wants to be released. His partner says he is reckless because he thinks he is going to die by the age of 40, just like his father and grandfather. Cameron says she knows a doctor who can find something wrong if there is something to find.

Wilson walks in on House in the living room where House is playing with his toys of love, thinking he was doing something private. Wilson says he's going to set up a bed for him so they can both have some privacy.

Cameron brings the patient's case to House saying he's a genetic time bomb. House dismisses it as a coincidence and thinks Cameron only wants to take him because he's a single lonely guy. He doesn't want to take the case, but Foreman is still in charge so orders a battery of heart tests. However, Chase is still feeling panicky over his incident with President Dibala and makes an excuse not to be with the patient.

They find nothing wrong with the patient, so Foreman exhumes the body of the father, grandfather and great-grandfather for examination of their DNA. Chase admits he's afraid of having a panic attack whenever he's around the ICU. Foreman tells him to confide in Cameron.

House is having trouble sleeping in the new room, which used to be Amber's study because he hears noises. He checks on Wilson but just manages to wake him up.

The DNA checks on the corpses don't show any conditions that could cause a premature heart attack. House has gone to complete his rounds. Foreman orders a test of the son's DNA by taking a bone marrow biopsy.

The son comes in but doesn't want to undergo the biopsy. Cameron tells the mother he has to tell the son about his father.

House goes on rounds where a student says a patient should be released, but the patient‘s monitor suddenly sounds an alarm. The students rush to help, but was only House pushing on the test button. The supervising doctor asks him to act like an adult. However, instead House pulls out the patient's urine tube, allowing it to spill all over the floor. He intimidates the supervisor into signing off on the paperwork.

The girlfriend breaks the news about the son to the patient, but he doesn't want to meet the son. He finally agrees to do so, and all the son wants is to do things with him, but the patient doesn't want him to get attached because he thinks he's going to die. He sends the boy out of the room.

The genetic tests are all fine. Chase is still distracted. House wants to discharge the patient, but Cameron resists. House insists he can get the patient to relax and stop worrying.

House goes to see the patient and lies to him, telling him he has “Ortoli syndrome“. Chase tells him its rare and is related to the adrenal gland. House prescribes Nabasynth twice a day for a week and tells him the technology to detect the problem wasn't around when his dad died.

House goes back to his room at Wilson's but is still uneasy. He turns the light on suddenly, but all he sees is pictures of Amber. House thinks he hears voices, but finds Foreman pounding on Wilson's door. Foreman tells him the patient collapsed and died four hours after they discharged him.

Cameron wakes up early and finds Chase getting ready to visit the patient's girlfriend to tell her face to face about the patient's death. Cameron asks if he's okay because she put down Chase's strange behavior to the Dibala mortality and morbidity conference. He says he's fine and that he would tell her otherwise. They tell each other that they love each other.

Foreman goes to start the autopsy with House in attendance. House wants to assist, but Foreman won't let him because he still isn't licensed. Foreman starts the Y-incision, and notices that the patient is bleeding, which he shouldn't be. All of a sudden, the patient screams and gasps. House says the autopsy will have to wait.

Despite the gasping, the patient's blood pressure dropped back down again and he once again lost consciousness. This and the bradycardia mimicked death. House wants to ignore the heart because it didn't help them. Foreman thinks it might be autoimmune, so House starts him on steroids.

The patient is conscious and only remembers being in his laundry room, nothing after the collapse. He complains about having a sore jaw and realizes House was wrong about “Ortoli syndrome”.

House is having his hearing tested to see why he might be hearing things, but the tests are normal. The doctor suggests if he’s hearing things he isn’t supposed to he might have to speak to a brain specialist. House goes to Cuddy to tell her he might still not be ready to return to practice.

The patient is complaining his jaw still hurts, but he has been given the maximum dose of painkillers. The patient gets out of bed and finds a pair of forceps to extract his sore tooth and rips it out of his mouth.

A dentist assessed the tooth and could find nothing wrong with it. Foreman tells the rest of the team that House isn't coming back soon. Foreman thinks it might be bone cancer causing a paraneoplastic syndrome. Foreman decides to scan for a tumor.

House goes back to his room, but is still uneasy. He still thinks he hears something. He searches the room for the source of the whispering - the sound is travelling through an air vent. House checks out Wilson and finally realizes it was just Wilson talking to himself as if he was still talking to Amber.

House admits to Wilson he's been hallucinating - he's been hearing whispers and is going back to Mayfield Psychiatric Hospital. Wilson agrees. House tells him he knows it was Wilson whispering and Wilson said he knew House was just screwing with him. However, he also says talking to Amber makes him feel better than talking to House.

House comes back to work and goes back on rounds. However, Cuddy is there and wants to know why he keeps changing his mind. She asks to speak to him in the hall and they start arguing. One of the students realizes that they are hot for each other.

Bone cancer has been ruled out, and Chase is AWOL. Foreman and Cameron aren't talking to each other, so House goes to leave. However, House comes up with an idea - hereditary sensory autonomic neuropathy type 1, a miscommunication between nerves. It would explain the bradycardia and why he thought he had tooth pain. Cameron goes to start the medication, but House goes to get Chase to do it.

House finds Chase sleeping in the lounge. He tells him to go and administer the medication to the patient no matter how much it scares him. Chase goes and asks the patient if he's ever killed anyone. He hadn't, but he notes that his fellow police officers have had widely differing reactions to it. All of a sudden, the patient loses control of his bowel movements. Chase stops the medication.

Chase goes to confession. When Chase tries to justify his actions, the priest counters that it's just as bad if a doctor kills his patient. The priest refuses absolution until Chase takes legal responsibility for his actions. However, Chase realizes that he will go to jail if he does that and refuses because he felt he did the right thing.

He goes to the patient and tells him he's not going to die. He's realized that the patient has an aneurysm in his brain stem. It’s been pressing on nerves, explaining all his symptoms. It's also been getting bigger, threatening to stop the signal from his brain to his heart. He tells the patient that they will be cutting into his brain and the brain of his son. He also realizes the patient's reckless behavior is just due to the fact he doesn't want to be tied down.

Chase comes home to find Cameron reporting him as missing. Chase is drunk and Cameron wants to know what he's hiding. Chase says he just needed to be wasted and is fine now he moves to hug her but Cameron walks away.

Brain aneurysms are quite common. An estimated 1 in 50 people have them. However, the type of hereditary aneurysms depicted, and it's accompanying symptoms, are an extraordinarily rare presentation.

Retrieved from "https://house.fandom.com/wiki/Brave_Heart?oldid=57611"
Community content is available under CC-BY-SA unless otherwise noted.