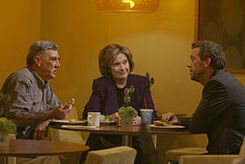 "They seem perfectly pleasant, don't they? They are. He was a Marine pilot, she was a housewife. Married 47 years. They had one child. Mom is just like everyone else, nice enough, no great sense of humor, hates confrontation. My dad's just like you [Cameron]. Not the caring ‘til your eyes pop out part, just the insane moral compass that won't let you lie to anyone about anything. It's a great quality for boy scouts and police witnesses. Crappy quality for a dad."
―Daddy's Boy

Daddy's Boy is a 2nd season episode of House which first aired on November 8, 2005. A twenty two year old who is having the sensation of being severely shocked has a strained relationship with his father which makes it hard for the team to diagnose him. Meanwhile, House tries to avoid a dinner with his father and mother.

The night before his graduation ceremony from Princeton University, Carnell Hall has dinner with father. He then goes to a party where he drinks heavily. During the party, he feels as if he is receiving severe electric shocks in his back. He then collapses on the floor with a seizure.

After Carnell is treated for a week, Wilson forces House to take the case by reminding him that he owes Wilson $5,000. House goes through a number of routine diagnoses that Wilson has already eliminated. House hands the case over to his team with only the instruction "something's missing".

The team goes to take a medical history and Carnell admits to some minor drug use. The medical history itself doesn't give them any clues. They argue about what it might be, but Dr. Chase reminds them that all that information is in the chart, and House must want something else.

Meanwhile, House is showing what he did with the $5,000 - he has bought a motorcycle. He also talks Wilson into taking him to dinner that Thursday. The team comes to report, but when they tell him they couldn't find anything new, he revs the engine. He then tells them to check the accident report on how Carnell's mother died. He tells his team that he suspects the cause is genetic.

The team checks for abnormal growths of the cranial nerves. However, when they reveal to Carnell that his mother died in a car accident and the team feels his condition may be related, he learns for the first time that his mother didn't die at the hands of a drunk driver - his father lied to him to get him to behave. Meanwhile, Carnell loses control of his bowels without realizing it. They check his legs, but he still has feeling in them, it was only his sphincter that seemed to be paralyzed.

The sphincter paralysis sets the team thinking again, because it means House's original diagnosis is clearly wrong. While the team is deliberating, House takes a phone call that turns out to be his mother. He says he is busy the Thursday night she and House's father will be in town en route to Europe. Foreman thinks it might be molecular mimicry and the go to test for it.

The team wonders about what type of parents House must have had to turn out the way they did. Cameron goes to Wilson to talk about House skipping meeting his parents to have dinner with him. Wilson is a little preoccupied as he tells Cameron he has lent House substantial amounts of money four times. When Cameron finds out Wilson is not meeting House on Thursday for anything important, she suggests Wilson invite House's parents to dinner too.

Foreman explains molecular mimicry to Carnell and his father. When Carnell is alone with the doctors away from his father, he admits to the team he went to Jamaica without his father's permission. However, the team can't see that this information helps them. The team does suggest that if he smoked marijuana, he might have pesticide poisoning despite no real evidence to support this conclusion. House orders treatment over Foreman's objections.

When House learns Wilson invited his parents to dinner, he is furious. He offers to pay back Wilson the money if he calls off the dinner. Wilson agrees. At this point, House admits to Wilson that he has been borrowing increasing amounts of money from Wilson to find out how far he would go. House pays Wilson back the $5,000 but Wilson refuses to call off the dinner date, telling House he has been telling successively larger lies to see how far he could go before House drew the line. Wilson suggests that if House doesn't want to see his parents, he should tell them himself.

Cuddy is furious that House treated Carnell without confirming the diagnosis. However, when she goes to see him, it appears he is responding to treatment for poisoning - his appetite has returned, the shocks are less frequent and his sphincter paralysis has gone away. House starts to gloat, but Carnell is soon in distress again and House has no idea why.

Carnell is now exhibiting chills and a fever, but House has no idea why. The team suspects an infection. The sphincter paralysis has returned. It appears to the team that the infection isn't related to the original disease, but it the result of the patient being immunocompromised. House orders antibiotics, more tests, and interviews of the people Carnell went to Jamaica with.

Meanwhile, the team talks about whether they want to meet House's parents on Thursday. Cameron goes to find out who Carnell went to Jamaica with. The father refuses to leave the room, so Carnell admits he went to Jamaica.

Cameron goes to visit one of Carnell's friends, who admits headaches and nausea from drinking but is also exhibiting a rash around his groin. Cameron insists on looking at it and suggests he come to the hospital, but the friend refuses. Cameron comes back and describes the rash as being similar to a diaper rash. House suggests lying to the friend that the rash is life-threatening to get him to the hospital. Cameron consults with Cuddy to see if the lie would be unethical. She agrees it would be, and suggests to Cameron she lie to House that his parents are coming in early. Meanwhile, Carnell's symptoms become worse as he starts bleeding into his abdomen. He gets emergency surgery, but the bleeding colon shows the antibiotics aren't working.

However, lying to the friend (or to House) becomes a moot issue as the friend is admitted to emergency vomiting blood. House suspects an STD, but the friend denies having sex with Carnell. He then reveals that Carnell's father owns a scrap metal yard, not a construction company. Carnell's father lied about his occupation figuring his son would get better treatment. House finds out that Carnell received a piece of old sculpted metal from his father that he uses as a good luck charm. House orders his team to get Carnell's bureau from his home. They find the "charm" is highly radioactive - it was a piece of radioactive metal used to test wells (boreholes). Radioactive sources of this type are used in oil prospecting and mining; this practice is called borehole logging.

The team realizes the radioactivity has destroyed Carnell's immune system. The others exposed will need transfusions. However, Carnell has had much more exposure and needs a bone marrow transplant. A tumor in Carnell's spinal cord is causing the shocks and neurology symptoms. It can't be removed without great risk to Carnell due to his immunocompromised state, but it will most likely kill him if it is not removed. He is removed to an isolation room.

Meanwhile, House's parents show up. House once again tries to get out of seeing them, but agrees to eat with them in the cafeteria. On the way, they meet Cameron and invite her, but she realizes House doesn't want her along and declines.

Carnell undergoes surgery, and the tumor is removed. However, after the surgery, Carnell starts hemorrhaging.

House tries to make conversation with his parents. His father admonishes him for not realizing how lucky he is. His mother tells him he's absolutely perfect just the way he is.

Chase goes to Carnell's father, who is receiving a transfusion. He tells him that they removed the tumor, but that Carnell is not going to be able to fight off the infections. He will keep getting perforations in his intestines that will bleed and eventually cause his death.

Cameron visits House to tell him about the patients. House confides in Cameron that his father has an "insane moral compass" that won't let him lie about anything, which made him a terrible father.

Carnell's father goes to visit his son, and tells him he will be fine, although he knows otherwise and Carnell is doubtful himself.

Radiation sickness is not terribly rare, affecting many industries including scrap metal disposal yards (which often have radiological detectors), and people who work in nuclear facilities. It is a particular concern in the medical field (including dentistry) as many medical professionals and their patients are often exposed to radiation on a frequent basis, either through scanners (X-rays, CT Scans), the use of radioactive isotopes (for diagnosis and treatment) or radiation therapy machines (which give patients very large, but controlled, doses to deal with cancer and autoimmune disorders).

Exposure to ionizing radiation (Alpha, Beta, Gamma, X-Ray, UV etc.) is very dangerous, but there are three things to keep in mind when its unavoidable:

Retrieved from "https://house.fandom.com/wiki/Daddy%27s_Boy?oldid=57303"
Community content is available under CC-BY-SA unless otherwise noted.