Start a Wiki
watch 01:50
The Loop (TV)
Do you like this video?
Emancipation 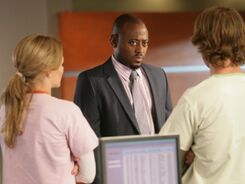 Foreman: "This boy is going to die. Are you selfish enough to let it happen?"
House: "Pot calling a kettle a pot?"
Foreman: "You’re a hypocrite. If our job is to find out what’s killing patients, you’d help this kid, but you’d rather play mind games to prove you’re the only one with magical powers."
— Emancipation

Emancipation is a 5th season episode of House which first aired on November 18, 2008.

The team tackles the case of a 16-year-old factory manager and emancipated minor who falls ill at work. As the case proceeds, it’s clear the patient isn’t all she’s making herself out to be, and she even manages to alienate Kutner to the point he quits the case. When the team does manage to diagnose her, her web of lies may hide the only thing that can save her. When House resists allowing Foreman to extend himself, Cuddy gives Foreman his own pediatric case. He soon turns to Chase and Cameron for help. When the child's unexplained illness brings him to the brink of death, Foreman is left questioning his ability to work without House’s oversight and finds himself at a loss when House refuses to help.

While two workers at a factory talk, one collapses onto the production line with blood bubbling out of her mouth.

Wilson wants to know if House asked out Cuddy, but House is deliberately evasive.

Kutner reports on the case. The patient is sixteen with no history of lung problems and no infection. Both of her parents are dead, and she obtained an emancipation order to be treated as an adult. Foreman thinks she is pregnant; House orders the test. Thirteen thinks it is drugs so House orders her and Taub to do an environmental scan. He tells Kutner to perform an echocardiogram.

Foreman asks House if he can help run a clinical trial. House refuses because it will take too much time.

Kutner performs the echocardiogram and discusses the loss of his parents with the patient. Kutner tells her it's the worst news a person can ever receive. Her heart is fine.

Thirteen and Taub search the patient's apartment. It's tidy and clean. They discuss how much people should trust each other. They find a bong.

House still thinks it's the heart – intermittent tachycardia caused by drug abuse. He orders Foreman to give her beta blockers. Foreman tells the rest of the team to do it. The patient tells them the bong belongs to her ex-boyfriend. She wonders why the doctors aren't trusting her. Kutner tells her the only other possibility is vasculitis and if they give her steroids if she doesn't have it, she will die. She swears she has never used drugs and Kutner goes to get the steroids.

Foreman complains to Cuddy about House denying him the opportunity to do a clinical trial. He offers to work in the clinic, but Cuddy gives him the case of a young boy with abdominal pain, diarrhea and bloody vomit that has lasted for four days. Foreman reassures the family.

House's patient has a psychotic break. They manage to sedate her. Kutner tells Taub he gave her steroids and not beta blockers.

House and Kutner argue about the drug switch, but Kutner argues the psychosis is a new symptom. Foreman thinks it is an angina in the brain. House agrees it's a possibility, but tells Foreman to do the fMRI to confirm himself. He tells the others to set it up and page him.

Foreman goes back to his patient. He gives the patient a pill to swallow containing a camera. The patient's brother talks him into it. Foreman talks to the older brother about the way he treated his younger brother. Suddenly, the patient starts laughing uncontrollably.

Foreman goes to visit Cameron and Chase to get a differential for the giggling. There is nothing wrong with the digestive tract. He tells them it isn't House's case. Chase tells him no matter what he's trying to prove, it won't be enough.

Foreman goes to do the fMRI on House's patient. It's going well, but Kutner sees something weird and starts asking the patient about the death of her parents. He realizes her parents aren't dead because the fMRI shows she's lying. She tells Kutner she got emancipated because her father raped her and her mother ignored the problem.

Taub thinks the rape brings STDs into the differential, but Kutner thinks she’s lying about it. House thinks the symptoms could have been brought on by extreme stress. He orders diazepam, an anti-anxiety drug.

House tells Wilson he went to Cuddy's house, but didn't go in. Wilson is pleased he at least thought it through. House wants his advice, but Wilson won't give his opinion.

House's patient wants to know what happened to Kutner. Thirteen tells the patient she should file a complaint over the rape, but the patient doesn't want to do anything more about it. All of a sudden, Foreman notices the patient's urine has changed color, showing it isn't stress.

The brown urine is being caused by dead red blood cells. They think it might be E. coli or legionellosis. House asks about the furniture in her apartment. He thinks it might be arsenic from the pressure treated wood.

They successfully treat House's patient with chelation therapy and remove the arsenic. Thirteen tells the patient she can do whatever she wants about the rape. Suddenly, the patient has a seizure.

They do another MRI on House's patient's brain and find new lesions. House wants to give her arsenic again, because it was probably what killed the real disease. One disease affected by arsenic is acute promyelocytic leukemia and it fits all the symptoms. However, the patient will still need a bone marrow transplant. House orders a biopsy on a lesion and treatment with arsenic. He also tells them to have the patient tell them where her parents are so they can test them to see if they can donate.

Foreman asks House about his case. House has already realized Foreman was working on another case. House refuses to help. House then goes to see Wilson about what he should do about Cuddy, but Wilson still won't express an opinion.

They biopsy the patient's brain and tell her her parents are the best bet for a bone marrow match, but she won't consider it. Taub lies to the patient and tells her he has Huntington's disease and how he would do anything to stop it, giving Thirteen a speech about it at the same time. The patient asks Taub if he's ever been raped.

Taub and Thirteen get into an argument. The patient has tested positive for acute promyelocytic leukemia. House tells them to check the donor banks. Thirteen wants to track down the parents, but House won't consider it either. Thirteen goes to do it anyway.

Foreman goes to talk to Chase and Cameron again. They are not surprised House refused to help. Chase thinks it might be Munchausen by proxy. Foreman starts thinking about the older brother and how much he does for the patient. He suddenly thinks of something.

Thirteen finds House's patient's parents. She finds another person with the patient's name in the parent's house. She realizes the patient is lying again.

The patient admits she stole someone's identity to keep her parents from finding her. They realize she isn't emancipated either and threaten they have to get the parent's consent. The patient realizes if she's sick enough, they will have to treat her even without parental consent.

The team can only find a partial bone marrow match. Taub tells House the patient only wants to punish her parents. When House asks how Taub figured that out, Taub tells him that's what the patient said. House wonders why the patient has so little emotional response – she's making rational responses instead. He thinks something worse than rape happened. He confronts the patient. He realizes the patient has a need to be seen as independent so they won't see her as someone who has done something terrible, which is how she sees herself. He thinks the patient has done something so bad she feels she doesn't deserve to live. She finally admits her brother died while she was supposed to be taking care of him. House tells her her parents really will hate her if she dies. He gives her his phone.

Foreman's patient improves rapidly and is discharged. The mother hugs Foreman on the way out. House's patient's parents arrive and start embracing their daughter. The patient gets a bone marrow transplant.

Foreman says he's going to do clinical trials. House agrees. Foreman wants to know why House is now agreeing to let him do it. House said it was because the first time, Foreman asked, whereas this time, he just told House what he was going to do.

House wonders if he should have helped Foreman. The patient may have died. Wilson tells him he probably knew Foreman would figure it out in time.

Wilson and House see Cuddy in the clinic office. Wilson asked House if he wanted to talk about Cuddy. House says no. As both were walking out of the hospital, Wilson says "you're gonna be okay House", in which House responds "good to know."

Two for this episode. Acute promylocytic leukemia is a rare sub-type of a kind of leukemia that accounts for only 1.2% of cancer deaths. It rates a solid 7 out of 10. Iron toxicity is fairly rare, and is even more rare from an overdose of dietary iron (it usually results from genetic conditions like hemochromatosis). It rates a 5 out of 10.

Retrieved from "https://house.fandom.com/wiki/Emancipation?oldid=57522"
Community content is available under CC-BY-SA unless otherwise noted.