Start a Wiki
watch 01:11
The Loop (TV)
Do you like this video?
Finding Judas 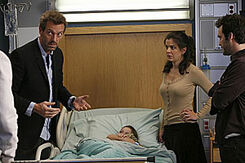 Chase: "We’re not even certain this was an infection."
House: "Right! She’s sick! She’s cute! She can’t have flesh-eating bacteria! It’s just wrong! Let’s cure her with sunshine and puppies! Cute kids die of terrible illnesses, innocent doctors go to jail it’s because cowards like you won’t stand up and do what’s required! You can sit around and moan about who’s the bigger weakling, I’m going to go do my job."
―Finding Judas

Finding Judas is a 3rd season episode of House which first aired on November 28, 2006. The team treats a young girl who is the subject of much contention between her divorced parents. When they can’t stop arguing, the court makes Cuddy the patient’s medical proxy. Cuddy tries to deal with House’s Vicodin by giving him regular small doses instead of a floating prescription, and House starts feeling the effects of the reduction. His team believes that his lack of Vicodin is hurting his judgment. Meanwhile, Tritter tries to get one of the team to turn on House, but instead finds help from an unexpected source.

While on a ride at an amusement park with her father, a young girl starts screaming in pain.

Meanwhile, House is having fun pointing a laser pointer at Cuddy's head and breasts while she meets with donors. She leaves to give House his carefully metered dose of Vicodin. House wants a free standing prescription, but Cuddy refuses. She tells him to dip into one of his secret stashes.

The team is discussing the patient. House bursts in and grabs some spare Vicodin from a Lupus textbook. He thinks the patient is suffering from gallstones and pancreatitis, even though they are unusual in young people. He orders an ultrasound to confirm, and he turns out to be right.

The parents argue about whether they should remove their daughter‘s gall bladder and can’t agree.

Tritter comes in during his vacation to investigate House’s case. Cuddy confronts him about disrupting her doctors' lives. Tritter says it's his job to put pressure on people. He claims that no one is innocent because no one has told him the truth and that they had better face up to the fact that House is an addict. He claims doctors are covering up House's addiction, not treating it.

House confronts the mother about not wanting to remove the gall bladder. The father is for the surgery. House schedules a court hearing to make the father the patient's medical proxy. House testifies that the child might die. Cuddy confirms to the judge that House is a jerk, but tells her that he knows what he is talking about.

The judge appoints the father as medical proxy and they remove the patient's gall bladder. However, after the operation, the girl complains that her skin hurts. Foreman examines her and finds a large rash on her abdomen.

House finds his team all on their cell phones. Cameron and Foreman have had their accounts frozen, but Chase's account is still not frozen. The main symptom they can't explain is the rash. House orders a scratch test for allergies and, if those are negative, antibiotics. Foreman does the test and the wife discusses why she divorced her husband. However, Foreman doesn’t care.

House and Wilson confront each other. Chase comes in to report that the patient seems to be allergic to everything. House grabs one of Wilson's peanut butter sandwiches to confirm his theory that it's an infection. He gets the patient to eat it, and she suffers no adverse reaction. House orders antibiotics, but given the risk of an allergic reaction, the father refuses.

House has another court hearing, but gets the same judge. The judge orders that Cuddy be the patient's medical proxy. Cuddy is stunned with the decision, but orders just metronidazole instead of the broad spectrum House had planned.

Tritter questions Foreman about how many pills a day House takes. He wonders why he doesn’t care about his brother being in jail for drug use, but he’s willing to lie about House’s drug use. He offers Foreman a deal—if Foreman testifies, he will see that Foreman's brother will be able to go free in less than two months. Tritter reminds Foreman about his own criminal history, and how although he and House have had more than one chance, Foreman's brother hasn't.

The patient has no reaction to the antibiotics. The patient's parents start arguing. Cuddy throws them out of the room because they are giving the patient an anxiety attack. She tells them not to come back.

House is mad at Cuddy both for not giving the patient broad spectrum antibiotics and not giving him more Vicodin. Cuddy tells him he can use aspirin if he’s still in pain. That gives House an idea and he starts questioning the parents about giving the girl aspirin. They deny it, but the patient was with a baby-sitter before she came in. They decide to treat her for the possibility she has Reye's syndrome.

Dr. Cuddy explains that the machine will take her blood in and out and it is painless and boring. Doctor Cuddy prepares the procedure.

Tritter questions Cameron. He tells her that she probably won't betray House because she's in love with him. He also knows how honest she is, reminding her of how she ratted herself out in university about getting a A in calculus on an exam with a mistake, and claims House has changed her. Cameron walks out.

Foreman is observing the patient and says the treatment is going as planned, when they note the patient has a blood clot. They take her to surgery to treat the clot, but her body temperature starts to rise quickly. Cuddy orders cooling blankets.

Tritter questions Chase. Chase admits he lied about his accounts being frozen, and that he did it to make it look like he didn't rat out House. Tritter tells him that he the team's accounts will be unfrozen in 24 hours. He makes it look to the public in the cafeteria that Chase did squeal on House, by acting nice to Chase and making him look cooperative.

The team is trying to cool down the patient's body temperature, but they have no ice packs and the cooling blankets are all in the emergency room. Cuddy rushes the patient out of the operating room.

Cameron and Chase are trying to find a new diagnosis, but House is too upset about his Vicodin to be of much help. He notices Cuddy is no longer in the OR. He finds Cuddy in the shower with the patient, trying to cool her down. She has also noticed the rash has spread to the patient's arm. House still thinks it is an infection and that it is Cuddy's fault for not giving her broad spectrum antibiotics. In a moment of anger, he also tells Cuddy that "It's a good thing you failed to become a mom, because you suck at it!" before he leaves her.

The rash and fever are clearly not the result of treatment, because some of the rashes are on places they haven‘t touched. Broad spectrum antibiotics clearly won't work—they have to find the specific infection. The team tells House that all their accounts have been released. Cameron and Foreman suspect Chase has talked, but House doesn't care. He feels Rocky Mountain spotted fever is most likely and orders treatment.

Wilson goes to see Cuddy and finds her crying, he asks what House did. Cuddy tells him that House was mean on purpose, which is out of character. She tells Wilson that House is a master of putting people down, and that he directly attacked her about her ability to be a mother, which he had ample opportunity to do before, but didn't. Now she's questioning her ability to be a mother.

The team discusses House's behavior, and whether it might be due to withdrawal. Chase is fooling around with House's laser pointer, when he thinks about another diagnosis. He goes to House with a diagnosis of erythropoietic protoporphyria, a disease where the body reacts adversely to light. All her symptoms appeared when she was out in the sun or under bright hospital lights. House doesn't care, but Chase insists that he stops the surgery. House strikes Chase, knocking him to the floor. However, Chase persists with his diagnosis. The liver shutdown is the result of porphyrins building up there. House finally agrees and they cancel the surgery just in time.

Cuddy explains the disease to the parents, and that it is genetic—both parents have to be carriers of the faulty gene. Although the patient will need medication and to be shielded from light, she will live.

Chase meets Wilson in the lunch room and tells him how he successfully diagnosed the patient and that House didn't seem to care that he was right. Wilson tells Chase that he had better be satisfied that he helped the patient and that he should never expect House to appreciate him. As Chase leaves, Wilson notices the large bruise from House's punch.

All forms of porphyria are very rare in the United States, occurring in about 1 out of every 25,000 people. However, the disease is also very difficult to diagnose. EPP is a deadly disease and has no cure. The only way to treat it is to place the patient in a dark room and seal off all the windows with shades. EPP sufferers must also wear protective clothing or spacesuits when they are outdoors to limit their exposure to UV radiation which causes it.

Retrieved from "https://house.fandom.com/wiki/Finding_Judas?oldid=56530"
Community content is available under CC-BY-SA unless otherwise noted.