Start a Wiki
watch 01:38
The Loop (TV)
Do you like this video?
Forever 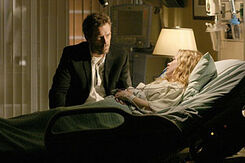 House: "You know what else might be a trigger? Physical illness. It’s a wild idea I know, especially since she doesn’t have any obviously physical symptoms like internal bleeding or excess calcium"
Foreman: "I’ll draw some blood, test for..."
House: "Uhh! Geez! You’ve done it again! Will you argue with me! Drinkers don’t eat right, explains the bleeding and the calcium. This might just be some crazy drunk and I’m telling you that she’s about to die of mylomatous meningitis."
— Forever

Forever is a 2nd season episode of House which first aired on May 9, 2006. The team is faced with a woman whose behavior appears to be a threat to her newborn son. Meanwhile, Foreman starts to recover from his near fatal illness.

A man wakes up nauseous, but heads off to work after checking with his wife and newborn son. However, he vomits while going down the stairs and returns to his apartment, where he finds his wife having a seizure in the bathtub and the baby son underwater and not breathing.

House finds out that Wilson is going out to dinner with Cuddy. When House finds out Cuddy invited Wilson, he thinks Cuddy has an agenda. House arrives in his office to find only Cameron, with Chase serving extra duty in the neonatal intensive care unit. Foreman shows up after recovering from his brain damage. He doesn't seem to be suffering any permanent effects. House isn't interested in Chase's case until he learns all the obvious diagnoses have been ruled out.

They start discussing the case. House wants to assign an angiogram to Chase, but he says Cuddy has him stuck in the NICU.

The team rules out strep throat as a cause for the wife's illness. Cameron talks to Foreman, who seems unusually upbeat and content. Chase allows the father to play with the baby on the pretext it will help it heal, but at that moment the baby and wife both go into distress. The baby's lung is collapsing. The wife is in pain and bleeding, but obviously isn‘t having a seizure. They manage to stabilize the baby.

House confronts Chase about why he doesn't want to work with him. Chase says he needs a break from House's patients. House doesn't believe him. They argue about how to treat the baby.

The ECMO treatment will remove the baby's blood, reoxygenate it, and put it back in. This will deal more quickly with the infection even though they‘re also giving him antibiotics. The father agrees to the treatment when Chase urges it.

Cameron tells House the patient is bleeding into her brain. Foreman comes back from the patient’s apartment and has found hidden alcohol. They realize that alcoholism would explain the failure of her blood to clot and her seizure, and House figures it might be delirium tremens. House decides to induce a coma and Foreman goes to do it. House is infuriated that Foreman isn't fighting with him over his idea.

Wilson and Cuddy go to dinner. She asks about his divorce and whether he wanted kids. Cuddy says she only wanted to talk to Wilson and "catch up".

The wife awakens to see her husband and son. Foreman finds out that the couple met in Alcoholics Anonymous, so House was right. However, House realizes the baby is missing from its bed. They find the wife trying to smother it. House starts artificial respiration on the baby.

The son is stabilized, but his kidneys have been damaged. The team discusses whether the wife faked a seizure to hide her attempt to kill the baby in the bathtub. House is once again infuriated that Foreman isn't arguing with him. House still thinks it is a real seizure and orders Foreman to induce another seizure. Cameron argues with House about how he is treating Foreman. He orders her to keep an eye on Foreman to see he isn't overstressed. Foreman is fine with the fact that House doesn't trust him.

Wilson discusses the dinner with House, and insists it was a date. However, he is testing the saliva on Cuddy's spoon for cancer markers. They discuss why they should care about Cuddy. House says he doesn't want to train a new boss.

The baby's potassium is climbing because of the kidney damage, which is damaging his heart. Chase starts him on dialysis.

The wife experiences a seizure and delirium, and the team starts discussing the cause. However, they have ruled out any form of mental illness. If they don't find the cause, she will only get worse.

The team can't determine a diagnosis for the wife. House thinks it might be pellagra, a vitamin deficiency. Chase comes in to tell the team that the baby has died.

They treat for pellagra and the wife recovers. She remembers suffocating her baby and Foreman breaks the news that they couldn't save him. However, the wife starts vomiting blood, which can't have been caused by the pellagra. The team starts another differential. House becomes interested when he learns the baby's potassium kept rising after he was given drugs for it. House asks the father for permission to do a test on the baby. House confronts the husband about being hungover the morning his wife got sick. He asks if the wife was acting strangely before she got her seizures. The husband agrees to the test.

House tells Chase to do a biopsy on the dead baby, and reveals that Chase is working in the NICU to earn extra money. He figures that Chase's father disinherited him.

Wilson tells House that Cuddy is negative for cancer. Chase tells House about the biopsy results, which reveal that the baby and the mother have Celiac Disease. That caused them both to fail to take in nutrients - niacin and Vitamin K. The other symptoms in the wife are caused by lymphoma which is common with such disorders.

The wife is refusing treatment because she killed her son. House tells her that she was mentally ill at the time. She still refuses treatment. Foreman wants to try again, but House screams at him that not everyone wants to greet each day as if it were special. House also realizes that Foreman's new attitude was something he put on and didn't really believe in. He tells Foreman he needs someone whose self-worth is based on having this job.

The husband goes to see the wife. He tries to tell her that he wants her to get treatment so they can have another baby, but instead asks her to tell Michael he's sorry when she sees him.

Foreman is using flash cards to improve his recall. He starts with difficulty, but finally gets one right.

Celiac disease is a fairly common genetic illness. It is estimated that somewhere between 0.7% and 1.0% of the population suffer from it.

Retrieved from "https://house.fandom.com/wiki/Forever?oldid=56751"
Community content is available under CC-BY-SA unless otherwise noted.