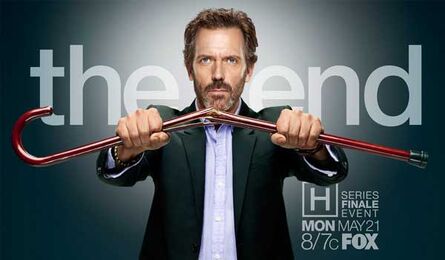 Sex Kills is a Season 2 episode of House which first aired on March 7, 2006. House quickly diagnoses a life threatening illness, but it won't do the patient much good unless he can figure out what was causing an illness in an accident victim whose heart the living patient needs for a transplant. Meanwhile, House suspects Wilson of cheating on his wife.

Here, the medical mystery is solved rather quickly, but the treatment requires House to walk an ethical tightrope in service of his patient.

While playing bridge and talking to his daughter, a 66 year old man (Hesseman) suffers an absence seizure.

The man is taken to Princeton-Plainsboro where he is examined by Foreman. He suffers from acid reflux and headaches, but denies having ever had any other seizures. He otherwise seems healthy. However, after he sends his daughter out of the room, he reveals he also has a swollen testicle.

They do a differential, but House doesn't think it is testicular cancer, because Foreman has probably already ruled it out. House thinks he has a brain infection caused by an STD even though his tests are negative. The only other explanation is lymphoma, which is terminal.

House runs into Wilson and wonders why he’s bought expensive chocolates for his wife.

Foreman confronts the patient about when he last had sex. He claims he hasn't had sex since his divorce a year ago. House still thinks it is an STD, and points out that the patient's daughter was in the room when Foreman asks. House goes to the patient, who admits that he recently had sex with his ex-wife - whom he had incidentally met at a cheese tasting - and he didn't want his daughter to know. House gives him the STD medicines. The patient admits that he has an STD to his daughter. However, at that point, the patient starts vomiting blood. House orders him sedated. He admits to the daughter that an STD wouldn't cause that symptom.

The team starts a new differential once they find out the patient's heart is damaged. House asks the patient what cheese he ate at a cheese tasting. He determines that the patient ate unpasteurized sheep cheese and got a brucellosis infection. Normal stomach acid would kill the brucellosis, but the patient was on antacids for his acid reflux. The bacteria multiplied and attacked his heart, brain and testicle. House starts him on antibiotics.

House knows that if they didn't catch the infection in time, the patient will soon go into cardiac arrest. Unfortunately, this turns out to be the case. House continues to accuse Wilson of having an affair because he is staying late at the hospital. He tells Wilson to go home and have sex with his wife.

The patient requires a heart transplant, but is otherwise healthy. House argues he is a prime candidate, but the hospital's transplant committee refuses on the grounds that he is too old. House implies one of them is a racist due to the fact that African Americans don't live as long. However, the committee turns him down. Foreman breaks the news - the patient will be dead within a week.

Despite the committee's refusal, House has to admit that he was merely acting as the patient's advocate and he actually agrees with the committee's decision. He still appeals the decision to the Board of Directors. He then goes looking for a new heart that won't be suitable for transplant to anyone else. Cameron finds a 40 year old overweight accident victim. However, the patient had a fever and stomach ache. When the woman dies, House tells the grieving husband he needs her heart.

Let's have some fun. The next featured article will be Amber hallucination!

The feature article for May, 2021 will be Sex Kills

Next month's featured article will be Muscle death

Once again, thank you for your patience while I got this month's featured article up and running. For next month, I've gone with Season 8's Perils of…