Start a Wiki
watch 01:11
The Loop (TV)
Do you like this video?
Insensitive 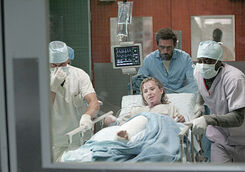 Wilson: "Is he asking for a spinal nerve?"
Cameron: "How did you know?"
Wilson: "Give us a minute."
— Insensitive

Insensitive is a third season episode of House which first aired on February 13, 2007. House wants to treat a patient who cannot feel pain, and may have his own agenda in order to treat his own pain. Cuddy meets a new man, only to have House track their every move and run interference.

A mother is driving her daughter, Hannah, to the hospital after she has fallen on the ice, but they get into an accident. The mother is unconscious, but the daughter is conscious and calls an ambulance. However, although she says she is all right, we see a piece of jagged metal sticking out of her leg.

Mother and daughter are taken to the emergency room at Princeton-Plainsboro. Foreman treats the daughter and House comes looking for him. House diagnoses the daughter with CIPA, a condition that makes the patient insensitive to pain, but she denies it. House has several reasons for thinking so, primarily that the patient didn't ask what CIPA was. To show he's right, he hits her with his cane and she doesn't react. He tells Foreman to do a full work up.

House asks Cuddy to work on the daughter. Cuddy feels that he only wants to work on her because she doesn't feel pain and he always does. He surmises Cuddy has a blind date. Cuddy allows him to do tests, but no nerve biopsy because of the risk of paralysis. She agrees to discuss it further if there is a problem with the EEG.

However, the patient resists being tested. They can't sedate her without her mother's permission, and the mother is still unconscious. House suggests breaking her arm if they have to—after all, it won't hurt her. The patient is demanding to see her mother when House comes in. They have a debate about who has it worse. While she tries to top him by showing him a burn mark on her posterior, he injects her with a sedative so she can be tested.

The tests show no problem, but as Cameron takes her temperature, she passes out. It turns out she has a fever of 105F.

They rule out an infection as a cause of the fever. House still wants to biopsy a spinal nerve. The team hopes that Cuddy will withhold permission. The team discusses how they should proceed, and Chase realizes that her lack of pain is what is preventing them from having a diagnostic clue. He suggests trying to stimulate her pain response until she feels something.

House finds Cuddy with her blind date to ask for the nerve biopsy. House starts giving the blind date the third degree, but he defends himself quite well. Cuddy gives permission for the biopsy.

They test the patient by having her stick her hand alternately in warm and hot water. However, she leaves her hand in the hot water too long and gets badly burned. The patient is more concerned about her mother's surgery. Next, they drill into her head and inject extra nerve transmitters. The patient discloses she's been arrested three times for fighting because she doesn't know when to stop. Suddenly, the patient starts screaming. They stop the procedure, but once they remove the drill guide, she smiles and runs out of the examination room with Foreman on her heels.

Wilson confronts House about the nerve biopsy. He knows House wants to do it to treat his condition, not hers. Foreman runs in to tell House the patient wants to jump off the balcony railing. Cameron realizes she’s having a paranoid delusion. The patient loses her balance after complaining she has no feeling in her legs and falls off the railing 15 feet to the floor.

The patient survives with several broken bones and a concussion, but she feels fine. Her paranoia has disappeared, but her organ systems are failing. House still wants to do a nerve biopsy. Cameron thinks it might be a thyroid storm. House goes to Cuddy's house for a consult because she's an endocrinologist, even though there is a specialist on duty. He finds her with her date. Cuddy rules out thyroid storm. Cuddy has suspicions about why House keeps dropping in on her and asks House if he likes her. He says his motive is just to mess with her happiness.

Cuddy goes back to her date, who is getting ready to leave. He is not leaving because of House, but because he is envious about Cuddy for liking and caring about what she does for a living.

The team is still resisting the nerve biopsy because of the risk of paralysis. Wilson hears about it, and once again confronts House on the theory he is trying to grow pain free nerves from his patient. He accuses House of risking his patient's life to improve his own and accuses him of a conflict of interest. House tells the team to biopsy a less vital nerve.

Foreman and Cameron discuss relationships. Foreman notes that Cameron knew when she got married that it would only last a few months. He believes commitment is only important when it has no end date. However, he admits that people who avoid commitment know how important it is.

The nerve biopsy shows a systemic disease, not a nerve disease. Cameron goes to check on the patient's mother. However, House chases after her to get Cameron to help with the diagnosis. Cameron goes to take the patient to her mother, who has just come back to consciousness. The mother apologizes for getting into a car accident and is more worried about her daughter than herself. The daughter apologizes for going on the ice and risking injury. The mother has to be taken back to surgery. Cameron notices the daughter is crying and has a terrible headache.

Unfortunately, the pain was emotional, not physical. House asks what condition can cause guilt, and points out B-12 deficiency can cause that. However, the patient was given standard Vitamin B-12 supplements after being admitted.

House goes to Wilson with the problem, and says if it isn't B-12, it is probably leukemia. While House is munching on Wilson's sandwich Wilson remarks that House must get a thrill out of "beating other hunters" to the food. House has his diagnostic epiphany and he runs out to see the patient, who is about to be given nitrous oxide. House says the last time she got nitrous (during her EEG), she got the symptoms. When the patient gets paranoid again, House rushes her into an operating room. The patient is screaming that they are about to kill her, and House grabs a scalpel and starts slicing into her abdomen, shocking everyone in the operating room. She screams, but House figures she is faking. House finds a huge tapeworm in her abdomen and removes it. The tapeworm was sucking out the B-12 as soon as she consumed it, causing her deficiency. Had she not had CIPA, she would have been in tremendous pain because of the tapeworm. House is also disappointed that it didn't beat the record for longest tapeworm.

Chase brings the patient to meet with her mother, who is recovering from her second surgery.

Foreman meets with his girlfriend and tells her he got her an interview for an important job in Boston. She realizes he wants to break up with her. He thinks she's angry, but she's upset because she cares about him.

Cuddy is sleeping alone. The patient and her mother are recovering. Wilson tells House to ask the patient for the spinal nerve, but he points out she has no reason to give it to him. Wilson invites House to breakfast.

It's Valentine's Day, and Cameron asks Chase if he's interested in having sex with her on a "friends with benefits" basis because she figures she won't fall in love with him, and they have already had sex.

Although tapeworm infections aren’t uncommon worldwide, they are increasingly uncommon in the United States due to food processing and cooking methods.

Retrieved from "https://house.fandom.com/wiki/Insensitive?oldid=52196"
Community content is available under CC-BY-SA unless otherwise noted.