Kalvin Ryan was the 30ish, gay patient with aids who appeared in the episode, Hunting.

Kalvin had been following Dr. House to convince him to take his case. Dr. House immediately noted that he had lost weight, looked flushed indicating a fever and is short of breath. In addition, there is a Kaposi's sarcoma lesion on his face meaning he is HIV positive and it has progressed to full blown AIDS. Dr. House tells him to go to an HIV specialist, but Kalvin begs House to look at his file because his T-cell count is normal and he has already tested negative for T-Cell sarcoma.

To prevent him from leaving, Kalvin grabbed House's cane but when House let go he collapsed and went into Anaphylactic shock. Kalvin is taken to Princeton-Plainsboro Teaching Hospital, is given epinephrine and is stabilized. Dr. Cuddy and the hospital general counsel demand that he take the case to avoid being sued by the patient. Dr. House finally agrees and goes to his team with the theory that Kalvin has an infection. Dr. Foreman tells House that Kalvin went to an HIV clinic the previous week, and he tested negative for tuberculosis, PCP, MAC, CMV and HSV which rules out an infection. Dr. House tells them to re-do the tests anyway. Dr. Cameron tells House that his T-cells are at 200 which is enough to fight off an infection. House suggests a parasite, Dr. Chase tells him the stool sample was negative. Dr. Cameron reviews the file - Kalvin's T-Cells had dropped to 30 before he switched medication, at which point his viral load dropped. However, he continued to get sicker. 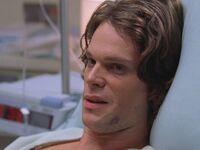 Dr. House then says that it might be an autoimmune disease. Dr. Cameron objected that it is impossible for an AIDS patient to have an autoimmune disease (they are opposite processed - AIDS is caused by a weak immune system). However, Dr. House believes the new medication he was taking made his immune system so much better it made him sick by attacking the remnants of old infections - immune reconstitution syndrome. Dr. House tells the team to take a chest X-Ray to find an old infection and start him on steroids.

Dr. Wilson hears about the treatment plan and notes that if it isn't an autoimmune disease, the steroids will suppress what's left of his immune system.

Dr. Cameron tells Kalvin that his lymph nodes aren't swollen. Kalvin makes a pass at Dr. Chase. Dr. Cameron takes a medical history and finds out that Kalvin's mother died from complications of diabetes mellitus and his father has recently developed cirrhosis. Kalvin tells Chase that his father threw him out when he was sixteen.

The chest x-ray shows too much scarring to determine which infection might be responsible for immune reconstitution. Dr. Cameron learns that Kalvin is a smoker and his tox-screen came back positive for recreational drugs. His heart is a little enlarged but that is a typical side effect of AZT. His most recent infections are Toxoplasmosis, CMV and PCP. Assuming it's one of those they give him ganciclovir for the CMV, sulfadiazine for the toxoplamosis and Bactrim for the PCP. Kalvin admits has been doing crystal meth and ecstasy, as well as engaging in frequent uprotected sexual encounters. Kalving has now started coughing, and Dr. Cameron tells him to take a deep breath. However he looks and his hand and realizes that he is coughing up blood, and some of his blood goes into Cameron's eye. She goes to the hospital's infection control officer for treatment for HIV. 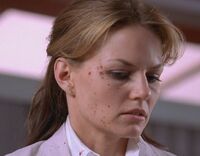 Kalvin's coughing was caused by a ruptured blood vessel in his lung, which Dr. Chase soon repaired. This ruled out immune reconstitution. Dr. Chase thinks it might be Kaposi's syndrome, but there was no edema or bloody urine. Dr. Foreman thinks the bleedings might be from lesions from Kaparsi's scarcoma in the lungs, but Dr. Chase didn't see any lesions when he repaired the tear. Dr. Chase suggests granulomatosis with polyangiitis, but it would have responded to steroids. Dr. Cameron thinks that his drugs were tainted, House tells them to find his pills and test for toxins. Dr. Cameron and Dr. Chase break into Kalvin's hotel room looking for drugs, but come back empty handed. However, they do find some broken light bulb props in a picture he took were made from 1930 fluorescents, which contained large amounts of beryllium. Beryllium dust inflames the lungs and they get rigid, causing breathing problems - acute berylliosis.

The get a biopsy on his lung tissue and run a spectrographic analysis. While doing the test, Kalvin tells Cameron that he brought crystal meth into the hospital in his bag and offers them a sample. Kalvin encourages Cameron to get angry about the HIV that she may or may not have like he was when he got it.

Later on Kalvin's chest starts hurting, his heart rate rises to 100 and keeps climbing. Dr. Foreman thinks it might be an allergic reaction. Dr. Cameron notes that his neck veins are up so it must be pericardial effusion. However, she listens to his lungs and hears no wheezing. Dr. Forman figures out the tear in his lungs has reopened: he is bleeding into his pericardium. Kalvin tells them to tell his dad that he is sorry. Dr. Foreman inserts a syringe into the pericardium to try to take the blood out but the fluid is clear. He may have a tumor in his heart. 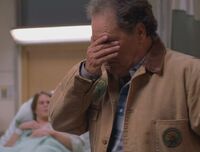 in his lungs. Dr. Wilson says that it's classic Non-Hodgkin's lymphoma, but Dr. Cameron thinks it could be sarcoidosis. However, his lung tissue biopsy was negative. Dr. Cameron wants to do the Kveim-Siltzbach test. Dr. House, despite being worried about the necessary paperwork, tells them to do it. Dr. House asks Dr. Cameron about Kalvin's father. She tells him that he isn't coming. Dr. House wonders why Kalvin wanted to apologize to his dad now instead of doing it before. He also wants to know why Kalvin wants to apologize when his father kicked him out.

Dr. Cameron explains the sarcoidosis test to Kalvin. He tells Cameron that if his dad had come he would have tried to "straighten him out". He finds out his drugs were disposed of by the lab and recommends crystal meth to Cameron. He tells her that getting HIV might have been the best thing that happened to him. He used to be a "good boy" and didn't want to piss people off but now that he has stopped "playing by the rules" he is happy. 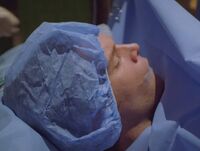 At the hospital the next morning the patient's father shows up at the hospital. Dr. House notes that the more he talks, the more he sweats. The dad is mad at Kalvin. At first, Dr. House thinks it is because Kalvin is gay but the dad claims it has nothing to do with that. He tells House that Kalvin brought it on himself with what he did to his mother. He claims that Kalvin killed her. Dr. Cameron finds out that Kalvin's mom's kidneys were failing and Kalvin was a match, but he was also HIV positive. Without a qualified donor, she died.

The Kveim test results indicate that Kalvin has cancer. Dr. Wilson breaks the news to Kalvin. He will need a biopsy, but the tumor is near the aorta so the risks are high. He explains the procedure to Kalvin.

Dr. House finds out Kalvin's dad is still in the hall and finds out that he is still sweating. Dr. House learns that they are from Montana. He tells Dr. Wilson to cancel the biopsy because it will kill him - Calvin has a parasite.

Dr. House brings the dad to the patients room. He asks if they used to hunt foxes together. Dr. House tells Kalvin the things in his chest are most likely parasitic cysts from echinococcosis. Kalvin tells Dr. House he was tested for parasites, but he tells him the cysts isolate them so tests will be negative. Dr. House tells the dad he probably has the same thing in his liver - it's commonly mistaken for cirrhosis but cirrhosis can't explain the fever both he and his son share. He can't biopsy one of Kalvin's cysts without killing him, but he tells him that if he can diagnose if from taking a blood test from him, that will confirm it. However, the father refuses to be tested because Kalvin expressed no regret for his mother's death. Dr. House deliberately gets the dad angry by insulting his dead wife. The dad punches Dr. House, who retaliates by striking him in the liver with his cane. The blow causes one of the cysts to rupture, leading to the same anaphylactic shock that Kalvin had. 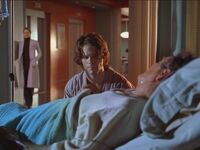 Dr. House schedules surgery for Kalvin and his dad to use liquid nitrogen to neutralize the cysts and remove them. The surgeries are successful and both patients improve quickly. Cuddy tells House that the patients might sue due to the fact that he assaulted them and he needs to go to see Stacy Warner. However, she's more concerned about the injuries that were caused by the father. Dr. Cameron confronts the patient about his lifestyle; she thinks that he's self-destructing because he blames himself for his mom's death. She points out that his only visitor was his father. Kalvin is last seen reconciling with his dad.
Retrieved from "https://house.fandom.com/wiki/Kalvin_Ryan?oldid=56691"
Community content is available under CC-BY-SA unless otherwise noted.