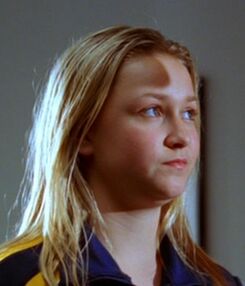 The coach on his swim team:

"These kids are all very mature. Travel around the country from event to event."
―Kids

Kids is a 1st season episode of House which first aired on May 17, 2005. House is drawn away from trying to get Cameron to return to PPTH when a meningitis epidemic overwhelms the Princeton area hospitals. When he comes across a 12 year old diver with symptoms that don’t quite fit meningitis, Cuddy figures he’s just trying to get out of the boredom of screening dozens of people. However, when the diver gets worse, House finds the hospital’s resources stretched to the breaking point.

At a swimming and diving meet, one of the judges collapses and is shown to be bleeding from one ear. His lumbar puncture indicated a virulent strain of bacterial meningitis.

Cameron is enjoying being away from the hospital when House drops by to tell her that Vogler is no longer chairman of the hospital. He asks her to go back, but Cameron resists. All of a sudden, House is paged to come to the hospital to deal with an epidemic. He tells Cameron she's a good doctor, but she says that's not a good enough reason to come back.

House arrives at the hospital, which is dealing with the outbreak could have affected 2500 people at the pool. Cuddy insists that House help out, even though he resists. While House diagnoses the meningitis, he also diagnoses all the other problems the patients have.

House comes across a 12 year old diver. She has a fever and a rash that she says she’s had for a week. He notices her neck is stiff, but only from side to side. House finds Foreman and Chase to discuss the diver; despite the symptoms, he doesn‘t think she has meningitis. Cuddy intercepts the team, but she agrees to give them an hour to work on the diver. He orders Chase to do research on neck pain (mostly to punish him for working for Vogler) and orders Foreman to treat her for meningitis in case that he is wrong. Foreman can't get anyone to help with a lumbar puncture, so he has to do it himself with the help of the patient's coach.

Chase is putting up with the humiliation of searching the internet. The tests show the patient doesn't have meningitis or other infections, but they have no idea what is causing her symptoms. Foreman plans to admit her when all of a sudden, she thinks her eyes are bleeding, but it’s only tinged tears from the antibiotics. However, he notices blood in her mouth.

It turns out that the blood is coming from her digestive tract. They stick an endoscopic camera down her esophagus and into her stomach, but find no bleeding. They give her a camera in pill form to swallow to check her intestines. House once again humiliates Chase by complaining about him helping Foreman to do the endoscopy. They do find a small bleed, but that doesn't explain all her symptoms. All of a sudden, Cuddy comes in to get them to return to help with the meningitis outbreak as it‘s been three hours and it appears the patient can wait. Cuddy reminds House that he cost the hospital $100 million by forcing out Vogler and that‘s why they‘re so busy now.

House is forced to go back to testing meningitis patients. But the team and Wilson keep up a differential. House finds one faking and sends her to the psych ward. He orders Foreman to get a bone marrow biopsy to check for bone cancer.

Wilson discusses how House is treating Chase for betraying him to Vogler. House says he has no intention of firing Chase, just making him miserable. Cuddy comes by to tell House he has an interview with someone to replace Cameron and help out with the epidemic.

Foreman is looking for somewhere sterile to perform a bone marrow biopsy on the diver. Foreman finally has to take her down to the morgue.

Foreman tells the patient and her visitors it probably isn't cancer, but they still can‘t release her. At that moment, she has an absence seizure.

The team meets in the men's bathroom to get away from Cuddy. The patient's symptoms are getting worse and she‘s having more seizures. They suggest she might have been poisoned. They need to do a CT Scan, but all the machines are busy with meningitis patients. Chase suggests a transcranial ultrasound, and House sends Foreman to do the procedure and Chase to complete the research.

The next interviewee is an attractive woman who speaks four languages. They trade Jewish jokes. She says she’s fine with whatever House says. House rejects her - her shoes were stylish, which means she cares more about her looks than her comfort. Wilson points out House needs someone who can handle pain.

Foreman performs ultrasound on the patient's head. Chase tests for toxins. House and Wilson argue about the applicants House is rejecting. Wilson points out House blew it with Cameron and every woman he's ever cared about.

The tox screens show nothing. House asks Cuddy for a neurosurgeon because his patient is bleeding into her temporal lobe. Cuddy agrees. They perform surgery to reduce the bleeding and the pressure inside her head. Finally, the patient's parents Mr. Carroll and Mrs. Carroll show up, but Foreman still doesn't have any answers for them.

The team goes back to trying to figure out what is wrong with the patient. House tells them to focus on what information they do know. He knows they are missing something. He looks at all the balloons and gifts she has been getting. House starts focusing on the rash and asks if any of the male competitors have visited her. All the female competitors have, but none of the males. Chase figures the males are avoiding her. Although her latest tests show her red blood cells are intact, but House orders Chase to check her blood. He finds that the patient hasn't really got a rash - she is bleeding into her skin - it‘s Thrombotic thrombocytopenic purpura. However, only two obvious things set if off: an E. coli infection she obviously doesn‘t have, and menopause. However, House realizes one cause of the disorder is unlikely, but possible. House goes to tell the patient she's pregnant. The pregnancy is causing her blood to clot and be shredded by the clot - a rare complication. He finds the fetus on the ultrasound. She admits she experimented with intercourse. He tells her they have to terminate the pregnancy and treat her blood for antibodies. He agrees not to tell her parents because he has an ethical duty not to. House goes to tell the parents she will be fine, but refuses to tell them what the underlying cause is.

The patient is treated and improves. She asks to see her parents. She tells them about the pregnancy and they embrace her.

The epidemic ends and House starts interviewing another candidate. He tells the candidate the position has been filled. He goes back to Cameron and tells her he needs her to keep him in his place. Cameron tells him she has already found another position. House tells her he wants her to come back. She says that's not good enough. She says he has to take her out on a dinner date. House agrees.

Retrieved from "https://house.fandom.com/wiki/Kids?oldid=32461"
Community content is available under CC-BY-SA unless otherwise noted.