Start a Wiki
watch 01:52
The Loop (TV)
Do you like this video?
Larger than Life 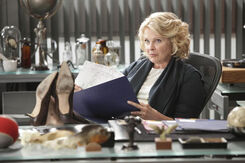 Cuddy: "Did you sedate my mother?"
House: "Kicked in just in time!"
―Larger than Life

Larger than Life is a 7th season episode of House that first aired on January 17, 2011. It is written by David Hoselton. Candice Bergen appears as Cuddy's Mom in this episode.

A man is with his daughter on a train platform when a woman has a seizure and falls on the railway tracks. The man jumps onto the tracks and tries to wake the woman. When he realizes the train is coming, he cries for help, but at the last moment he covers the sick woman’s body with his own, getting them both off the rails. The train stops on top of them, then moves off to show that they have both survived. The woman seems to be recovering and the crowd on the platform applauds him. He sees a medic alert bracelet and realizes the woman is an epileptic. However, as he stands to re-join his daughter, he collapses.

Masters brings the subway hero’s case to House. House is uninterested in the heroism and asks Masters what the most interesting symptom is. House instructs them to look for masses in the limbic system.

The patient is enjoying his fame when his wife Eva shows up. Like House, she is not impressed with what her husband did.

House goes to speak to Cuddy about going to Cuddy’s birthday dinner with Cuddy's Mom. House wants to attend a film festival with Wilson. Surprisingly, Cuddy is supportive of House’s plan, as she describes her mother as “a handful”. However, House uses the excuse that he has to go to Cuddy’s birthday dinner to get out of the film festival with Wilson. Wilson agrees the birthday is more important.

Taub is driving home when he sees a billboard publicizing the hospital with his picture on it. When he gets home, his wife has seen the billboard too. The original plan was to have a bunch of doctors on the billboard, and Taub has no idea why it’s just him. Taub is still upset about Rachel’s online friend, but Rachel is in the mood to kiss and make up.

Masters is doing her first dye injection, but when she does it, the patient’s blood pressure spikes up and Chase can’t get it down. He asks for the catheter and tells Masters to get the crash cart. However, the patient’s vital signs come back to normal.

The team is admiring Taub’s face on a bus shelter while they do a differential. Masters says the arythmia during the procedure shows a heart problem, not a brain problem. Masters notes that both of the attacks happened after stressful incidents. House colors Taub’s portrait to make him look like Hitler. Foreman suggests an autonomic nervous disorder and House thinks it’s a good idea. He orders a pituitary biopsy. Masters knows a sample of the adrenal gland is a better idea and realizes House still thinks it’s a brain problem. Chase agrees with Masters and House agrees to test the adrenal gland.

Chase tells the patient about their idea, but the wife wants to hear from Taub because he’s the face of the hospital.

House is stealing food when he finds Cuddy and Wilson behind him, obviously aware of his deception. House tries to justify himself and says he was just planning to sit alone watching television. They tell House he has to choose. House chooses Wilson, but it turns out Wilson is coming to Cuddy’s birthday dinner too.

The wife is telling Taub that her husband has been touring as a muscian for sixteen years looking for a break. She loves him, but she’s at the end of her rope. Taub assures her that her husband’s act of heroism shows there’s more to him.

Chase and Foreman are doing tests and Chase is wondering if Taub really does look more trustworthy. Foreman tells Chase that Chase is too pretty to be trustworthy, and Foreman says he was cut out because he’s black. The tests show that the patient’s adrenal glands are fine and they realize they have to do the pituitary biopsy.

Chase and Foreman start the procedure while they discuss racism. All of a sudden, the patient stops breathing. Chase uses suction and finds a mucous plug - the patient starts breathing again. They realize fluid in the lungs doesn’t fit anyone’s theory.

The team starts a new differential, and focus on the heart and lungs. House wonders if the patient risked his life because he knew the woman on the tracks, a woman by the name of Chloe Jeffries. House thinks he’s been cheating with her and may have been exposed to something toxic. He tells his team to focus on the girl and where she and the patient spent time together.

Chase and Taub do an environmental scan of the epileptic woman’s apartment, while Taub discusses how great his sex life with Rachel has become since his picture went up. However, Taub’s afraid that it’s related to the man she’s been talking to on the internet. Chase finds a CD of the patient’s band in the woman’s apartment. Taub finds roach spray.

Meanwhile, House is in the clinic with an older woman who say’s she’s tired all the time and she has a pain in her leg. However, all her tests are normal and House tells her there’s nothing to worry about. The woman says her daughter, a doctor, also dismisses her concerns. House says she sounds smart. The woman asks if her daughter told House to say that, but House says he’s never met her daughter. However, when the woman tells House he’s been “shtuping” her daughter, he realizes the woman is Cuddy’s Mom.

House calls Cuddy and tells her they have a “situation”.

The team confronts the patient about Chloe, but he denies knowing her. However, Chloe comes in to thank him and assure him she’s all right. They find out Chloe got the CD from one of her nurses, who did know the patient. Masters asks for a sputem sample to test her theory. However, the patient is having difficulty spitting. Masters pats his back to help out when the patient starts feeling intense pain in his ears. Masters thinks that the ear pain points to an infection, but House thinks it’s a tumor. He orders an auditory potential test.

House goes to tell Cuddy he’s been nice to old Jewish women for months and it would have been nice for him to have been told Cuddy’s Mom is actually a Gentile who converted. Cuddy is supportive and knows that her mother set up the situation to check House out. House tries to duck out of dinner, but Cuddy won’t hear of it - he tells him to shut up and be nice for two hours so she will feel better.

Taub and Rachel have had sex again, this time in the hospital. She brings up her online friend and Taub wants to return to work. He asks Rachel if she’s in love with him, but she just says she’s never met him.

The patient’s auditory test seems normal, and Masters thinks House is wrong. Masters wants to drain his ear to test for infections. Foreman and Chase play rock, paper, scissors to see who has to supervise her and Chase loses.

House, Cuddy, Rachel Cuddy, Wilson and Cuddy’s Mom are having dinner. Cuddy's Mom complains that Rachel isn’t eating properly. House sticks to safe subjects. Wilson tries to support Cuddy, but the mother is having none of it. The mother then complains Cuddy is never home with Rachel. House takes a call from his team about the ear pain going away and thinks it might be referred pain from his thyroid pain or liver. Masters still thinks it is an infection, but when House is telling her off, his phone goes dead. Cuddy serves coffee while the mother discusses whether House would convert to Judaism if they got married. House announces he’s an atheist and the mother says half the Jews she knows are too. The mother also wants to know why Cuddy keeps calling him by his last name. She also tells Cuddy she doesn’t want Rachel growing up thinking her mother’s a slut. However, when House goes to confront Cuddy's Mom, she closes her eyes and collapses backwards. Cuddy examines her and realizes she’s been sedated and House quickly admits he’s the one who did it. Wilson is initially supportive until he realizes House has drugged him too.

The patient’s thyroid levels are fine and Foreman starts a liver biopsy. Masters finds Taub in the cafeteria and realizes he’s down about something. Taub admits he’s worried about his wife’s online relationship, but tells Masters Rachel is the only woman he’s ever loved and he doesn’t know how to live without her. However, he also can’t guarantee he’s not going to cheat again. The biopsy shows autoimmune hepatitis.

House and Cuddy are washing the dishes while her mom and Wilson sleep off the sedation.

The patient is teaching his daughter how to play the guitar when he has a seizure.

The patient had three seizures overnight, which points back to the brain. House is avoiding his office because Cuddy’s mom is there. The patient also has a fever, meaning Masters was probably right about infection. Foreman says that since Masters has already started blood cultures, they are probably close to an answer. However, House doesn’t think they have the time. Leptospirosis seems more likely and House agrees to treat it so the team can go back to his office and tell him when Cuddy’s Mom is gone.

The patient wakes up and sees House by his bed. He wonders why House is hiding behind him.

House finally goes to confront Cuddy’s Mom. However, she apologizes for drinking too much and being difficult. She calls him a pain in the ass with a God complex, but realizes he was nice to her because he loves Cuddy. She also threatens to kill him if she hurts her. However, when Cuddy's Mom says she’s going home early because she caught something from Rachel, House gets an idea.

House asks if the daughter has had a rash, itch or fever. When the mother says no, House wonders why she’s not at school. When the mother says there’s something going around, House immediately hits on chicken pox - harmless to children but often fatal to adults. However, the patient has no blisters. House tells them they don’t present in 5% of cases. House starts him on anti-varicella gamma globulin.

The patient slowly improves and the wife comes to see him again. He tells her that her band has more gigs because of his new found fame and he’s going out on the road for a few more weeks. Taub overhears and tells her it won’t be that bad. She says he’s always going out on just one more tour and it’s tough to love someone who keeps disappointing you.

Masters cultures also confirm varicella. She comes by to gloat.

Taub goes home to tell Rachel he want’s a divorce. He’s realized Rachel isn’t happy with him and his affairs have driven them apart.

House tells Cuddy she’s surprisingly normal given her genetics. He gives Cuddy a bottle of sedatives as a birthday present. However, House can’t spend the evening with her because he’s going bowling with Wilson. However, he goes to Wilson to ask to get out of bowling so he can be with Cuddy.

Taub is alone on the street looking at his billboard. He takes paint balloons and starts throwing them at the billboard.

Retrieved from "https://house.fandom.com/wiki/Larger_than_Life?oldid=16321"
Community content is available under CC-BY-SA unless otherwise noted.