Start a Wiki
watch 01:11
The Loop (TV)
Do you like this video?
Merry Little Christmas 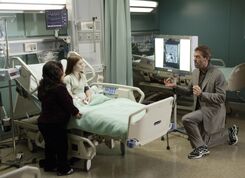 Maddy: "Being little is not the same…"
House: "You and I have found out that being normal sucks. Because we’re freaks. The advantage of being a freak is that it makes you stronger. How strong do really you want her to have to be? You told her what you had to tell her. Now you tell her you lied. Even if you didn’t."
―Merry Little Christmas

Merry Little Christmas is a third season episode of House which first aired on December 12, 2006. Tritter offers House a deal and to put pressure on House, Cuddy cuts off both his work and his Vicodin. However, Cuddy is treating a young woman with dwarfism and, without House, she and the team can’t seem to find any answers of their own. House spends his free time trying to score narcotics.

Tritter and Wilson greet House. Wilson tells House he has told Tritter about the forged prescriptions. Tritter offers House a deal: he will have to go into rehab, but will serve no jail time. House believes that Wilson may be cooperating with Tritter to get his own and practice back. He turns them both down flat. Tritter tells him to either take the deal within three days or go to jail and lose his medical license. House tells them to get out of his office.

Wilson runs after House to tell him that rehab won't be that bad and threatens to get Cuddy to back him. House breaks in on Cuddy, who is treating the short-statured daughter of a dwarf. House can't resist making jokes and starts making a diagnosis of the daughter. He guesses that Cuddy has no idea why the daughter's lungs collapsed and asks for the patient’s chart and his own Vicodin.

House gets his team together to talk about the daughter. Cameron thinks the daughter's dwarfism is also suppressing her immune system. This would explain a negative test for tuberculosis even if she had it. They plan a gallium scan to spot any infections. House keeps making fun of the mother's height. The mother gives back as well as she takes it though. House makes a pass at the mother.

The gallium scan is inconclusive. Foreman is thinking about lung cancer. House thinks that there is a problem with the liver—the brightness of the scan in that area is lighter than the brightness of the other parts of the body. House orders his team to ultrasound the liver, but Cuddy bursts in and tells House he is relieved of his duties, hospital privileges and his Vicodin is cut off until he takes the deal. He tells Cuddy that she will be begging him to take the case before he begs for pills.

Meanwhile, House goes to the clinic at St. Sebastian’s Hospital faking an old auto accident injury. The Clinic Doctor offers him codeine and gabapentin. House manipulates him into suggesting Vicodin, but the doctor won't give opiates to a new patient. The doctor finally figures out House is a doctor and calls security.

As they begin a test on the daughter, she loses consciousness and her breath smells fruity, an indication of diabetic ketoacidosis and failure of the pancreas.

Cuddy comes to House to tell him about the disease affecting the pancreas to take the deal and help the patient—she's producing no insulin. House tells her to give him pills and throws her out, telling her she will have to deal with the patient's mother if she dies.

The team talks to Cuddy about keeping House off the case. They argue about whether cancer or an autoimmune disease is responsible for the disease. Cuddy orders a lumbar puncture and a test for Lupus. The mother believes team has no idea what is wrong and asks why House isn't on the case. They tell her that House is sick.

Cameron goes to see House who is suffering from withdrawal. She treats cuts on his arm and asks for help on the case. She realizes House cut himself to release endorphins. House thinks it is Still's disease, a minor infection may have triggered an autoimmune response.

Cameron comes back to Cuddy with House's diagnosis. She tells her House is in pain, but his powers of diagnosis aren't affected. They go ahead with the treatment.

House comes in telling Wilson he only has one day to go before the deal runs out. House is clearly suffering from withdrawal and asks for a prescription to help his nausea. Wilson tells him to go to rehab to get it. House sneaks a look at one of Wilson's patient files. He breaks in on Wilson while he is meeting with a recent widow and confronts him about the patient. The widow asks House to leave. Wilson realizes that he came in to steal the patient's oxycodone and takes it back.

Wilson and Cuddy agree that House's diagnosis makes sense and that they didn't think of it. Wilson goes to Tritter and reneges on the deal because House saves lives others can't save. Tritter argues House doesn't need the Vicodin, but Wilson says he will refuse to testify despite the threat of jail time. Tritter says both Wilson and House will go to jail.

House tricks the pharmacist into giving him the oxycodone destined for the dead patient. The pharmacist gets House to sign the log, and House takes the pills himself.

House is in the cafeteria when a Little Girl in a wheelchair asks for one of his french fries. They start arguing about whether her stuffed toy is a bear or dog. Cuddy arrives to tell him that his diagnosis of Still's was wrong and offers him Vicodin for his help with the case. From his demeanor, Cuddy realizes that House got his hands on some pain meds. She tells him the disease is a tossup between cancer or autoimmune. House tells the little girl that calling a bear a dog does not make it a dog. House has his diagnostic epiphany and tells Cuddy to X-ray the patient's leg.

The leg shows normal growth structure, which is impossible for a dwarf. The evidence shows that despite her mother being a dwarf and her own height, the daughter is not a dwarf. They realize that something is wrong with her pituitary gland and that Chase was right—it was Langerhans cell histiocytosis, which reacts like both cancer and an autoimmune disease. They rejected it because there were no neurological symptoms, except the one they had overlooked—her reduced height. Like the dog-bear, being called a dwarf didn't actually make her a dwarf.

House tells the patient and the mother that the condition can be treated and that the daughter will respond to human growth hormone and grow taller with treatment. The daughter resists the HGH, but House says there are lots of reasons for her to grow to normal height. The mother confronts House about how he treated her daughter and he confronts her about using her medical condition in a vain attempt to make her a better person. He tells the mother to lie to her daughter if she has to, but to convince her to take the HGH as she will be the same person but will have an easier life. The mother talks to the daughter and convinces her to take the HGH.

Wilson comes to House to talk about the patient and to remind him it's Christmas Eve, but House says that he doesn't want to spend it with people. House calls his mother and leaves her a message then continues taking pills while drinking.

Wilson comes to House's home after calling three times. He finds House passed out on the floor near his vomit, along with the prescribed oxycodone that House stole. After realizing House will recover, Wilson leaves, disappointed and disapproving of House's actions..

House goes to Tritter to take the deal, but Tritter turns him down. Tritter found out about the stolen oxycodone, so he doesn't need Wilson's testimony to prosecute House. He wishes House a Merry Christmas as he leaves.

Langerhans cell histiocytosis is rare, and gets rarer as a patient ages. About one of every 200,000 ten year olds might develop it, but that drops to about one in 550,000 for adults.

Retrieved from "https://house.fandom.com/wiki/Merry_Little_Christmas?oldid=55913"
Community content is available under CC-BY-SA unless otherwise noted.